This weekend seems to be a good time to remember that I used to be the new media department producer on the BBC Complaints online website in 2005, and that I do not do that job anymore.

Look, if you don’t believe they had a nerd like me working on it, here’s me in 2005 excited that we were publishing BBC Complaint outcomes in an RSS feed. To be honest, I find the idea that I was working on anything as long as sixteen years ago mildly horrifying.

Anyway it caught my eye that the BBC have been receiving such a volume of complaints about coverage of the death of the Duke of Edinburgh that they’ve made a special promo for it to streamline the process. 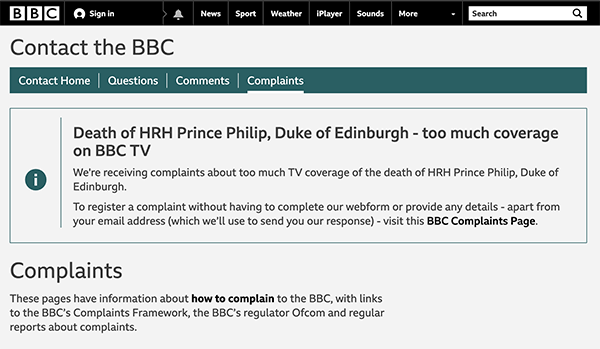 It’s the kind of thing that is, on the one hand, decent UX: you’ve streamlined the process for the user.

And incredibly annoying, because you find that what they are actually doing is simply harvesting a big long list of emails to presumably send a bland response to in a couple of weeks time, so you can find loads of people angry on social media that they couldn’t leave comments and that their complaint will essentially not be read by anyone at the BBC.

And it has also still managed to offend people implacably disposed to being annoyed about the BBC anyway – “Disgraceful! The anti-British BBC has set up a form to encourage complaints about the volume of coverage of Prince Philips death” as if without the form there wouldn’t have been complaints.

I mean presumably it allows the BBC to say “Everyone is angry about the way we handled this so therefore it was probably fine”. Expect a week of culture war discourse antics over the numbers of complaints and the live viewing figures and more.

As I mentioned in my newsletter yesterday – [Have YOU subscribed?] – I’m minded that I often think about how when the Queen dies, there won’t be a single person working in a single newsroom in the UK who has ever covered the death of a British monarch before, but there will be 1,057 people-per-second on Twitter telling us we are a disgrace because we are “doing it wrong”.

Also I’m reminded by this 2007 blog post I wrote for the BBC’s Internet Blog that:

“One of the things I used to do in my first job at the BBC in 2000 was to answer the email that came in via the ‘Contact us’ link at the bottom of search results pages. I used to get about 100 a day. Every day. All expecting a prompt, polite and correct response back from the BBC on whatever topic they had emailed about.”

Dear god, can you imagine?

by Martin Belam, April 10, 2021
I do live blogging, news stories and quizzes at the Guardian, and help cover Eurovision and Doctor Who for them too. As a journalist and designer I’ve spent over twenty years building digital products for the likes of Sony, Guardian, BBC, Natural History Museum and Reach. You can contact me at martin.belam@theguardian.com. Sign up to get my blog posts sent to you via email.
← Friday Reading S11E15
It is a monochrome world →