Great piece by Heather Bryant on why people will pay for media but not journalism. Her gist of what differentiates Netflix and a news source includes this list:

“In order for me to have a sense of what I’ll get from any one news organization, I need to know the following things and then make a best guess of what’s likely to result from the mix:
– past coverage
– current events they are likely to cover
– do they run wire coverage
– if they have funded reporting projects from a special grant
– what their top reporters are known for covering
– what their editor and publisher’s editorial priorities are
– what their publisher’s current opinions are about democracy and objectivity
– what’s their current staffing level
– whether they have let their copyeditors go
– who owns them
– how competitive they attempt to be with other newsrooms
– how old and white the newsroom and leadership is
– if they’re national, have they historically given a damn about things that happen beyond the East Coast?”

But I also winced at the absolute truth of this: “My 74-year-old relative with dementia can navigate Netflix. She cannot navigate her local newspaper’s website or app on her tablet.”

Google keeps pulling out little bits of articles from news articles and elevating them to look like the headlines if they are close to what a user was searching for and it is a fucking terrible idea that completely negates the journalistic effort to put things into context.

Meanwhile, I’d love to see someone calculate the annual productivity loss to journalists having to respond to bad faith complaints asserting that the facts you have reported are contrary to the conspiracy theory that the reader is wanting to waste your time with. It’s a deliberate tactic – has been since #GamerGate.

There was a massive Pokémon Go event last weekend and all the fan groups are full of my favourite type of complaint about a game that is basically a random number generator but with pictures:

Nerd #3: “Ha Ha Ha suckers, I got [INSERT SLIGHTLY HIGHER RANDOM NUMBER] you are obviously playing it like losers”

Fascinating look at trying to come up with a new way of portraying the globe with a map that doesn’t vastly distort it.

The thing is, as much as an adult I understand that different map projections have misled me about how big and how far apart places are on our planet, my mental model of earth is still totally inaccurate, and I don’t suppose can ever be fixed now.

Born In Lockdown is a collaborative writing project by people who became mothers during Covid lockdown. It’s a difficult thing to do at the best of times, my heart goes out to those who have experienced becoming parents for the first time in such strange circumstances. The project is raising money for Sands, the stillbirth and neonatal death charity.

One thing that will never stop making me laugh. I read a lot of US news these days, and first encountered the US headline style in the joke headlines in Sim City 3000 in the 90s when I THOUGHT IT WAS A QUIRK OF THE GAME, not based on how people really write headlines in America. There’s a list of all the old Sim City newsticker headlines here.

“Its body is the size of a box of tissues, slung underneath a pair of 1.2m carbon fiber rotors on top of four spindly legs. It weighs just 1.8kg, but the importance of its mission is massive. If everything goes according to plan, Ingenuity will become the first aircraft to fly on Mars. In order for this to work, Ingenuity has to survive frigid temperatures, manage merciless power constraints, and attempt a series of 90 second flights while separated from Earth by 10 light minutes. Which means that real-time communication or control is impossible.”

This has made me laugh too. With all the excitement of landing on Mars, someone pointed out that back in the 1960s, data transfer of images was so slow that as they got the numbers back from Mariner 4, NASA peeps basically did a “colour-by-numbers” version of the pics as they were downloaded. 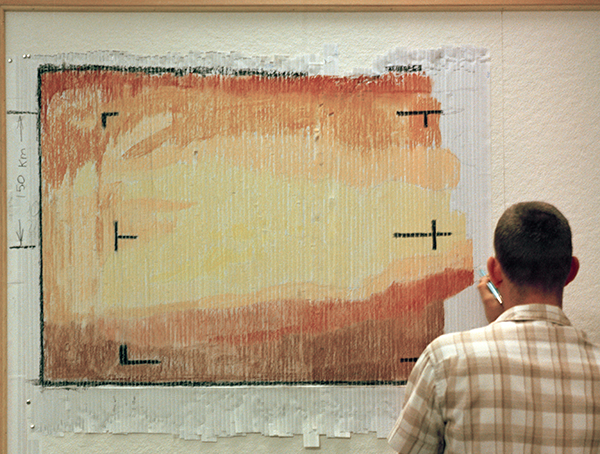 Very ‘Look Around You’. All the original actual pictures from Mariner 4 are all on the web.

For some reason my corner of the internet noticed this week that *checks notes* the Saint-Maximin-la-Sainte-Baume basilica in France has *checks notes again* the skull of Mary Magdalene held in *hang on wait what?* a gold statue with a clear glass front. Bloody weirdoes.

I suspect this is a really interesting piece about the movie Silent Running and how it predicted our modern crises, but I can’t read it because even thinking about that movie just makes me well up with tears having watched it on the tellybox as a kid.

“I gave it to a friend to listen to and said he quite enjoyed having it on as ambient noise whilst he worked. Maybe you’ll think that too – or maybe you’ll think it’s pointlessly dull. Either way it’s a record of SOMETHING, and whilst recording it I slightly spooked myself with thoughts of a trains system still operating in the apocalypse after the people had gone.”

Rob has also recorded the sound of nothing happening on the London Underground for a considerable length of time.

Nice piece from former BBC colleague Jem Stone about missing the rituals of going to football, with a pay-off line here that made me LOL.

“On March 7 last year I went to my last football match, a trip to Molineux with my son. The usual away day rituals: the anticipation the night before, setting the alarm. Those jokey conversations as the train pulls away from Euston with random Reading fans on their way to Birmingham. Finding a McDonald’s for the boy and getting lost walking around the ring road several times because I’d calculated that we needed to arrive ‘in good time’ – a ludicrous two-and-a-half hours before kick-off. And something unusual once we were inside the away end – the most intense hand-washing in the gents that I’d ever witnessed.”

Regular readers will know that I love the Discontinued Notes blog by casmilus.

“Of course if it was made nowadays The Last Train wouldn’t be 6 episodes on ITV, it would be at least 3 13-episode seasons on Netflix or Amazon. The story up to the end of episode 4 would expand to be season 1, episode 5 in the ‘sealed village’ has the potential to become season 2, and I think episode 6 could be season 3 and probably a season 4. But that thought would have been possible back in 1999 as well, since there had already been since a long post-apocalyptic saga running up to nearly 40 installments: the original run of Survivors from 1975-7. There was an attempt at remaking that in the same era as Last Train but it didn’t have legs and perhaps no one thought long-serials were the future.”

“The backdrop shifted and changed” – one person tells their particular story of how the Fall was woven in (and out) of their life.

There’s something magical about the way some fandoms will wrap in and fill the hole left by the mystery of the artist. Aldous Harding’s lyrics and meanings are almost impenetrable. Step forward the start of a series of essays of close readings of the songs by Claire Mabey: The ferret and the egg

Pick up my 80s sounding cursed and haunted electronica about the paranormal from my Bandcamp page.

by Martin Belam, February 26, 2021
I do live blogging, news stories and quizzes at the Guardian, and help cover Eurovision and Doctor Who for them too. As a journalist and designer I’ve spent over twenty years building digital products for the likes of Sony, Guardian, BBC, Natural History Museum and Reach. You can contact me at martin.belam@theguardian.com. Sign up to get my blog posts sent to you via email.
← Friday Reading S11E08
A one-line review of every #TimsTwitterListeningParty I joined in February 2021 →