Nobody has asked for this. It is more for my benefit than yours, I guess. It’s a monthly series now too, sort of. Links go to the artist website. Maybe your interest will be piqued by one of the reviews. Maybe you’ll scroll straight past. Maybe you’ll unsubscribe thinking whatever did I ever see in this blog? 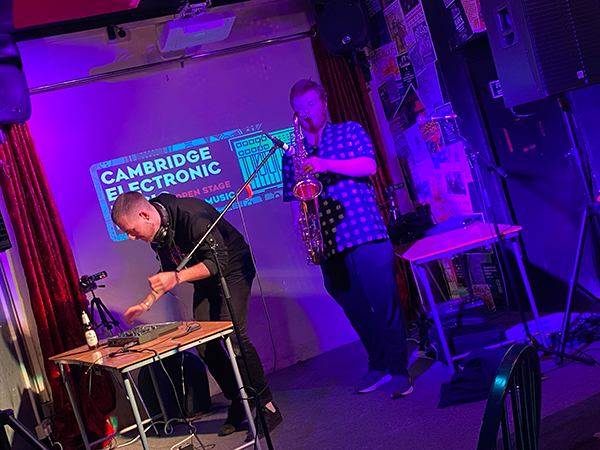 Zonic, The Blue Moon, Cambridge, 17 August – Zonic name-checked OMD, Björk, Madonna and Yazoo as her influences and she does 80s-tinged electropop and the song Those Dark Eyes in particular sounded like it had bounced straight out of the Vince Clarke hit factory. 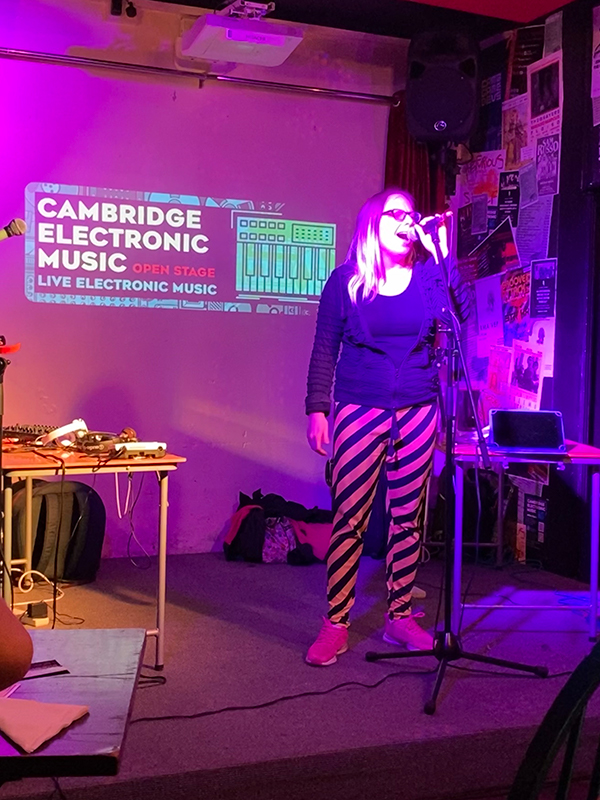 Robin of Loopsley, The Blue Moon, Cambridge, 17 August – Robin of Loopsley makes what I can only describe as rural hip-hop with songs about scarecrows and the perils of leaving Tring for the nearby urban sprawl of Hemel Hempstead, he does it all by beat-boxing into a loop machine and rapping over the top and it is skilfully done and makes me laugh a lot.

Chasing The Dark, The Blue Moon, Cambridge, 17 August – Chris describes himself as “Independent Alternative Eclectric Gothic Rock with a Steamgoth twist” and it was certainly very dark with lyrics like “get the knife / cut the skin / let the blood flow”, I enjoyed it though, it had quite a melodramatic flair to it, imagine if Jim Steinman was producing Clan of Xymox. 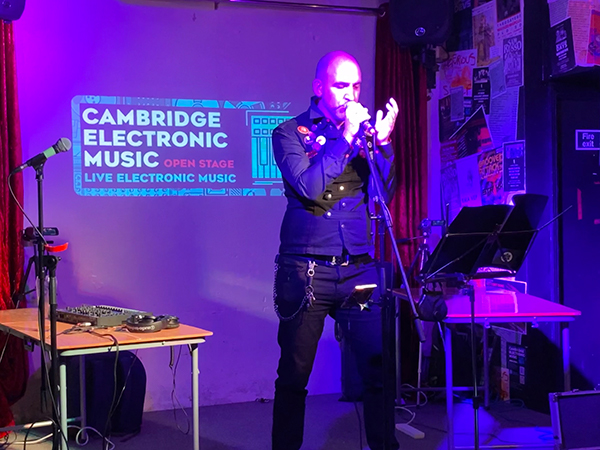 DPM, The Blue Moon, Cambridge, 17 August – DPM is a collaboration between Andrés Markmann and Diego Poupin, who used to go to school together in Chile and then ended up making music together in a pandemic with one of them in New York and one in London, I think it was the first time the stuff had been played live, pretty solid electric pop, not quite as doom-laden as Chasing The Dark but still with quite an edge.

Martin Christie, The Blue Moon, Cambridge, 17 August – The Godfather of EMOM himself got Alex from “Alex and Ben’s Techno Jam” up alongside him to jam along with his sax while Martin played really difficult to follow lines on a synth sax sound, which was very funny, he did The Smells of London but re-tooled as The Smells of Cambridge.

Delta Family, The Blue Moon, Cambridge, 17 August – An interesting sort of prog-rock/electronica combo with two people on treated guitar and bass and someone else with the electronic boxes, it was quite ambient and very nice.

Rude Mechanicals, Trades Hall, Walthamstow, 26 August – Home to various alumni of Swell Maps, Alternative TV, Television Personalities etc and led by Miss Roberts, they sound like swamp psychedelic cabaret, hewn from the same rocks as Beefheart and Waits and the Birthday Party and then they finished with a long drone track called Flying Lessons that suddenly sounded like a sequinned version of Hawkwind. They have a song about how if you’ve accidentally murdered your friend in a fit of jealousy, then having another glass of wine won’t help. Fun and worth catching if you like something uncategorizable and odd, but also familiar at the same time. 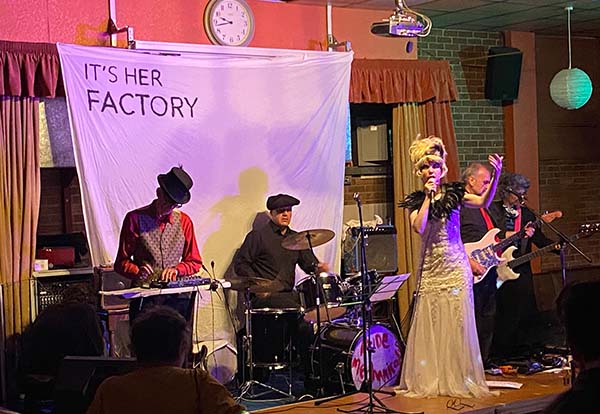 Grandma’s House, Moth Club, Hackney, 27 August – They describe themselves as “an all-female, queer punk trio”, I thought they sounded like a thrash band trying to do covers of Joy Division’s Interzone which sounded like a great idea. A lot of the songs have very repetitive minimal lyrics that at face value seem really upbeat but which are delivered in such an angry way that you don’t get the feeling they mean it when they say they are always happy and nothing is going to wipe the smile off their faces. Full of energy, I really enjoyed it, and they definitely passed my test of “Would John Peel have booked them in for a session?”. Yes, he would have done.

Katy J Pearson, Moth Club, Hackney, 27 August – Katy J Pearson has got a bit of a 70s melancholy country vibe to her voice, and to her crowd as well, as exemplified by the fact that just before she came on they played Witchita Lineman and loads of young people burst into song. It was a sold out Moth Club with an enthusiastic festival vibe to the crowd and it was obvious the band were really feeding off that energy. Songs like Hey You sound like they could effortlessly be slipped onto a deluxe edition of Rumours as a new-found track, and Fix Me Up, Take Back The Radio and Tonight were huge massive crowd-pleasers. I had been really looking forward to this – and being back at the Moth Club – and it did not disappoint. 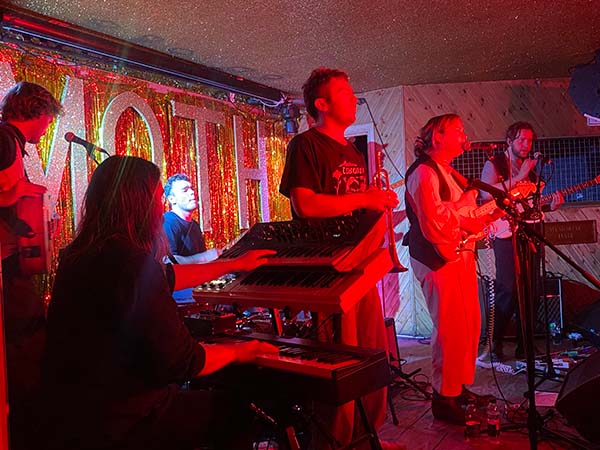 Katy J Pearson at the Moth Club in Hackney

Birthday Girl, Shacklewell Arms, Dalston, 28 August – If you can imagine Toyah and Cyndi Lauper working together on an album of Grimes and Lady Gaga cover versions, but along the way they listened to waaaaay too much K-Pop and Les Mis then that still doesn’t quite describe what Birthday Girl was doing but it was GREAT. And as an intense weirdo who stands alone on stage with a laptop making their intense weirdo music in front of people I was in awe of the intense weirdo energy she bought to this in a good way. 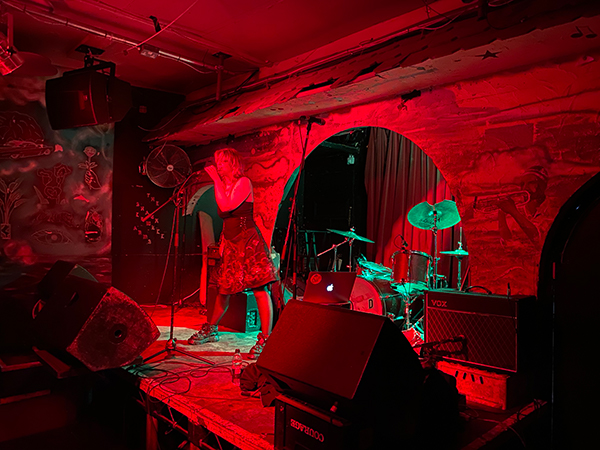 Birthday Girl at the Shacklewell Arms

Sniffany and the Nits, Shacklewell Arms, Dalston, 28 August – If your question was “What if Velma Dinkley from Scooby Doo put on some sort of a bondage dress and joined a thrashpunk band” then Sniffany and the Nits might be the answer. An absolute wall of screeching noise 👍 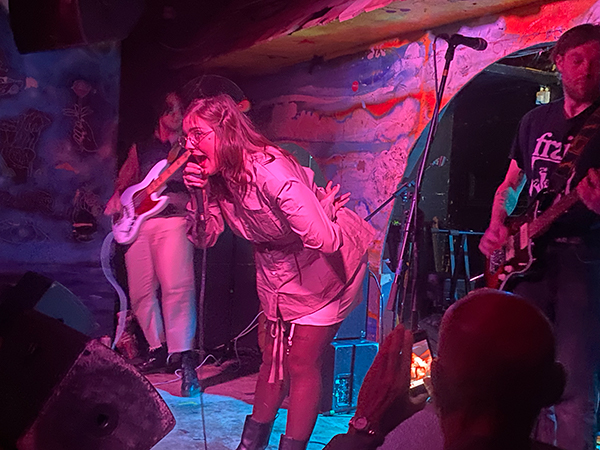 Sniffany and the Nits at the Shacklewell Arms

by Martin Belam, August 31, 2021
I do live blogging, news stories and quizzes at the Guardian, and help cover Eurovision and Doctor Who for them too. As a journalist and designer I’ve spent over twenty years building digital products for the likes of Sony, Guardian, BBC, Natural History Museum and Reach. You can contact me at martin.belam@theguardian.com. Sign up to get my blog posts sent to you via email.
← Thoughts on … Doctor Who: The Web of Fear (1968 and 2021)
It’s #Sparkstember! →