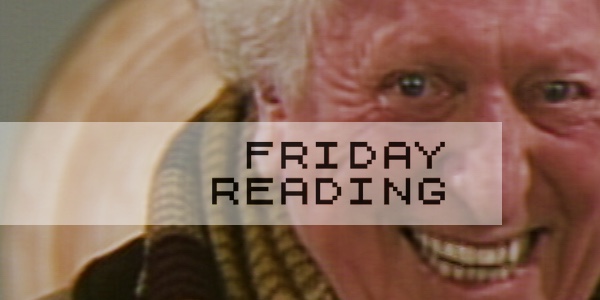 Tom Baker is back as Doctor Who and I got to go to the press screening and write about it for the Guardian.

Going beyond search, Google is promoting a single result over all others, and many are contentious, improbable or laughably incorrect – “Google Has Picked an Answer for You — Too Bad It’s Often Wrong”

“Ambition is a good thing until it becomes a cover for trying to be everything to everyone. Mashable was serving a need as a go-to resource as social media marketing took off. But was it serving a need being yet another publication covering general news?”

On the perils of expansion and losing editorial focus.

Facebook has Paid Millions to French Media Companies: Are Some Addicted?

OK. About that trust rating thing you were working on for us?

“It’s only good and proper that sometimes powerful institutions like the Daily Mail feel the heat. It’s what they do to other people every day.”

My sentient goat was well and truly got by the headlines that MPs had quietly voted that animals didn’t feel pain. What an absolutely shambles bit of reporting. Not sure that my attempt at a debunk hit the right notes, not least because some people get quite cross if you ever write anything for the Guardian saying “other media are being unfair to the Tories here”

“Accounts are publishing disturbing and exploitative videos aimed at and starring children in compromising, predatory, or creepy situations — and racking up millions of views.”

This is becoming increasingly a PR and commercial disaster for YouTube.

A German regulator has banned the sale of smartwatches aimed at children, describing them as spying devices.

Work experience opportunities at the BBC, you need to go to their careers portal and search for Q1 work experience.

City AM are looking for their first social media manager.

This is not cheap by any standards (tickets are £474 – £594) but looks really interesting – “FT Chart Doctor Live! An introduction to data visualisation”

“This event is for anyone who cares about sexual harassment in the media and wants to hear more about what we are doing” – Meet The Second Source event, Tuesday 5 December in London

“Though it’s certainly far better to know a computer language than not, remaining relevant will be a moving target as computer languages and programming environments arise, evolve, and in some cases die. A singular focus on ‘learning to code’ can impede attention to the much more important skill of understanding how technology works, and the opportunities and risks within systems and society.”

“Learning to code will eventually be as useful as learning Ancient Greek” – Robert C. Wolcott

Not entirely sure I totally buy this, but I would definitely argue that even though I’d struggle to write some working code at the moment without a refresher, understanding how computers and web browsers tick, and what can be done with regular expressions, have definitely helped me understand all sorts of possibilities about what could be done all through my career.

“Star Wars Battlefront 2 physical sales down 60% on Battlefront 1” – difficult to know how much the loot box controversy is in play here. Or how much is nostalgics like me who bought the first one because Star Wars, and then realised they can’t play online multiplayer shooting games against younglings competitively.

“Today, millions of cheap tracks can be purchased from massive marketplaces that serve as the middleman between buyers and artists. It’s a quick way for a talented musician to make a small buck. But there’s a hidden cost: You lose control over where your work ends up. In hundreds, if not thousands, of cases, a tune becomes the backing track to hate speech or violent videos. Often such use violates the license the buyer agrees to when purchasing the track. But nobody reads the licenses—and, more importantly, no one enforces them.”

“The more we reinforce the stereotypes of who writes and who reads, the more the notion of exclusivity is reinforced. It takes balls to gatecrash a party.”

“Where are all the working class writers?” – Radio 4 programme posing a vexing question for the publishing industry

Why doesn’t it ever seem to occur to people to just shut the f*** up and leave public life? So don’t read that self-serving rubbish – read this instead: “The Grim Circus of Power” – Abi Wilkinson

“The Life-Changing Magic Of Being Believed About Rape” – Emily McCombs

“I’ve been bear hugged by men twice my size in dark parking lots to ‘help’ me get in my car. I’ve had people grab at my arms while using my crutches to ‘help’ me walk more steadily. And, bonus round, I’ve had strangers kiss me in the street because I inspired them while walking home.”

“Nobody Would Have Been Surprised If I Had Died” – Katherine Fugate

“I hate the language which is used to describe Cancer and it’s hosts. Adjectives like ‘battle’ ‘courage’ ‘fight’ and ‘brave’ all get trotted out. This is mostly crap. Especially for the 50 percent of people who don’t survive. What they didn’t fight enough? So they deserved to die? It’s stupid. I never think I’m on a battle field”

“You’re a Researcher Without a Library: What Do You Do? – Investigating solutions for frustrated scholars, nonprofits, independent learners, and the rest of us.” – Jake Orlowitz

In the corners of the stands at Leyton Orient stand four blocks of flats. But what is it like being a resident?

“As he passed me, and I adopted the nonchalant look that one who does not want to appear as if he has just seen a ghost displays”

How many colours were there in a medieval rainbow? Not as simple to answer as you might think.

Mysterious object confirmed to be from another solar system.

“Space is big. Really big. You just won’t believe how vastly, hugely, mind-bogglingly big it is. I mean, you may think it’s a long way down the road to the chemist, but that’s just peanuts to space.” – Douglas Adams.

by Martin Belam, November 24, 2017
I do live blogging, news stories and quizzes at the Guardian, and help cover Eurovision and Doctor Who for them too. As a journalist and designer I’ve spent over twenty years building digital products for the likes of Sony, Guardian, BBC, Natural History Museum and Reach. You can contact me at martin.belam@theguardian.com. Sign up to get my blog posts sent to you via email.
← Friday Reading S07E05
Doctor Who Shada – some other bits and bobs from the press screening →