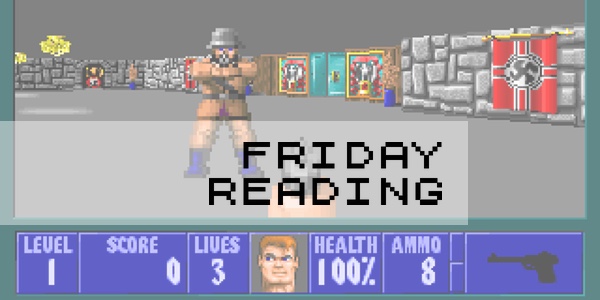 I did it. Despite decades of being very bad at first-person shooters, I pre-ordered Wolfenstein II.

Well, after a couple of years of dealing with #Gamergate and the alt-right online, for some reason I was like, yep, punching Nazis, that’s the game for me.

Here’s Tauriq Moosa on the subject: “Nazis as the bad guys in videogames? How is that controversial?”

Very sorry to read this from friend Shona Duthie on the sexism she has experienced as a sports reporter, including when covering my team Leyton Orient.

An absolutely stupendous read about one of the most incredible bits of British broadcasting history – “Ghostwatch: the Halloween hoax that changed the language of television”

Sadly I didn’t get to see it on transmission, but I have it on DVD, and even knowing the context, it is still creepy as hell.

My boss Mary Hamilton left, and has written up “13 things I learned from six years at the Guardian”

“Making systems better is not particularly sexy work. It tends to be incremental, slow and messy, taking knotty problems and carefully unknitting them…people who do the flashy things are plentiful, and people willing and able to graft on the stuff that just incrementally makes things better are in sadly short supply.”

“Traffic to biggest Slovak media sites didn’t change significantly since we have new Explore Feed and people can’t find posts by pages in their newsfeed. Really big madia have many regular readers, strong homepage, notifications, newsletters… so Facebook changes didn’t hurt them so much yet. But we already see a drop in smaller media site’s traffic. We will continue to monitor the situation.”

“A few of us at Quartz went to our personal Explore sections to find out what content Facebook thought we were interested in. What the world’s largest social network delivered was the absolute dredges of the internet, from fake news about the Las Vegas massacre to HOMELESS PEOPLE REACT TO MAGIC TRICKS!”

“The relationship between media outlets and social platforms like Twitter has always been tense. On some level, publishers know they have to be on social media, because that’s where the news happens, and it’s also where content gets shared—but at the same time, they are afraid of what might happen if reporters and editors speak their minds.”

“False information we have previously encountered feels more familiar, producing a feeling of fluency that causes us to rate it as more accurate than information we have not seen before. This effect persists even when Facebook-style warnings label a headline ‘disputed.’ We should be cautious about assuming that labels tagging articles as false are enough to prevent misinformation on social media from affecting people’s beliefs.”

Adobe are trying to convince the world that the PDF is a perfectly cromulent format for open data, and the world is laughing at them

“BuzzFeed, which built a massive audience by distributing to others’ platforms, is testing a Snapchat-like format in its mobile app. Over the past couple weeks, BuzzFeed has been showing a daily digest of content, similar to the Stories format popularized by Snapchat and Instagram, in its mobile app.”

Siri, show me the most projection and straw-manning that has ever been published on the internet. This is from a post by Gab, the censorship-free social media platform for racist a-holes

AirBnB: We wrote some AI that turns people’s sketches into production code

My friend Matt Round: This is what happens when you hire clever engineers but aren’t sure what to get them to do

“An hour after posting these two photos on Facebook, I was informed that I’d been suspended from the social media site for 24-hours for posting ‘content that threatens or promotes sexual violence or exploitation.'”

Artist who has made it her work to photograph the people who cat-call her on the street has the content removed from Facebook when she used it to illustrate the #MeToo hashtag.

They announced some companions for Doctor Who who aren’t white and the racists in the fandom absolutely shat the bed.

“The internet is a weird and scary place, and it has a lot of negativity on it”

“One homeless family was actually given the flat [for temporary accommodation] that they’d just been evicted from. They’d been long-term tenants in that flat. Their landlord evicted them, because he worked out he could get more money if he offered the flat to the council on a Nightly Lets basis. When the family turned up at the council as homeless after the eviction, the council offered them the same flat they’d just been evicted from – this time as temporary accommodation at a higher rent.”

“‘It was a big disappointment because it wasn’t something I was thinking,’ Bénard says. ‘But I wasn’t thinking as a player but more like a designer. It’s difficult to get rid of the idea of the way we want it to be played, and the efficient way is usually the opposite,'”

“The first task was my teeth. Centuries of healthy stock meant that everyone would see through my white disguise due to my delightfully straight teeth. They had a dentist produce crooked veneers, with four false fillings thrown in for good measure.”

“My week as a white non-Muslim”

Film Posters of the Russian Avant-Garde are exactly as brilliant as you suspect they are going to be. Peter Hitchens has got obsessed and spent days arguing that the Stalin movie isn’t funny. Then wrote an astonishing 2,763 words about it.

Fascinating glimpse of another world – 1945 when a post-war Dynamo Moscow team visited the UK to play a friendly with Chelsea and reportedly 100,000 got into the ground to watch

by Martin Belam, October 27, 2017
I do live blogging, news stories and quizzes at the Guardian, and help cover Eurovision and Doctor Who for them too. As a journalist and designer I’ve spent over twenty years building digital products for the likes of Sony, Guardian, BBC, Natural History Museum and Reach. You can contact me at martin.belam@theguardian.com. Sign up to get my blog posts sent to you via email.
← Friday Reading S07E01
Friday Reading S07E03 →