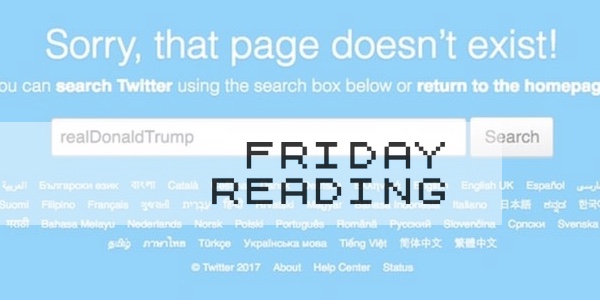 “Snap Maps is lit up with footage of shooting that just happened in lower Manhattan.”

“Introducing LabRdr: An experimental offline news app from the Guardian that knows you”

You can pronounce it how you like, apparently. They say Lab Radar. You might go a bit more doggo.

From 2013, but an evergreen list of useful tips if you’ve just become a freelance journalist.

Google News Lab Fellow Rachel Lavin, who develops data visuals, on why she is hopeful for the future of journalism while working at the Bureau of Investigative Journalism. I very much like hearing from younger journalists about how they are finding, and coping with, the state of the industry.

“Weird Facebook is monetizing” – selling out comes to us all in the end. I’ll never stop loving weird internet sub-cultures though. Never.

“A small office of Russian trolls could derail 241 years of US political history with a handful of dank memes and an advertising budget that would barely buy you a billboard in Brooklyn.”

“Fake news and misinformation should be understood as a series of societal challenges long in the making. No algorithm will solve them, because no algorithm created them.”

“Reading the news on Trump: Are we empty vessels or active filters?” – Pablo Boczkowski

Seen this being shared quite a lot – “The web began dying in 2014. Here’s how” by André Staltz

“Doppler’s core idea — that in-ear computers are the next frontier — has permeated the industry” but the start-up is still being shuttered. Why? Because they started a hardware business.

This is great on the alt-right etc talking up the idea that Antifa are going to launch a new US civil war on November 4th if you haven’t been following that particular conspiracy theory. And yet another confirmation that #GamerGate was the canary.

Five Books to Make You Less Stupid About the US Civil War. You could post them to 1600 Pennsylvania Ave NW I guess.

“But I want readers to stop and think for a moment. About how easy it was for my hard-headed and rational Mam – no ‘moon landings were faked’ believer – encountering social, economic and cultural change that I barely grasp after decades of reading up on the subject, to slip into that soft conspiracism. If it’s that easy for her, then it could be easy for each and every one of us.”

I did a well-read run-through of conspiracy theories the internet can’t resist, like that JK Rowling doesn’t exist. Or Finland. Or the Beatles

While researching that I was pointed to this extraordinary tale: This is the original legend of how the Money Pit of Oak Island was discovered.

Phone number launched as tool for women being pestered by over-insistent men closes after intimidation and death threats. Sh*tbags.

2018 Leadership Academy for Women in Digital Media in the US.

Want to work as a sports data journalist? MA Data Journalism in partnership with FourFourTwo.

I made a TARDIS in Minecraft that is genuinely bigger on the inside and I’m actually a bit annoyed this video didn’t do more on social media.

Janelle Shane trained a neural network to devise new Halloween costume ideas and if you ever wanted inspiration for nightmares like “The Twin Spider Mermaid” here you go.

The BBC’s Halloween in 1992 was off the scale. While BBC One had Ghostwatch, on the same night BBC Two had “an extravagant and hitherto unparalleled horror all-nighter entitled The Vault of Horror”. Here’s what it was like.

“I accidentally friended my ex’s new boyfriend on Facebook and then proceeded to delete my account out of sheer panic.”

So glad I did not have to date during the social media era – although obviously it was more difficult to obtain nudes in those days which was definitely a downside.

Should you put tape over your webcam? This video suggests yes, although to be honest, I feel sorry for anyone hacking into my webcam to try to get off.

Grim but interesting piece on the mental health impacts of working in a slaughterhouse.

We spoke to the former head of safety at British Rail about the reality of finding a body on the tracks. What It’s Like Dealing With Railway Suicides.

I think Nadine Shah was the best gig I’ve seen this year, she’s playing the Roundhouse in 2018 and you should get right on it.

Higher Than The Sun is a book about four albums released late in 1991 – Screamadelica by Primal Scream, Foxbase Alpha by Saint Etienne, Bandwagonesque by Teenage Fanclub and Loveless by My Bloody Valentine, and how, long before they discovered Oasis, Creation Records took on the world and nearly won.

Love this: “Sadly, the Olympians didn’t feel a pie and a pint would fit into their nutritional plans and passed.”

Evergreen seasonal piece: “Guy Fawkes wasn’t a freedom fighter. He was a religious terrorist, and not even one of the good ones. The Jacobean equivalent of one of the minor characters from Four Lions.”

Absolutely laughed my b******s off at this exposure of Russian bots influencing Brexit which named a load of my friends who are actual real journalists at major news outlets. #UsePens though. Always #UsePens.

We don’t deserve her by Martin Belam, November 3, 2017
I do live blogging, news stories and quizzes at the Guardian, and help cover Eurovision and Doctor Who for them too. As a journalist and designer I’ve spent over twenty years building digital products for the likes of Sony, Guardian, BBC, Natural History Museum and Reach. You can contact me at martin.belam@theguardian.com. Sign up to get my blog posts sent to you via email.
← Friday Reading S07E02
Friday Reading S07E04 →