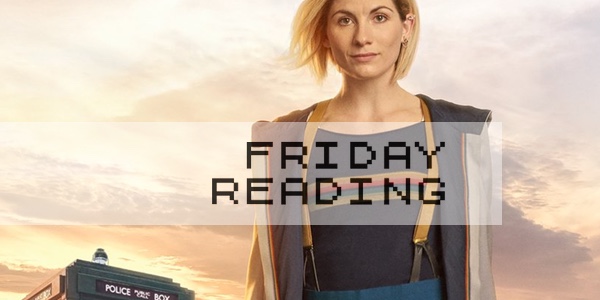 This is long and nerdy but worth reading. The long story short is “If you are a parent and your kids watch stuff on YouTube, you should know that there are people maliciously clogging up YouTube with mass-produced animations that look like kids videos but which aren’t.”

I can’t endorse this enough from Nesrene Malik: “Now sexual harassment is a campaign against men? Get real”

She described the piece on Twitter: “I wrote this on how influential media men are losing it over sexual harassment because they have lived without rules for too long. Coren, Liddle, Hitchens, White, Goodhart, O’Neill, Murray and all the other over promoted/over exposed mediocrities freaking out because they have no skills but their class and gender.”

“Metropolitan journalists are in a bubble — demographically and intellectually. Elite journalists, especially, are increasingly drawn from a highly talented but very narrow range. Oxbridge PPE, journalism school and internships is the classic pathway that inevitably favours those from a relatively privileged homogenous background. They then confirm their biases on Twitter. Social media might have made journalism more open and accountable, but largely to each other, not to the wider world.”

Facebook tried an experiment where it promoted comments to the top of the feed under news stories if they said the story was fake because…oh I don’t know…because product managers and developers continue to believe that complex editorial problems can be solved by applying regular expressions?

“We have due process and that process starts with the leak, it doesn’t end with the leak. We simply can’t say that there has been no illegal activity revealed by the Paradise Papers until appropriate authorities have investigated the documents and brought prosecutions. For now the best we can say is that we are all innocent until proven guilty.”

George Turner with some thoughts on the ethics of how journalists report the tax dealings in leaks like the #ParadisePapers.

I always thought 9/11 was the day when Google, in particular, realised that search needed to handle breaking news in a special and different way to the regular indexing of the web. But this is a disturbing trend at the moment: “Once Again, Google Promoted Disinformation and Propaganda After a Mass Shooting”

“That simple action changed the way I looked at my ex wife. That constant reminder that I should forgive her, led me to accept the way things happened at the end of my marriage, and embrace a new way of dealing with the depression that I was drowning into.”

Thoughtful from colleague Gary Younge here about the ethics of interviewing racists.

“I’ve become accustomed to 21st-century racism being far more sophisticated, and we were concerned about giving him a platform. We didn’t anticipate that he’d bring the gallows and the rope and finish the job himself in such ostentatious fashion.”

“Why interviewing Richard Spencer was a risk worth taking” – Gary Younge

The video of their encounter is absolutely must watch material: Gary Younge interviews Richard Spencer: ‘Africans have benefited from white supremacy’

+++ JOB AND WHATNOT INTERLUDE KLAXON +++

Robyn Vinter says: “I would like to please commission more professional writers for @theovertake (paid!). DM me, especially but not exclusively, if you’re a person of colour, working class, disabled, LGBT. I like features about social issues and people’s lives”. More here, including one of the best disclaimers for trolling abuse I’ve ever seen

Interactive Journalist at The Times & The Sunday Times. Closes 10th November, get your skates on.

Journo Resources is, it says, your complete kit* to starting out in the journalism industry. [*May not include making you a well-off white male moaning that he can’t touch up the intern anymore]

The Museum of London is embarking on a new digital collecting project around the first generation of web designers, digital agencies, artists that created the very first websites in London.

+++ JOB AND WHATNOT INTERLUDE KLAXON +++

Twitter designer Josh Wilburne blogging about the design theory behind the shift to 280 characters. Which also enabled a lot of NEE-NAW NEE-NAW NEE-NAW from the emergency services online.

Waltham Forest Football Club can trace their roots back to the 1860s, but they are in danger of not completing this season due to a funding crisis. They are crowd-sourcing rescue funds here.

Interesting long-ish read from Patrick Smith here about the growing group of people who are turning up to court and arguing that they aren’t bound by any laws made by Parliament.

SPOILER: I think they might smoke a lot of dope.

“Admiring an actor is fine, but when a 14-year-old boy has to ask people to stop calling him ‘Daddy’, things have gone too far” – “The sexualisation of the Stranger Things kids needs to stop”

“There’s a lingering question in the back of my head about the morality of mind-gaming customers into coming back to an app or a site. Already, the industry struggles with the darker side of app and screen addiction.”

No s***, Sherlock. “Meet the tech company that wants to make you even more addicted to your phone”

“I know that we probably won’t even turn the phone on, that it’ll be a good day if we buy the most coveted device on Earth and immediately break it.”

Motherboard went to Australia to learn how—and why—iFixit does its electronics teardowns. Capitalism is great, eh?

All very weird and evocative. Also *timey-wimey back to the 1600s* “A monk etches out these new printed pamphlets to show our strange and lonely etc etc”

A piece saying that “the sanitisation of shop signs in Walthamstow, northeast London, is a mistake that mustn’t be repeated anywhere else in the capital”

Not everybody in the comments agrees – here’s the council policy document on why they are trying to put a unified design framework around the borough’s shopfronts.

In a move tantamount to heresy, Luke McKernan writes “On not liking David Attenborough“, arguing that his earlier work is vastly superior and more cogently argued than Blue Planet II. A whale will almost certainly swallow him whole for uttering such a thing.

I did not know this and it has blown my mind. The first commercial application of the first ever pitch-changing device was so that TV stations could play out repeat programmes 10% faster, but keep the soundtrack at the original pitch. My mind is boggled. How the Eventide Harmonizer Expanded the Possibilities of Sound.

An amazing, touching, and important read:

“The comedian’s father killed himself when she was three. She was plagued by the fact he made no mention of her or her sister in the letter he left. Then, 30 years after his death, a box arrived”

Aisling Bea: ‘My father’s death has given me a love of men, of their vulnerability and tenderness’

A tale of fleeting happiness in the pub which will make you question the regrets you have in life: “Recognizing What They Had, 20 Years Too Late”

“Writing negative reviews now starts with stage fright, is followed by fear, then is followed by some people yelling at you across various platforms for days. I experienced this for myself last week when, after The Quietus published my critical review of Steely Dan at the O2, the notifications ding-ding of patronising scoffing from the Real-Music Dads of social media began to flood in.”

“The industry as a whole is under considerable strain as major labels move to capitalise on the increasing consumer interest in vinyl.”

Meanwhile, Sainsbury’s have started their own record label doing vinyl compilations of old stuff you can buy on 99p or stream for free…

“One of the scientists took Laika home to play with his children in the days before launch, another recalls crying and asking for forgiveness as she kissed Laika’s nose in farewell before the hatches were closed on the rocket.”

Sixty years on we look at the handful of images that remain of the little dog that helped pave the way to space. Oh Laika.

by Martin Belam, November 10, 2017
I do live blogging, news stories and quizzes at the Guardian, and help cover Eurovision and Doctor Who for them too. As a journalist and designer I’ve spent over twenty years building digital products for the likes of Sony, Guardian, BBC, Natural History Museum and Reach. You can contact me at martin.belam@theguardian.com. Sign up to get my blog posts sent to you via email.
← Friday Reading S07E03
Friday Reading S07E05 →