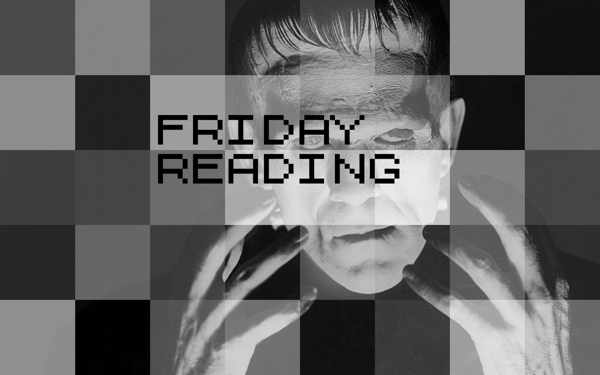 I’ll be writing lots of explainer material during this festive election period, and I’ll be aiming for all of them to have dog jokes in the photo captions. 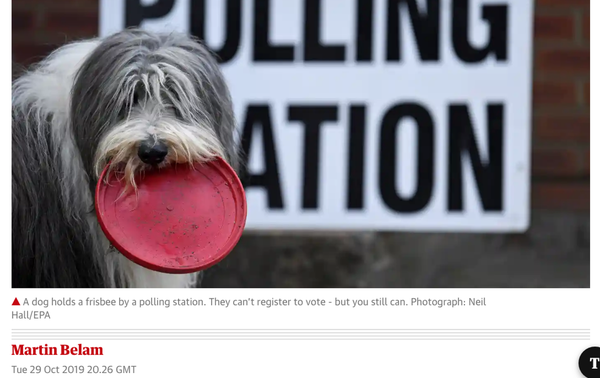 Hilarious/terrible events as, after Zuck appears in Washington saying Facebook won’t fact-check political candidates this absolute hero decided to run for office just so he could buy ads with lies in them. Facebook immediately ruled that he wasn’t a “proper” candidate and they would fact-check him, suggesting their stance that they don’t make judgements about politics is – obviousy – absolute b0||0ck$.

“Are we really doing this again? After the pivot to video. After Instant Articles. After news was deleted from the News Feed. Once more, Facebook dangles extra traffic, and journalism outlets leap through its hoop and into its cage.”

“Why the Facebook News tab shouldn’t be trusted by publishers” – Josh Constine, Techcrunch

I know ours – at the Guardian it is attention time by regular visitors that I value on my pieces. This newsletter? Subscribers, open rates, and how many people I see recommending it on social media. Do you know yours? “Why every journalist should know the ‘unit economics’ of their content”

Must confess when I read this headline I expected it to be a heart-warming Christmas tale about lovable trolls. Turns out it is about the toxic online ones. “Undercover reporter reveals life in a Polish troll farm”

“To collect the data, she set up a spreadsheet and entered each case by hand, since the state police records were in PDF files and she wasn’t able to easily extract data from them.”

The example is specifically about recording hate crimes, but that has a useful step-by-step look from ProPublica at what to think about when you are building a journalistic database that is going to help you with reporting: “Building a Database From Scratch: Behind the Scenes With Documenting Hate Partners”

“Most can be harmless until something happens that causes lots of people to search for the same term, such as a breaking news event, or a reporter using an unfamiliar phrase. In some cases, manipulators work quickly to produce conspiratorial content to fill a void. Data voids are compounded by the fraught pathways of search-adjacent recommendation systems such as auto-play, auto-fill, and trending topics; each of which are vulnerable to manipulation.”

I was at the Roundhouse for one of the Gary Numan concerts last week, and being a middle-aged Gary Numan fan who drinks too much beer, I went to the toilets about 1,057 times. The Roundhouse has some toilets with signs saying “Gender neutral accessible toilets”. On three occasions as I walked past them to get to the gents I heard people make negative or sarcastic comments about them. “Oh are you gender neutral?” and “No queue there then” etc etc

These are exactly the same toilets that have been at the Roundhouse since the early 2000s, and which would have previously been marked with a wheelchair icon, open to anybody, as they still are.

I don’t have a conclusion to draw here, except that I don’t think I ever heard people complain about the provision of toilets with a wheelchair symbol on, but now the language used around gender in the media has made “gender neutral” a thing that people moan about when queuing.

“Disability is a part of my life whether I want it to be or not. There is no ‘despite everything’, or ‘even though you’re disabled’, everything I do is with disability as a part of it. It is my default existence, who I am. I am a disabled person and I have accepted it with no expectation or desire to ‘overcome’ it, and it took a very long time to get there.”

“I am not here to inspire you” – Kat Polzin

“Kids who feel they’re monitored too closely get stressed and feel they aren’t being given privacy. One study of 500 teens reported that adolescents who felt their privacy was breached were more likely to keep secrets and less likely to disclose problems, up to a year later. Generally, kids forgive some monitoring, but when it feels excessive or (worse) covert, that became a big problem.”

“Why I Don’t Regularly monitor my teen’s internet use”

– a rubicon I am rapidly approaching.

A massive shout-out to William Turrell who looks after this site for me and has just done a server migration on it that was gloriously smooth. You should hire him if you need a web developer.

Likewise, Matt Round is available for work at the moment and he makes amazing interactives and games and web gubbins and is the genius behind VOLE.wtf and you should hire him too.

Acast are looking for an Audiovisual Producer in London.

Republic Media are recruiting for an office junior / press assistant. Send your CV with a covering letter to info at republicmedia dot net.

Anna Conrad is forward planning music content on GQ.co.uk and has a small section each month for freelancers. She is looking for timely pitches, with a strong news hook and a GQ angle for Nov onwards. Email: anna dot conrad at condenast dot co dot uk/p>

Journo Resources offer two newsletters which might be of help if you are job-hunting. Sign up here.

This is an amazing video of an octopus dreaming.

Will Crossrail actually arrive in my lifetime? The signs aren’t good.

“I do not for one moment believe him. I’m not really sure there is ‘just music’ for anyone, least of all Morrison. He is under no obligation to share any of that with journalists, of course – his music undoubtedly speaks for itself. But I’m sure there is a kinder and more graceful way of declining.”

Jaw-dropping interview with Van Morrison deftly navigated by Laura Barton who considers him to be her favourite singer/songwriter of all time. I felt every moment of the 16 minutes and 28 seconds he deigned to spend with her.

OK first off this blog is a project to document what is on 3,000 VHS tapes sitting around in a garage, which asks a whole load of questions in itself. But this entry specifically covers the legendary BBC ‘Ghostwatch’.

Do you remember that at the height of the “video nasty” moral panic in the 1980s, the BBFC’s “Calm Down Britain” experiment put soothing messages at the ends of scary videos? Watch the whole thing.

I love these stories about old disused railway infrastructure. Incredible how you could put so much work into building something that seems so permanent, then just abandon it: “To Hell: A chamber in the disused railway tunnel under Sydenham Hill”

Just like how I missed The Fall playing in Walthamstow back in the 1980s, I also missed two ex-members of The Fall talking about The Fall in Walthamstow the other week. But Jonathan Norton didn’t. Here’s a really thoughtful write-up of the event, which was all about the Hex Enduction Hour album. Norton is particularly eloquent on the more *ahem* difficult lyrical aspects of that album: “The Vulgar Streak”

I make electronic music about the paranormal. You can see what it looks like on the m-orchestra YouTube channel. I’ve got a slot at Headroom in November, so you could come and see me doing it live in Shoreditch. by Martin Belam, November 1, 2019
I do live blogging, news stories and quizzes at the Guardian, and help cover Eurovision and Doctor Who for them too. As a journalist and designer I’ve spent over twenty years building digital products for the likes of Sony, Guardian, BBC, Natural History Museum and Reach. You can contact me at martin.belam@theguardian.com. Sign up to get my blog posts sent to you via email.
← Friday Reading S08E10
Friday Reading S08E12 →