Have yourself a Womblin’ Christmas

What a lovely end of year treat a #TimsTwitterListeningParty for the Wombles’ album Superwombling was.

That was my Wombles album as I kid. I suspect the vinyl is still lurking at my parent’s house somewhere. 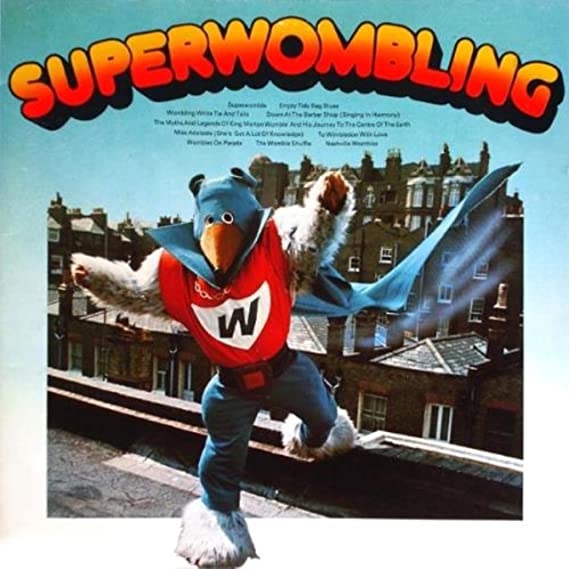 The passage of time is both sad, in the way that it brings memories and associations with it. I remember loving this album, but especially I remember having the Wombles theme on 7″ single, and being confused that one side (the Wombles theme) had ‘mono’ written on it, and the b-side, Wombles Everywhere, was marked as in ‘stereo’, yet both songs the music came out of both speakers. I have a vivd memory of my mum’s dad explaining the difference between stereo and mono to me, and lifting me up to the speakers in our front room to try and hear the difference.

But also age gives greater appreciation. As a kid it didn’t really occur to me that each of the Wombles songs were incredibly accurate pastiches or takes on specific genres or bands of music. To Wimbledon With Love was just a cracking tale of Womble spies and adventure to me back then, whereas now it is obviously Mike Batt writing his attempt at a James Bond theme. And it is the best damned James Bond theme there never was. Well, apart from the Radiohead one.

Likewise, I’d never heard of Rick Wakeman, so the extremely complex and over-produced prog rock keyboard wizardry of The Myths And Legends Of King Merton Womble And His Journey To The Centre Of The Earth was just something I took for granted.

The #TimsTwitterListeningParty experience has been an amazing one this year. It’s such a simple idea, but fans and artists have got on board with such enthusiasm and such a shared sense of love for the music. Especially in the earliest days of national lockdown it was fantastic to have something to look forward to at the end of the day. During the summer it was cathartic to be able to get out of the house, and sit over on the field near me with my headphones on, a couple of tinnies in a paper bag like a proper wrong’un, listening to music as evening turned to night and then the Town Hall security guards tried to move me on.

Throughout the year it has been brilliant to have direct personal conversations on Twitter with people like Lloyd Cole, Martyn Ware, the bass player from Haircut 100, David and/or Peter at Field Music, and the quite lovely experience of Helen Ganya Brown, who records as Dog In The Snow, saying she was thrilled I had listened to her LP as she had been reading my US politics coverage. It’s just been brilliant.

And also at times weird. Stephen Morris quietly joining in the Joy Division ones that Peter Hook was running without using the hashtag, and then Peter Hook noticing and having a massive blast at him for it. Kevin Rowland from Dexy’s essentially saying he hates all his albums, that the production on them is terrible, nothing sounds like how he wanted, and just being met with waves and waves and waves of undying devotion in return. Curt Smith calling the highlight of Mother’s Talk, the sequenced bass and fairlights bit at the end of it, a load of nonsense.

Because I am a total nerd I’ve kept a spreadsheet of course. Of the 600+ listening parties that Tim Burgess has run, I’ve listened to 263 of them. I’d pretty much stopped listening to albums in full, moving more to streaming playlists, so it has meant a huge shift in my music consumption.

There’s been albums that I know and love backwards, like the Lexicon of Love, Cupid & Psyche 85, The Remote Part. There’s been rediscovering albums that I played to death and then haven’t listened to for decades, like Happiness and The Raw And The Cooked. Realising there are bands like The Waterboys who I should have always loved just that little bit more. There’s been listening to Paul McCartney with Paul McCartney. Actual Kylie. Fab new albums like the Catherine Anne Davies and Bernard Butler LP or the new Nadine Shah LP getting a well-deserved spotlight on their release.

And loads of new discoveries and bands and artists I can’t wait to see live for the first time now that I’ve found them: BC Camplight, Dog In The Snow, Field Music, Katy J Pearson, Keely Forsyth, Lovely Eggs, Lucid Dream, Penelope Isles, Daniel Avery, The Ninth Wave, Penelope Isles and Shearwater among others.

Plus I’ve met a few other people on Twitter who have been regulars at the #TimsTwitterListeningParty with similar taste, and that’s been lovely too.

A wish list for next year? Kate Bush. Kraftwerk. Propaganda and Claudia Brücken and anything from the ZTT stable. The Wolfgang Press. Depeche Mode. More of The Fall. Talk Talk and/or Rustin Man. FEWS. A Place To Bury Strangers. David Sylvian – even the weird ones would be fine. Laura Jean. Julia Jacklin. Lana Del Rey. Section 25. Pet Shop Boys. Swans. Clan of Xymox. More of The Cure. Cabaret Voltaire again. LCD Soundsystem. More Duran Duran. The list is almost endless.

And above all, thank you for reading this blog and newsletter. I wish you all a very merry Chirstmas and a happy new year.

by Martin Belam, December 24, 2020
I do live blogging, news stories and quizzes at the Guardian, and help cover Eurovision and Doctor Who for them too. As a journalist and designer I’ve spent over twenty years building digital products for the likes of Sony, Guardian, BBC, Natural History Museum and Reach. You can contact me at martin.belam@theguardian.com. Sign up to get my blog posts sent to you via email.
← Friday Reading eats big dinners S10E16
Typerighter – the Guardian’s automated tool for spotting when I’ve strayed from the righteous path →