I posted about this on Twitter and there seemed to be lots of interest so here’s some more detail in an old-fashioned powerful blog post.

The developers at the Guardian have recently added a new tool to our content management system that automatically runs your copy through the style guide, and then flags potential issues for you to look at. I absolutely love it. Hopefully it stops me sending stuff through to the subeditors that is gonna make them grind their teeth. (One of our production editors chipped in to gently suggest that it very much does not stop this happening). 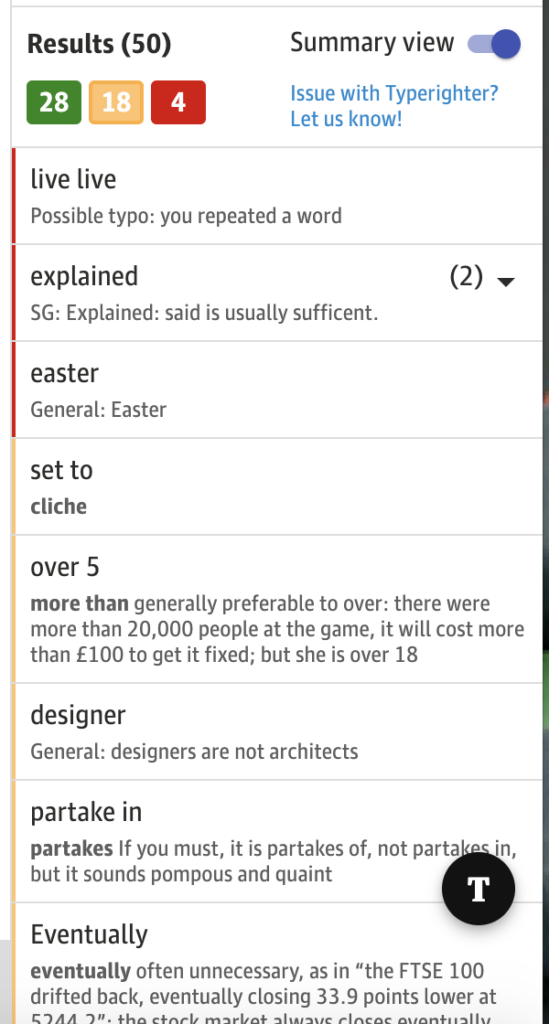 It does, however, slightly neg your writing style at times with little gems from the style guide like “Explained: said is usually sufficient”, or “Partakes. If you must but it sounds pompous”. Alright, calm down mate.

Errors get marked up inline in the text as well, and you can click on them to see why the machine thinks you have deviated from standard Guardian English. 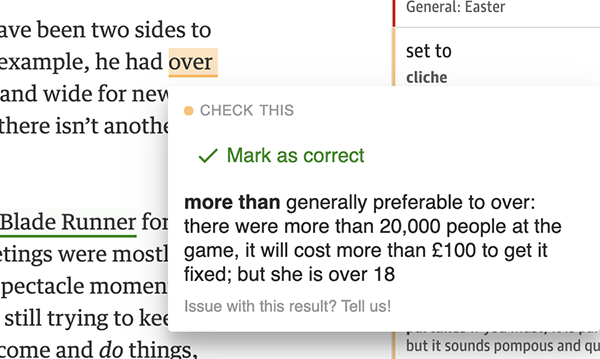 It also allows you to mark things as correct or fixed. In this case below allowing me to confirm that I meant the movie Blade Runner and have indeed spelled and capitalised it properly. 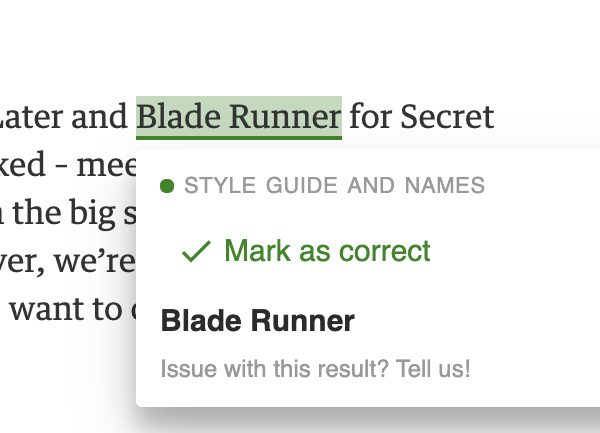 [This reminds me incidentally that ‘typewriter’ was the cheat code you typed into Manic Miner on the ZX Spectrum to get infinite lives, I thought that was important to share]

You’ll also enjoy the fact that the Github repository shows off this lovely demonstration example:

Assuming you are running a CODE environment, the response should indicate that the word ‘Grauniad’ is misspelled.

My friend Matt Round made me laugh with this recollection: “I prototyped a similar simpler tool for a corporate CMS in early 2000s but suspect the fact that everyone kept calling it The Style Nazi stopped it going further.”

Of course, some people have raised concerns about this being a way to stealth eliminate subeditor jobs. It’s not compulsory for journalists to use it or act on it before submitting copy, and given the state most journalists traditionally file copy in, I feel it might be a niche interest for them in any case.

My take is that the algorithm can spot some basic failures to adhere to the style guide, but it isn’t going to fact check, write great headlines, make my sentences make sense and sometime even shine etc, so in theory it should free up a bit of the basic fixing of bad hyphenation and phraseology, and give subeditors more time to concentrate on where they add considerable value. I can, though, see why it might cause some self-checkout machine style anxiety.

One of the Guardian’s senior software developers Akash Askoolum put it like this:

An important part of writing software: automate away the boring, repetitive work to allow people to focus on what’s interesting and truly adds value. Also a frequently unmentioned benefit is the growth opportunities unlocked as a result of no longer doing repetitive work.

Maxton Walker, one of the Guardian’s feature subeditors, was instrumental in developing it and wrote about it in late November.

A couple of years ago, as a subeditor on our Features desk, I started to wonder if there was a more efficient way of doing some of the “heavy lifting”, rather than trying to memorise the contents of the style guide. I put the Guardian’s style guide into a database and created a rudimentary app that could flag up issues in text. After showing it to some of the software engineers who build the tools we use to produce our online journalism, I teamed up with one of our many talented developers, Jonathon Herbert, and a handful of other colleagues to work on it as a side project.

To prove the concept, we produced a version of Typerighter, as it came to be known, for the news team to use on UK general election night in December 2019. We input the correctly spelled name of every candidate standing, along with their party and constituency, so that the news production team could quickly double-check crucial information as the results came in. It proved immensely useful to the newsdesk and spurred us on to develop the tool further.

You can read more of that here: Introducing Typerighter: making life easier for journalists – and stories better for readers

by Martin Belam, December 30, 2020
I do live blogging, news stories and quizzes at the Guardian, and help cover Eurovision and Doctor Who for them too. As a journalist and designer I’ve spent over twenty years building digital products for the likes of Sony, Guardian, BBC, Natural History Museum and Reach. You can contact me at martin.belam@theguardian.com. Sign up to get my blog posts sent to you via email.
← Have yourself a Womblin’ Christmas
School’s out, for January →