I’ve been to see the Sparks / Leos Carax musical Annette twice now, and here are my spoiler-free reckons …

I went for a second time because, essentially, I wasn’t sure if I’d liked it the first time, but then kept thinking about it, so thought rather than automatically buying the Blu-Ray and then never watching it, I’d go and see it on the big screen as it was intended again. I enjoyed it much more the second time around. I was more relaxed about it. First time round I wasn’t sure what to expect and as a Sparks fan I was desperately hoping they’d made something fantastic. It is certainly fantastical.

I’m not a huge film buff myself, so I maybe don’t have the right set of critical touch-points to debate the finer points of film-making. There are some – to me – odd stylistic decisions. It is nearly all-sung through, but with a very natural rather than studio sound. So on initial viewing I just was finding it quite weird that Adam Driver and Marion Cotillard are just wandering around singing all the time but it isn’t a polished vocal performance. She’s great but I don’t think you’d put Driver on Broadway. Having said that, I think the amazing opening sequence which features Sparks themselves is likely to remain one of my favourite things I’ve ever seen in a cinema for a very long time. 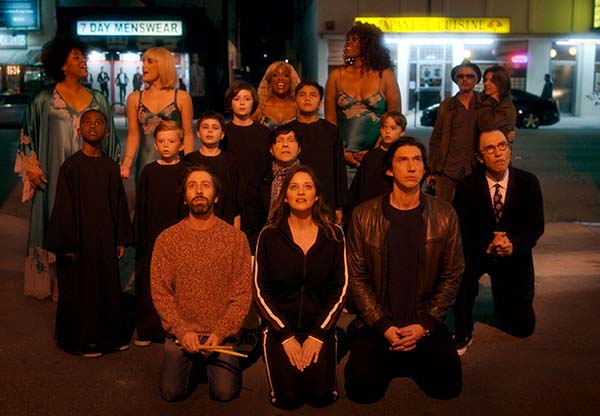 I think part of my unease musically with Annette the first time around was that it leans into the kind of minimalist repetition that Sparks developed for themselves around the time of Lil Beethoven, with lots of call and response between the “chorus” and the principal actors. But the reason My Baby’s Taking Me Home or Your Call’s Very Important To Us Please Hold work is because they drive the repetition home over minutes, and the layers of meaning build up as the inane phrases come round again and again. In Annette, these interludes are too short to work the same way, and as a Sparks fan I just wanted those exchanges to last longer and longer. I’d avoided listening to the soundtrack in advance because, well, spoilers sweetie. I’ve never gotten over idly picking up a copy of The Phantom Menace soundtrack in advance of watching the movie and seeing there was a piece titled Qui-Gon’s Funeral.

Sparks stans are very protective of Annette, and I saw them give a scathing response to a piece by Ellen Thomas that suggested the last thing we needed was another movie about a flawed white male anti-hero [THAT LINK DOES CONTAIN SPOILERS]. But I could definitely see what they meant. And Annette has been in development for years and the Mael brothers must have thought “Oh FFS!” when they saw Joker because there is a lot of narrative and structural parallel between those two films to me. We don’t get to see much of what make Cotillard’s character Anne tick, and there’s definitely a different, and maybe more interesting movie, that could have been made where the final third is viewed from Cotillard’s point of view rather than being almost entirely based around Driver’s Henry McHenry.

In interviews the Mael brothers have said that when they were writing it they originally envisaged Russell as McHenry, and Ron as the accompanist/conductor. I could definitely see Ron pulling off the couple of bits where Simon Helberg is centre-stage. Not entirely sure I could see Russell pulling off the main role though – he’s just too damn lovable. I only spotted two of the Mael brothers’ cameos in it – I think there is at least one more to find when I get the Blu-Ray/and/or/go and see it again.

And so, in conclusion, having seen it twice I really loved Annette and would happily watch it again and again. There’s some incredibly strong images that I can’t stop thinking about, that go really well with some music by Sparks. I’m just still baffled as to whether it is any good or not if you aren’t a Sparks or Carax fan already. It is clearly a polarising movie – two people walked out of the screening I went to in Norwich and never returned. ¯\_(ツ)_/¯ 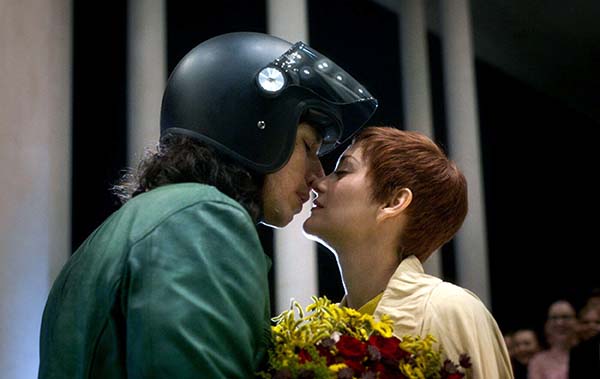 by Martin Belam, September 17, 2021
I do live blogging, news stories and quizzes at the Guardian, and help cover Eurovision and Doctor Who for them too. As a journalist and designer I’ve spent over twenty years building digital products for the likes of Sony, Guardian, BBC, Natural History Museum and Reach. You can contact me at martin.belam@theguardian.com. Sign up to get my blog posts sent to you via email.
← Clive Sinclair (1940-2021)
Richard H Kirk (1956-2021) →