Friday Reading is a weekly series of recommended reads from the Guardian’s Martin Belam, covering journalism, media and technology, and other interesting nerdy things. It is now in its eleventh season, and is also available as an email newsletter. Sign up here.

Steve Bowbrick says his new year’s resolution is to “post more awkward and inaccessible takes on my blog” and this one is a good’un:

So we (the hopeful internet people) excitedly pushed full-service hardware out to the fringes of the network — into people’s offices, homes, pockets and cars. We wanted everyone to be properly on the net — with IP addresses, a real peer-to-peer set-up. It’s clear now, of course, that the effect of creating this ultra-flat network wasn’t the democratic one we hoped for.

The effect (and this is a very long and contested story that I won’t get into here) was to put, alongside that gorgeous, rich, full-service IP stack, a full-service exploitation stack, right there on the computer in your spare room and then later in your laptop and your mobile, then in your TV and your car and your bike and your toaster…

We built the wrong internet — instead of a democratic, participatory playground we built something predatory and exploitive

Here’s how I think about it. First you cope and then you adapt. The kicker: once you adapt, you may not want to go back.

2021 is when lockdown will stop mattering – Matt Webb

Matt with some thoughts on the systems structure of how we have adapted to lockdown in the UK, a take from a techie bloke which did not get the absolute battering that Marie Le Conte did for this for *some curious reason* 🤔

“Was 2020 really all bad?”, I wonder. Have I not grown as a person? Do I really want to go back to my stressed, cramped, overly expensive life when all this is over?

The very lovely Bill Thompson read Matt’s blog post and added some thoughts of his own.

But just as the internet has changed the lives of everybody on the planet. even if they have never used a computer or phone or sent an email, so Covid-19 has changed something for everyone. The systems that surround us have had to adapt. There are fewer travellers, more checks and restrictions, increased constraints on many sorts of interaction, and a changed set of assumptions about what is safe or risky or must be endured. This is as true for someone in Kibera, Nairobi as it is in Silicon Valley, California or here in Stonesdale, North Yorkshire. The question of how we deal with this next year, and the years after, is pressing.

I’ve started this newsletter/blog post by linking to and chatting about four blog posts by four different people who I actually know in real life. Have I died and woken up in 2003? This is what the internet used to be like, I dimly recall.

Also someone I know, Helen Whitehouse has drawn a very different set of conclusions and things to change out of living through 2020 and it includes this brilliant line that drew a brutal pang of self-recognition from me: “I can be spontaneous, but only if I’ve prepared for it.”

Among this endless cycle or worry and flatness, I do know that I am incredibly lucky to only experience the side effects of the pandemic rather than loss hitting me full force in the face. My loved ones are healthy and anyone I know who has had Covid recovered seemingly well. I have a home, a family and friends and that is incredibly important, it’s an incredible position to be in.

But my point is that whether or not I worried or I didn’t, nothing changed. This year still happened and turned my life head over heels, basically upending everything I thought I knew or trusted. The process hasn’t always been pleasant, but ultimately I’m still here at the other side.

“On 2020 when you worry about everything” – Helen Whitehouse

A different newsroom, and a tad ‘inside baseball’, but interesting to read Karl McDonald on what it has been like covering Covid-19 in 2020.

“Coronavirus news: the year in the newsroom covering the story of a lifetime” – Karl McDonald.

I echo strongly that feeling that it became much harder to switch off from the news when not working, because the news was everything you and your family were actually living through. For me, I think, it really began hitting home in late January/early February when at the Guardian we were having our 8:30/8:45 morning conference, and our more general 10:00 conference, and then I was going to the foreign desk news conference at 11:00, and then there was a separate home/foreign Covid roundtable at 11:45 and you were like, oh, this has truly consumed the news.

I did some tweets about a new automated tool we have at the Guardian and everyone went “Oooo-ooooooooh!” just like Frankie Howerd on Twitter so I wrote a blog post about it: Typerighter – the Guardian’s automated tool for spotting when I’ve strayed from the righteous path

Its “emergence” in the UK this year can be seen as a significant moment, in which the theory mutated and detached from its US political origins. All of a sudden well-meaning, often not “very online” people began replicating deep internet talking points. Across social media, UK-based users began almost unconsciously parroting Q phrases and slogans, while entirely detached from the movement’s US right-wing political roots. But rather than this being the year that QAnon reached the UK, it could more accurately be said that 2020 was the year that QAnon assimilated with the UK and it’s existing conspiracy theories. And on these shores, feeding on both deep-seated cultural anxieties and our recent history of scandals, it found an almost perfect climate to grow in.

You’ll be aware of my longstanding views that #GamerGate set up the game plan for this and that everything that has gone downhill since in terms of right-wing racist sexist transphobic chan-driven internet hysteria follows on from that. And now it is sucking in your nan on Facebook, and this meme nearly ended me. 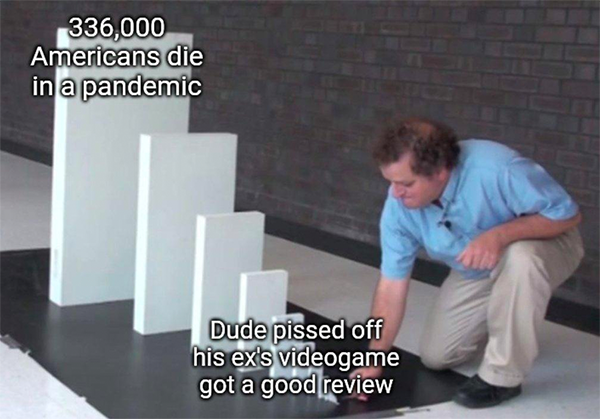 That #GamerGate butterfly effect in full

Robert Hutton brings us a month-by-month retrospective round-up of the UK’s culture wars. Remember when everyone on Twitter was shouting at tea? It’s like the bleak post-hoc analysis of that calendar that promises exactly when everybody will be shouting that A-levels are too easy these days and you can’t even wish someone a Merry Christmas in England now in case you upset them.

Has it started already? Are we taking our first faltering steps along the road to becoming another state where the rule of law is collapsing, and nationalist politicians push a social agenda that seeks to actively exclude marginalised groups? It may seem far-fetched, and we’re a long way from Orbanisation, but take a moment to consider some of what’s happened since Johnson became Prime Minister.

The “Equalites Minister” believes we should stop worrying about items she deems fashionable, which include gender and racism. She’s even claimed that when she was at school, teaching about racism was prioritised more than basic reading and writing. She’s also repeatedly kicked reform of the Gender Recognition Act into the long grass. Most people who responded to the consultation were in favour, but she’d rather listen to the voices that want to make life harder for trans people.

“It couldn’t happen here. Could it?” – Nigel Whitfield

Obviously I disapprove of crimes – except in Red Dead Redemption 2 – but this is a fun read from Helen Holmes: The Most Controversial and Ambitious Art Heists of 2020

In smaller ways, though, we have gained time too. Life is necessarily slower. A sharp drop-off in commuting has seen people claw weeks of their life back. Event-less evenings yawn out in front of us, and we plug the gaps with tactile things: cooking, gardening, installing beer taps and a dart board in the shed. Pet adoption skyrocketed and Duolingo saw their traffic spike to “all time highs” as people actively looked for new meaning, the previous routine of “work, shovel in some pasta while not really watching a 2/5 Netflix drama, bed” having lost its shine. As a result, the way we consumed pop culture this year completely changed.

“This Is the Year That Time Lost All Meaning” – Emma Garland, illustrated By Esme Blegvad, Vice

There’s some fascinating points in here about pop culture trends in 2020 mashing up material from the last few decades, but all in a quest to have something that could be a shared experience, because all our live events were shut down.

One of my colleagues lost his mum this year from a rare soft tissue cancer called Sarcoma, and the family are raising money to campaign for more awareness of this little-known disease. You can read about it and donate here.

This is such an eternally powerful piece of writing from Rebecca Hendin on sudden loss and grief: Two Funerals And A Funeral

That is one of the most News Or Fall Song? headlines I’ve ever seen.

A compilation of “effy stonem being done with everyone for five minutes” uploaded to YouTube in May of this year has over a million views. An older compilation, set to Avril Lavinge’s angst-anthem “Nobody’s Home”, has over 2 million. On TikTok, the hashtag #effystonem currently has 106.6M views. More specific iterations – #effystonemedit, #effystonemskins and #effystonemmakeup, to choose a few – have also racked up serious numbers.

The Enduring Appeal of Effy Stonem, the ‘Skins’ Character Who Keeps On Giving – Emma Garland, Vice.

The younglings have gone too far this time: Slag Wars is the future of queer reality TV. In which Sophie Anderson and Rebecca More – the nation’s *checks notes* beloved Cock Destroyers – discuss their chaotic and progressive talent series. What. The. Fuck.

Actually the weirdest bit of that piece is when it opens by saying Derek Acorah died in 2020 and honest to god if you’d told me he died in 2007 I would have accepted that, January 2020 seems soooooooooo fucking long ago.

A Doctor Who nerd from the British Museum with a little mini-doco on the fake bank notes with David Tennant’s face on them that the production team had made for a scene where the Doctor sprays free money into a busy London street to create a distraction: The David Tenner: a Doctor Who Bank Note – Curator’s Corner Christmas Special

As an electronic music maker, I’ve felt the heat when playing at open mic nights where unplugged rock, pop and folk is the norm. Firstly, I’ll spend more of my allocated slot setting up my synths and cables than performing, and secondly, my set leaves the audience clueless as to what I just performed and which bits I did live. So, if these regular open mic nights aren’t quite right for the emerging army of knob‑twiddlers, loopers and beatmakers, where do we go to perform? Luckily, some innovative new communities are emerging for the growing number of DIY circuit‑benders and modular geeks.

Interview with Martin Christie who has been instrumental – SEE WHAT I DID THERE? – in getting a thriving electronic open mic scene going which has been a useful outlet to get some m-orchestra in front of real people, has featured some really great acts, and in the true spirit of open mic, I’ve also seen some things so bad even Roy Batty wouldn’t dwell upon them.

Happy new year. I wish you all the best for it 👍

by Martin Belam, January 1, 2021
I do social and explaining stuff at the Guardian. As a journalist and designer I’ve spent nearly twenty years building digital products for the likes of the Guardian, BBC, Daily Mirror and Sony. I also make electronic music about the paranormal under the name m-orchestra. I’m @MartinBelam on Twitter, and martin.belam@theguardian.com on email. Sign up to get my blog posts sent to you via email.
← School’s out, for January
The moment has been prepared for – my first Guardian Doctor Who episode-by-episode recap →