Friday Reading is a weekly series of recommended reads from the Guardian’s Martin Belam, covering journalism, media and technology, and other interesting nerdy things. It is now in its eleventh season, and will be working from early in the morning to late in the evening. It will take many phone calls and have many meetings. Sign up here.

This piece is interesting in places, but also quotes Glenn Greenwald who soiled his nappy in public a few weeks back when some editors decided his work needed editing, so YMMV.

“These smaller services are coming under scrutiny now that the big platforms have warmed to aggressive moderation, culminating with Twitter, Facebook, YouTube’s suspension of president Donald Trump following the Capitol riot. The battle will only heat up now that Amazon pushed “free speech” social network Parler off the internet. Attention will move to smaller, mainstream services still figuring out their policies, as the precedent they set today could determine how they handle content moving forward.”

The Moderation War Is Coming to Spotify, Substack, and Clubhouse – Alex Kantrowitz

Have to confess one of the duller things in the last few weeks is watching not-we offline people wade into the online moderation debate and decide they have something important to say without *checks notes* bothering to look at the fact that we have about twenty-five years worth of prior experience dealing with this shit and the rules of engagement haven’t changed. If you don’t proactively manage community spaces, they become unmanageable. It is hard to do at huge scale and most huge scale social media websites have deliberately not tried. This isn’t rocket science here.

And this is what happens if you have no scale…“If you open a hole on the internet, it gets filled with shit.”

Roblox uses an automated system to filter harsh language and intervene when it appears that a player is trying to lure someone off-platform, for example. But Among Us shows us what popular social games look like without such tools. The result is reminiscent of early internet chat rooms, where adults and children play together in semi-private, unmoderated chats with minimal accountability. Innersloth — the four-person team behind the game — is working with limited resources to build crucial moderation tools and keep bad actors out. Despite promises that such tools would be implemented, Among Us currently contains no basic reporting mechanism or blocking tools.

‘Among Us’ Has a Moderation Problem – Eric Ravenscraft

“QAnon has often been compared to ARGs and LARPs and rightly so. It uses many of the same gaming mechanisms and rewards. It has a game-like feel to it that is evident to anyone who has ever played an ARG, online role-play (RP) or LARP before. The similarities are so striking that it has often been referred to as a LARP or ARG. However this beast is very very different from a game. It is the differences that shed the light on how QAnon works and many of them are hard to see if you’re not involved in game development. QAnon is like the reflection of a game in a mirror, it looks just like one, but it is inverted.”

This is an incredible profile here in the New York Times, of a QAnon supporter who basically gave the reporter access to all of her social media history, and you can literally track the shift.

Pizzagate primed Ms. Gilbert for QAnon, which she discovered through the YouTube videos of a British psychic. It quickly took over her life, and yanked her politics sharply to the right. Seemingly overnight, her Facebook feed switched from Change.org petitions and cute animal photos to Gateway Pundit links and “Killary Clinton” memes. Like many QAnon die-hards, Ms. Gilbert has a purely virtual attachment to the movement. She said she had never attended a QAnon rally, or even met another QAnon believer in person.

I’m equally fascinated by the left’s conspiracy mirror image. It’s funny how you suddenly never hear about those billions the hedge funds had riding on there being a no deal Brexit anymore, eh? 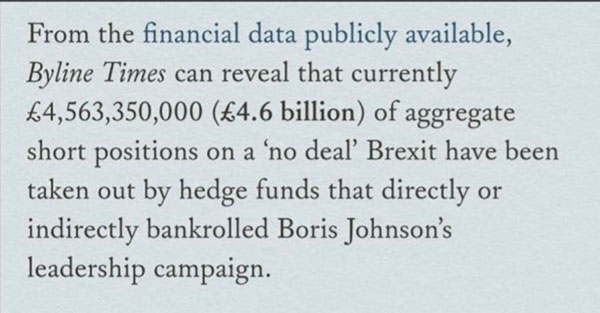 Imagine being owned online by the NZ Flat Earth Movement though. 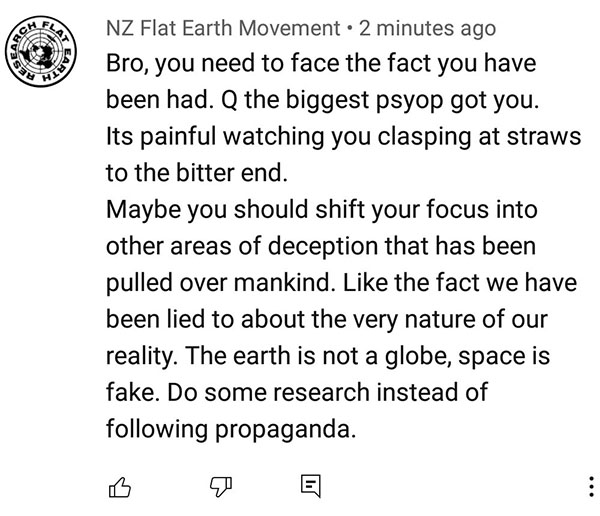 Never mind that, imagine doing live coverage for the Guardian of Donald Trump leaving the White House for the last time, and then because of Dry January, toasting his exit with 0.0% insipid warm alcohol-free Heineken? I’ve let Donald down, I’ve let myself down, but worse than that, I’ve let the entire reputation of journalists as pissed-up reprobates down.

Doxing racists is a 100-year-old American tradition – what we can learn from the newspaper that outed Ku Klux Klan members in Chicago in 1922 – Aaron Gordon, Vice

I have nothing insightful to say about grief. There is no-one “senior” left in my family. No one to head the pack. It’s a pain in the fucking arse and I didn’t expect it so soon. But I breathe one breath at a time. Live one minute, one day, one week as it comes. It’s terrible shite, but it’s all we can do.

Sam Whyte incorrectly asserts in this quote that she has nothing insightful to say about grief. She does and it is here.

During the first lockdown last year, I wanted to photograph all the London Transport Carriages empty whilst on my daily commute. I thought you may like to see.

I very much did want to see and the results are here.

I joined a Zoom call this week for a lecture by Stephen Benton on a virtual tour called “Passengers No More: lost and forgotten railways of London” and it was very much my kind of thing. And possibly your kind of thing if you like the kind of things I put in this newsletter. You can see when you can join future ones on his website.

If an aesthetic object is created without any human purpose, do we witness an accidental product of nature or do we perceive new forms of artificial intentions?

Not a fucking sausage of a clue, mate. But here’s a video of an AI generating an idea for a sculpture and then getting it 3D printed with no actual human artist supervising the finished product so y’know…

I am extremely amused to find out, via James Cridland, that this piece by Eric Nuzum has sparked some kind of online flame war.

It dares to correctly date the first ever “podcast” to Dave Winer publishing a feed to mark George W. Bush’s inauguration containing just the Grateful Dead song “US Blues” on 20 January 2001, rather than it being three middle-aged middle-class white blokes hunched round a microphone making a radio show that wasn’t quite good enough to be commissioned by a radio network etc etc.

The Story of the First Podcast Feed – Eric Nuzum, Podnews

Hahahahahahaha WTF, Stuart Ian Burns got bored during lockdown so decided to make an index of every theatrically released movie reviewed by Empire magazine since 1867 and publish it. And here it is.

There’s a petition to trial Universal Basic Income in Bristol.

Martin Laity, who runs Sailor’s Creek Shellfish based in Flushing, says he has had to lay off over 50 oyster fishermen and women because Defra hasn’t even created the form that allows them to export to Europe after Brexit.

There’s a Reuters headline went through the newswires today “Global chip shortage hits China’s bitcoin mining sector” and honestly the state of it all.

Alex Hern talking about Bitcoin “the way I would if I didn’t care about my email inbox or Twitter mentions.”

Newport County’s goalkeeper scored a goal from his own penalty area which is always objectively hilarious but then even funnier the Newport social media account had to confess “We don’t even have a GIF for him! 😅”

Via Soph Warnes, this article is just purely intentional “unintentional pun-laden hilarity” from start to finish – although you will also accidentally learn stuff along the way: First preserved dinosaur butthole is ‘perfect’ and ‘unique,’ paleontologist says

Also has an amazing pay-off at the end.

This claims to be a font based on Mark E Smith’s handwriting but I can’t get it to work on my Mac, you may have more luck. Or perhaps it will give your machine brainworms, turn that bloody blimey space invader off etc etc.

Half-hour TV doco from the eighties about the design work going into Ultravox’s packaging and stage design. Ultravox was one of the first proper gigs I went to – on the Lament tour – and I’ve recently purchased tickets to see Midge Ure play in *checks notes* Cambridge in *checks notes* 2022 in the vague hope I can ever travel or watch live music anywhere ever again. 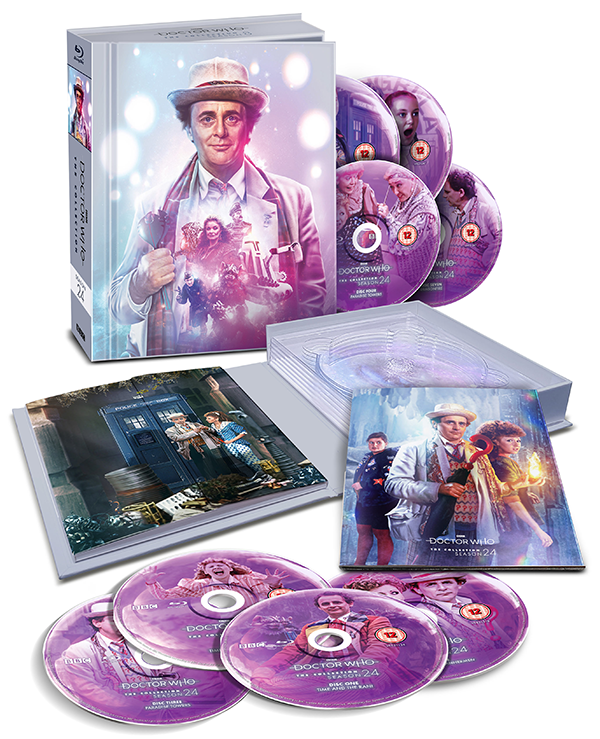 These look absolutely gorgeous, but Martin, you only just finished collecting all the DVDs. Also I 100% reckon eventually these discs will be reissued in a “Complete Sylvester McCoy” set along with seasons 25 and 26 in much simpler packaging because the BBC surely won’t let them not be available on Blu-Ray forever once these sets sell out…

Also worth noting that despite the BBC sending me an email literally with the subject line “Sylvester McCoy onscreen again” I put the box-set trailer on not knowing who was going to be in it apart from dear Bonnie Langford and so we had what in our house is known as an “oh dear dad is crying at the TV again” moment.

You know what, I think I’m just a late developer. It’s just taken me all this time to find my feet. This is the first time I’ve written songs for my voice.

Very pleased to be able to confirm that there’s a new m-orchestra EP coming – More Ghost Stories – in all good digital stores on 15 February. I’m sure I’ll do some online streaming shows to promote it nearer the time.

by Martin Belam, January 22, 2021
I do live blogging, news stories and quizzes at the Guardian, and help cover Eurovision and Doctor Who for them too. As a journalist and designer I’ve spent over twenty years building digital products for the likes of Sony, Guardian, BBC, Natural History Museum and Reach. You can contact me at martin.belam@theguardian.com. Sign up to get my blog posts sent to you via email.
← Friday Reading S11E03
Friday Reading S11E05 →