I can’t stress enough that you should read this piece about the way journalist Nadine White has been treated by equalities minister Kemi Badenoch. It’s from the FT and by Marcus Ryder. I think it gets right to the heart of how White has been treated differently by the wheels of government in response to this, and that comes down in part to race, and has different consequences because of race. Ryder writes:

“This affair has implications for both freedom of speech and the identity of who is ‘allowed’ to hold power to account. Journalists should be held accountable for what they publish, not the private questions they ask people in positions of power when preparing a story. I worked at the BBC for 24 years, and it is routine for senior journalists to be in constant contact with politicians.

But the race of the journalist at the heart of this controversy also matters. Reporters from different backgrounds ask different questions and prioritise different issues. It is no coincidence that black journalists have led the charge in covering the way people of colour are disproportionately affected by Covid-19.

Attacks on black journalists can have two terrible consequences. The criticism may clip their wings, limiting the work they can do. Or newsroom editors may want to avoid hassle and controversy and out of expediency employ people who they know are not going to be attacked. Both results ultimately limit the sections of society that are permitted to hold power to account.”

How a dispute over a journalist’s emails risks undermining democracy – Marcus Ryder, FT

PoliticsHome editor Alan White also has weighed in on this:

“The critical importance of a confidential right of reply process in the production of journalism is, in my view, simply not up for debate.

The reason is simple: it prevents disinformation. To breach it undermines a bedrock of our functioning, free, accountable press. I have lost count of the number of stories I have spiked because of a reply that showed information my team had been given in a new light. Likewise, the number of stories that have been improved, changed entirely, or made fairer, because of a thoughtful response.

I understand Westminster journalists have been told behind the scenes that what happened to White won’t happen to them. But assurances behind closed doors aren’t enough – and I’m likewise disappointed that the lobby has shown slightly less than total solidarity with a colleague from their trade.”

“Professionalism is a two-way street – the lobby’s mysterious lack of solidarity with Nadine White” – Alan White, The Critic

There’s a wonderful world-weary tone to this, but he’s not wrong is he?

“By offering newsletter tools themselves, companies such as Facebook and Twitter are clearly hoping to pull the flow of information back onto their own platforms, where they can get back to the businesses of feeding users a steady stream of content via algorithm. My fear, then, is that they’ll inevitably follow an all-too-familiar pattern: Build their own version of a promising new idea, try to crush their competitors along the way, and then proceed to ruin—willfully or by neglect—the very thing they set out to copy in the first place. Can’t they please just let us have this one thing?”

I still miss Google Reader, by the way.

This, by Sirri Rimppi, is a very depressing list of obstacles to getting work in journalism in the UK if you don’t fit “the mould” and includes loads of examples of things I’ve probably done as a recruitment manager over the years. Really grim clips include:

“When he was applying for jobs, Dr Idrees Ahmad used to add his photo onto his CV because he knew that there were harsh stereotypes attached to names like his. The photo was to show that he was just a normal guy.”

“Alexandros Theodoropoulos has gained work experience and published articles in Greece. However, he finds it difficult to demonstrate his journalistic skills to British employers. ‘I cannot use my articles written in Greek to get a job in the UK,’ Alexandros says. ‘I feel like my Greek work is sort of downgraded.'”

“Work experience gained in a different country seems useless because he cannot present examples to employers who cannot read the articles written in a foreign language. ‘I don’t know if employers pay attention to whether you are bilingual. Maybe they don’t even see that.'”

No, you don’t have to be a native speaker: bilingualism can be an advantage – Sirri Rimppi, Journo Resources

“I’ve always thought of the role of the live blogger as being a little like that of a radio DJ on a news-driven morning or drive-time show. You need to be lively and entertaining, you need to convey things quickly and simply, you need to keep reiterating the main themes as people are going to be dipping in and out, and you need to get everything right.”

I’ve had a piece published in InPublishing magazine this month, recounting my experience live blogging the US election last year. You can read it online here.

I’ve gotta be honest and say I can’t think of anything worse than spending my day trying to do everything else while also being trapped in a podcast-conference-call scenario, but everyone seems to be hot for Clubhouse, including Twitter.

“Twitter and Clubhouse are locked in a battle to dominate a new form of audio social networking that feels equal parts podcast, industry convention, and conference call. For the uninitiated, the format has people gather in virtual ‘rooms’ where a convening moderator sets a topic and invites people to speak. No new form of social media has been as promising since Snapchat debuted Stories in 2013. And like Stories, there’s a case to be made that the primary beneficiary will not be the originator.”

I saw some conservatives get very irked by this headline – “Why are journalists trying to fact-check private conversations etc etc” – but there does, it seems to me, be a bit of an issue that the whole of Clubhouse is set up so that a MuskZuckBezos-type fella or prominent politician can set up a Clubhouse room, have thousands of listeners, spout off for half-hour about how the lizard people are putting microchips in your vaccines to steal the election, and there’s no audit trail…

What will fact-checkers find on Clubhouse? – Cristina Tardáguila and Harrison Mantas, Poynter

If you’d like a reason for my long-standing absolute cold fury about Section 28 and the Tories who introduced it and then continued to fight against having it repealed until as recently as 2003, then this is the sort of thing, as tweeted by my former boss Maz Hamilton this week. They say:

“I’m 36; the piece I wrote on the theme of ‘belonging’ for my school magazine when I was 17 was quietly disappeared without any explanation or discussion, and I have only just made the connection to realise that was because it was about going to my first Pride march. That was the most insidious thing about Section 28, I think: not just that we weren’t taught about LGBT identities, but also that we couldn’t even be told what we weren’t being taught.”

“At first, in crowds, my nerve endings felt supercharged. If a stranger came near me, I jumped out of her way. In London, this would be a considerate gesture; in New Zealand, it seemed passive aggressive. Having thought I had coped relatively well with 2020, it was only when I felt joyful, safe and at ease that I realised the erosive, depressive toll the pandemic had taken. Sometimes, in a bustling shopping centre or cafe, I felt unexpectedly anguished, even tearful – overcome by a desire to accost strangers with the words: “You don’t know how lucky you are!” Instead, I stuck to telling my parents and friends, with the single-minded urgency of a survivor – all the while acutely conscious that, in leaving when I did, I had skipped the worst of it.”

‘It is only now I realise the toll the pandemic has taken’: a letter from the other side of Covid – Elle Hunt

Absolute genius from the school of Ed Jefferson with a hint of the UsVsTh3m years about it – measure how patriotic you are by drawing a Union flag on your screen while under pressure.

The future did end up weird. But just not in the flying car way we wanted:

“On Monday officials from Pinellas County in Florida announced that an unidentified hacker remotely gained access to a panel that controls the City of Oldsmar’s water treatment system, and changed a setting that would have drastically increased the amount of sodium hydroxide in the water supply. Sodium hydroxide is also known as lye and can be deadly if ingested in large amounts.”

This man was drinking the bad stuff on purpose:

“Byers’ pain cleared up (by coincidence or placebo) and he attributed it to Radithor, which was essentially radium diluted in water like cancer flavored Kool-Aid. From then on, he was convinced of the drink’s benefits, and sent cases of the deadly juice to business colleagues, girlfriends and even fed it to his racehorses. For his own part, he drank 1,400 half-ounce bottles of the expensive drink.”

It still kind of boggles my mind that we’ve had to disambiguate the “Trump impeachment” tags in our CMS at the Guardian. 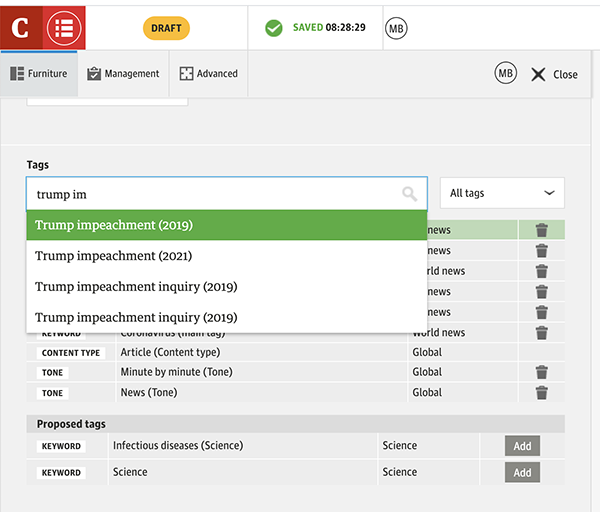 🎶 SPEND THE DAY IN A PUB 🎶 by Claire Welles is the new national anthem you didn’t know you needed.

It’s kind of impossible to pull out a quote from this interview with pioneering electronic musician and composer Hans-Joachim Roedelius because what would you pick – the bit where he basically had to fend for himself aged four, the bit where he went round Berlin as part of an art collective wearing bells on his feet in the 1960s, or the bit where he was annoying Brian Eno because he quite liked collecting his own firewood from the forest in the morning rather than getting set-up in the studio where he was supposed to be recording?

I know I’m a stuck record on this, but Brexit has literally overnight made it impossibly expensive for me to ever play my music live in the EU. Here’s Radiohead’s Colin on it:

“Adrian, our touring accountant, said it will be more clunky and expensive. Before Brexit, a carnet was just needed for Norway and Switzerland. Now it would be more like playing South America, where each country has its systems for dealing with “third countries” like us. Adrian said a £10,000 guitar would need a carnet that would cost about £650 plus VAT. The costs of travel and accommodation are already high, and the extra paperwork and expenses would rise quickly for a touring orchestra.”

I mean I don’t have a £10,000 guitar obviously, but the combined costs of laptop, keyboard, stand, pedals, projector, backdrop etc etc soon add up. I would have used to be able to just sling it all in a bag and jump on the Eurostar. No more.

You can still see me live(-ish) on the intertubes though. I’ll be putting up a special show for the launch of my new EP on my YouTube channel at 7pm on Monday. You can also re-watch Thursday’s live show here.

by Martin Belam, February 12, 2021
I do live blogging, news stories and quizzes at the Guardian, and help cover Eurovision and Doctor Who for them too. As a journalist and designer I’ve spent over twenty years building digital products for the likes of Sony, Guardian, BBC, Natural History Museum and Reach. You can contact me at martin.belam@theguardian.com. Sign up to get my blog posts sent to you via email.
← How we got where we got today – revision
Cancel empire culture →