Ist Ist, Camden Assembly, Camden, 2 December – I bought a ticket for this off the back of a great #TimsTwitterListeningParty for their debut album but then *_gestures all around_* by the time the gig was on they were promoting their second album. I was surprised that both the crowd and the band were a bit older than I was expecting. I think I said in my last set of #TimsTwitterListeningParty reviews that their sound is squarely in the middle of an [Interpol / Editors / White Lies] Venn diagram, but then so are my tastes. Enjoyed it.

Maddigan Projects, Jazzlive at The Crypt, St Giles Church, Camberwell, 4 December – Chewy was a hero for organising the night and also went first, playing some weird bowed stringed instrument that also had typewriter keys on it for no readily apparent reason. Set the tone perfectly. I’m afraid I got awfully drunk and my notes were incomplete but these were the other acts I can remember enough to review …

Arthur or The Arthurs or We Are Arthurs, Jazzlive at The Crypt, St Giles Church, Camberwell, 4 December – This was one treated guitar and a vocalist reading out of a little notebook, I think it was mostly improvised. It was very heart-on-its-sleeve. 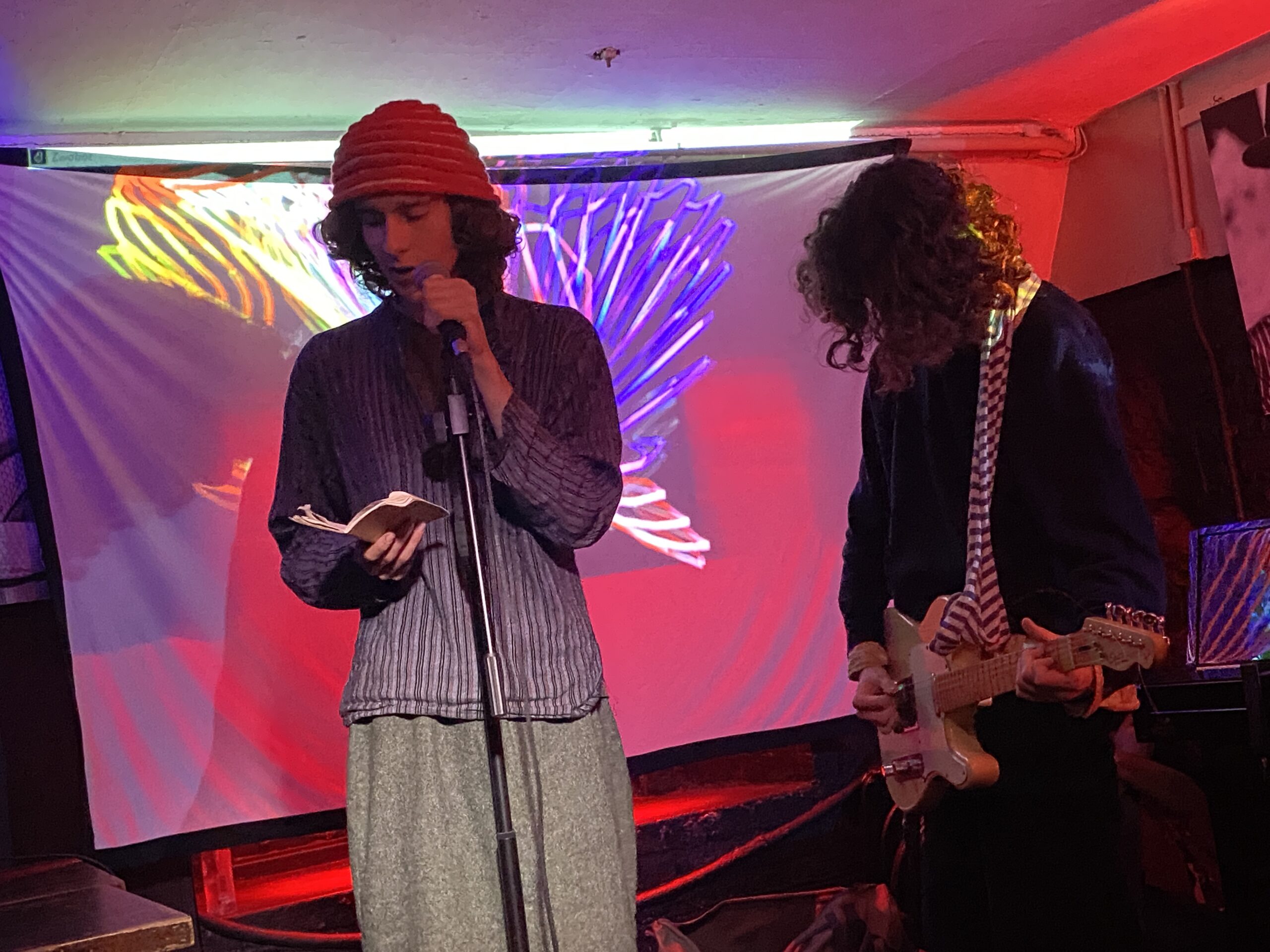 The Arthurs at Jazzlive at the Crypt

Three Recurring, Jazzlive at The Crypt, St Giles Church, Camberwell, 4 December – Absolutely fascinated with this, where the guy produced a load of great little tracks seemingly programmed and produced by one little hardware box. It wasn’t quite 8-bit, but it was certainly pushing a limited chip-palette into different directions, and seemingly all in one box. 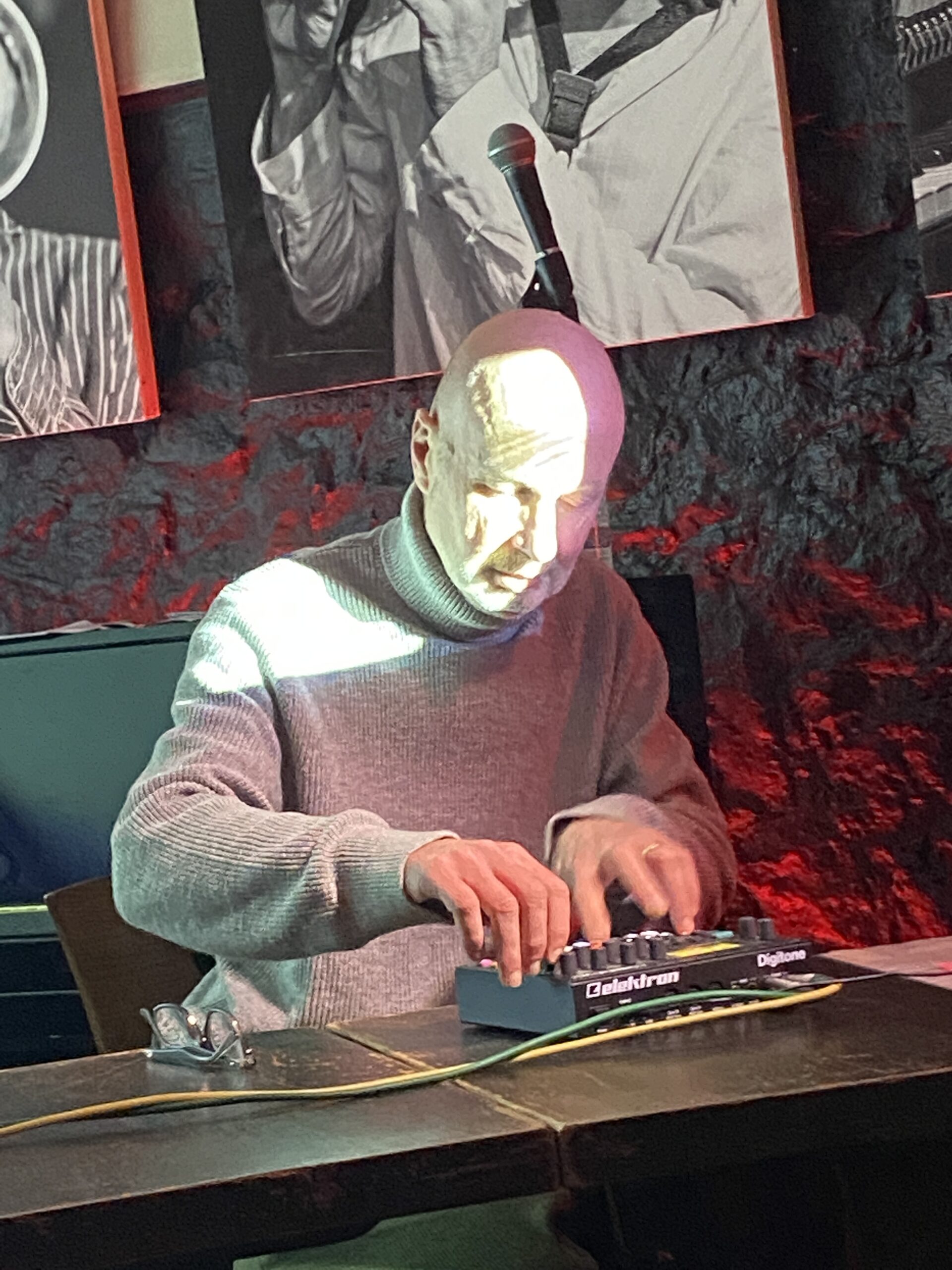 Three Recurring at Jazzlive at the Crypt

Owl Call Radio, Jazzlive at The Crypt, St Giles Church, Camberwell, 4 December – This is a project by Katherine E. Bash, it is grimdark spoken word/poetry over some very brooding electronic soundscapes and I enjoyed it. 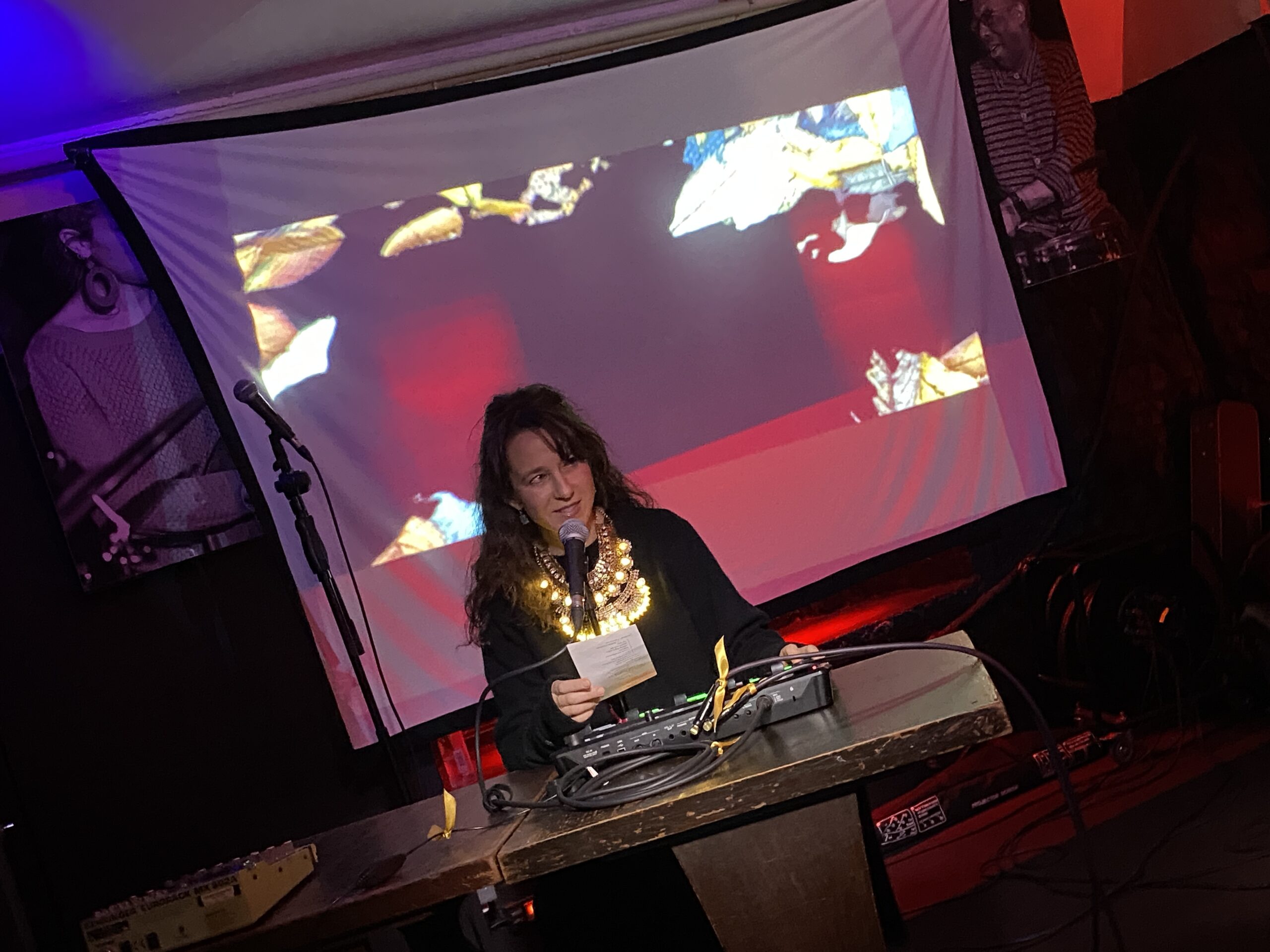 Owl Call Radio at Jazzlive at the Crypt

Gerladine Snell, Jazzlive at The Crypt, St Giles Church, Camberwell, 4 December – She was using some kind of vocal looping device to build up one long piece that had loads and loads of overlaid vocal melodies from her. I found it absolutely hypnotic. Unfortunately I fear I may have told her this 1,057 times later in the evening when I had also found too much vodka-and-Coca-Cola to be hypnotic. 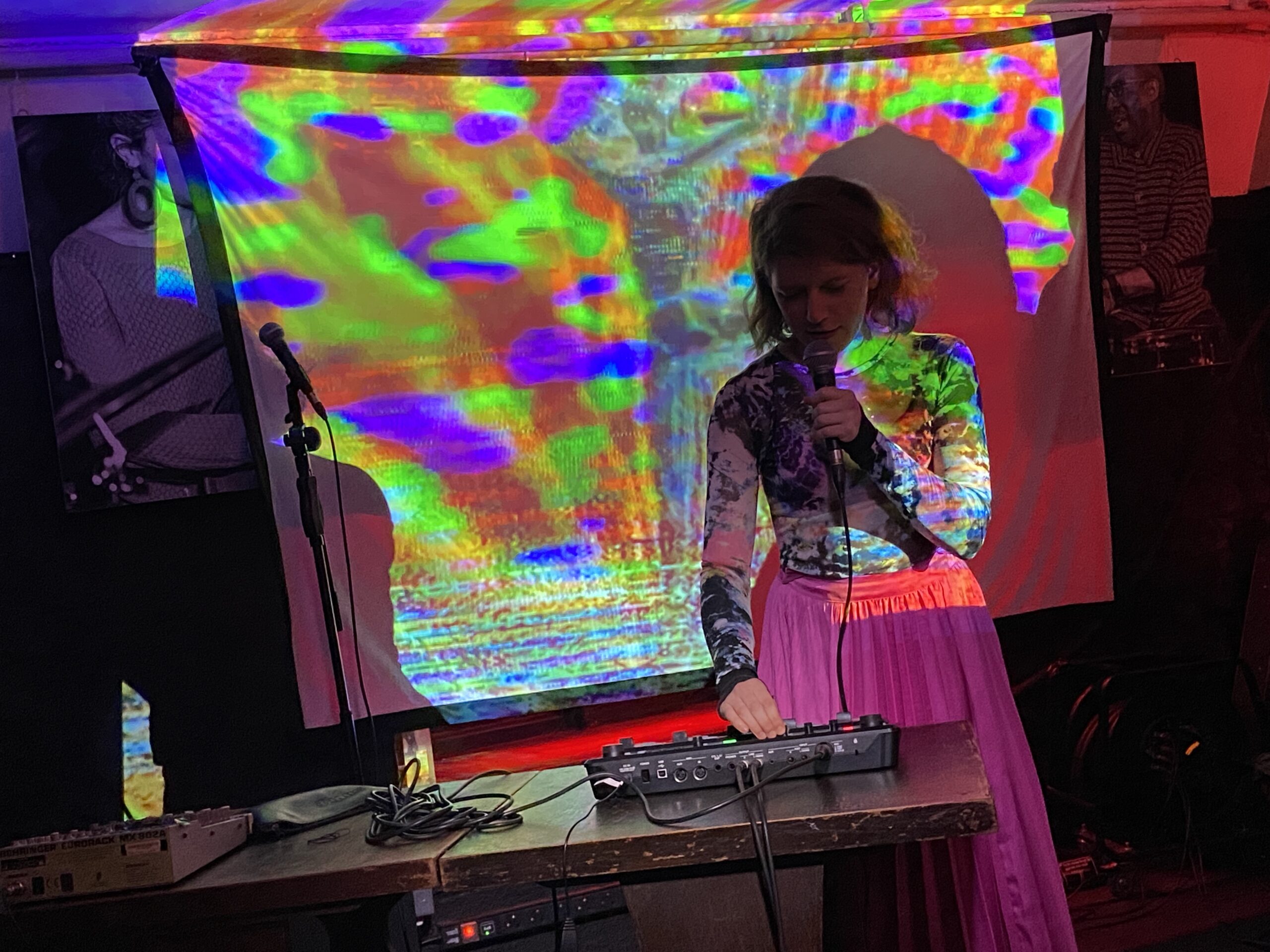 Geraldine Snell at Jazzlive at the Crypt

Bloom’s Taxonomy, Jazzlive at The Crypt, St Giles Church, Camberwell, 4 December – Someone else who in the last few months it was lovely to finally see live in-person after only having seen them do their music for the first time over Zoom/Twitch etc during lockdown. Always brilliant melodic techno* stuff. You should check it out. [*It is possibly not actually melodic techno. That’s just how I describe anything that is electronic with beats but also a tune]

DPM, Jazzlive at The Crypt, St Giles Church, Camberwell, 4 December – I’ve seen Diego do this before, in Cambridge back in August, he’s one half of the duo but the other guy he co-writes with is in New York. Dramatic electronic pop.

Obscenity State, Jazzlive at The Crypt, St Giles Church, Camberwell, 4 December – It was great to see Nilly live again but I found it incredibly intimidating because I was on next so between her stuff being brilliant and my stage fright it wasn’t 15 minutes when I could really pay attention to her set or listen to it without going “Oh no, I have to go on after this.” 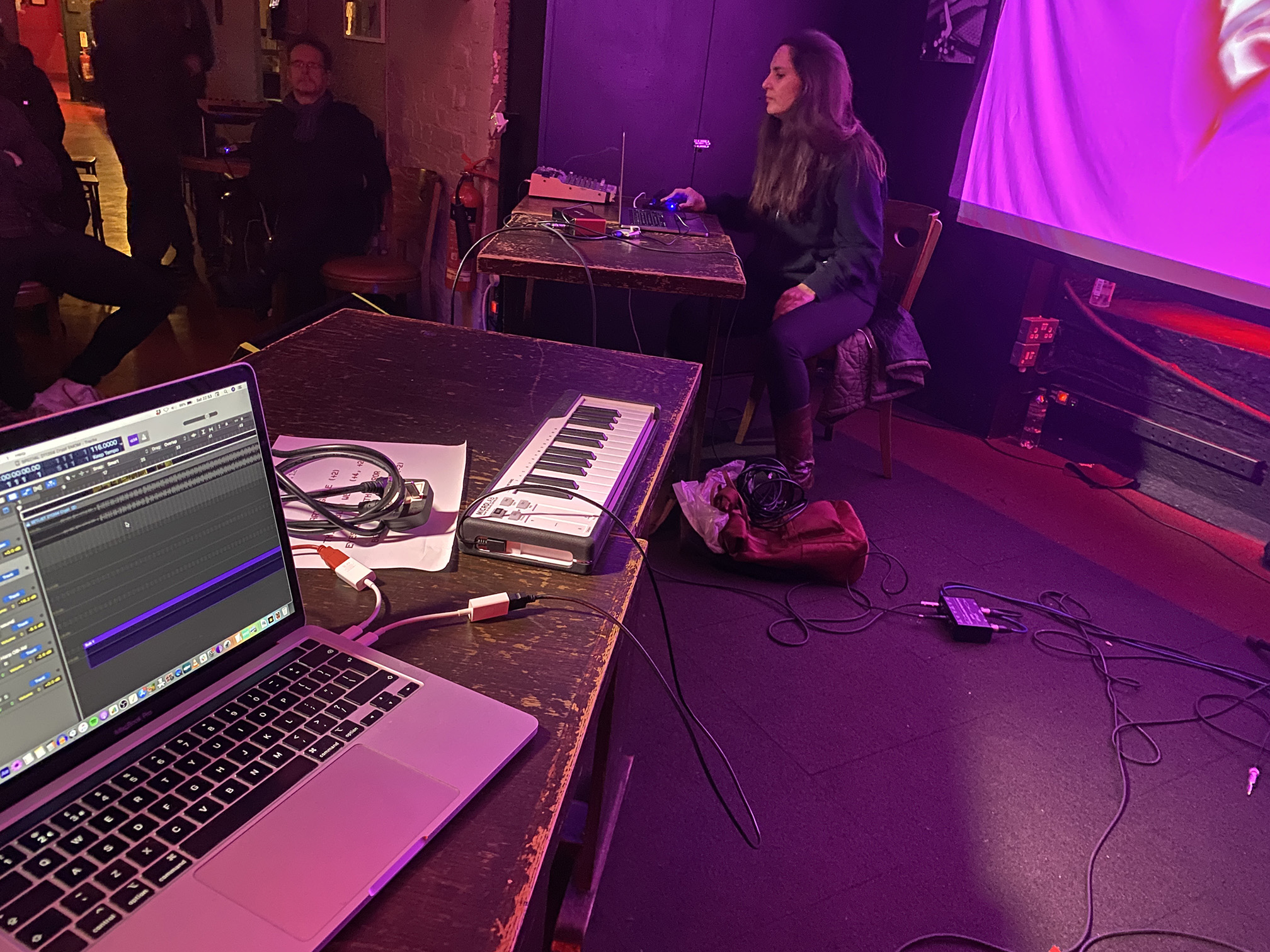 Obscenity State at Jazzlive at the Crypt while I am setting up m-orchestra in the foreground.

m-orchestra, Jazzlive at The Crypt, St Giles Church, Camberwell, 4 December – In 1987 or 1988 there was a gloomy indie record shop on Hoe Street, Walthamstow called Ugly Child, which was run by a guy called Nigel, and it was in the premises where Small Wonder used to be. Obviously it was my home-from-home and where I bought loads of interesting records with my pocket money, and also hung around chit-chatting in a way that would have presumably driven me nuts once I was on the other side of the counter working in record shops a couple of years later. “Oh no, that kid is here again!”. Anyway, one day I went in and I had been talking about my band on previous occasions obviously and Nigel said “Your band should do a cover version of this” and he was playing Bauhaus’ Bela Lugosi’s Dead. And I remember making some self-effacing joke like “Oh no, it’s got three notes. Far too complicated for us”. At this point obviously we mostly did Cure and Joy Division covers, this suggestion wasn’t entirely random from Nigel. Still, the point is that at this gig in a crypt in a church in Camberwell, 33 years later, I finally did a version of Bela Lugosi’s Dead. Thanks Ugly Child Nigel, wherever you are now.

Micko & The Mellotronics, The Night Owl, Finsbury Park, 9 December – My friend Heidi was making their debut on bass in this which is led by Micko Westmoreland and the trio play psychedelic powerpop and it was great fun. 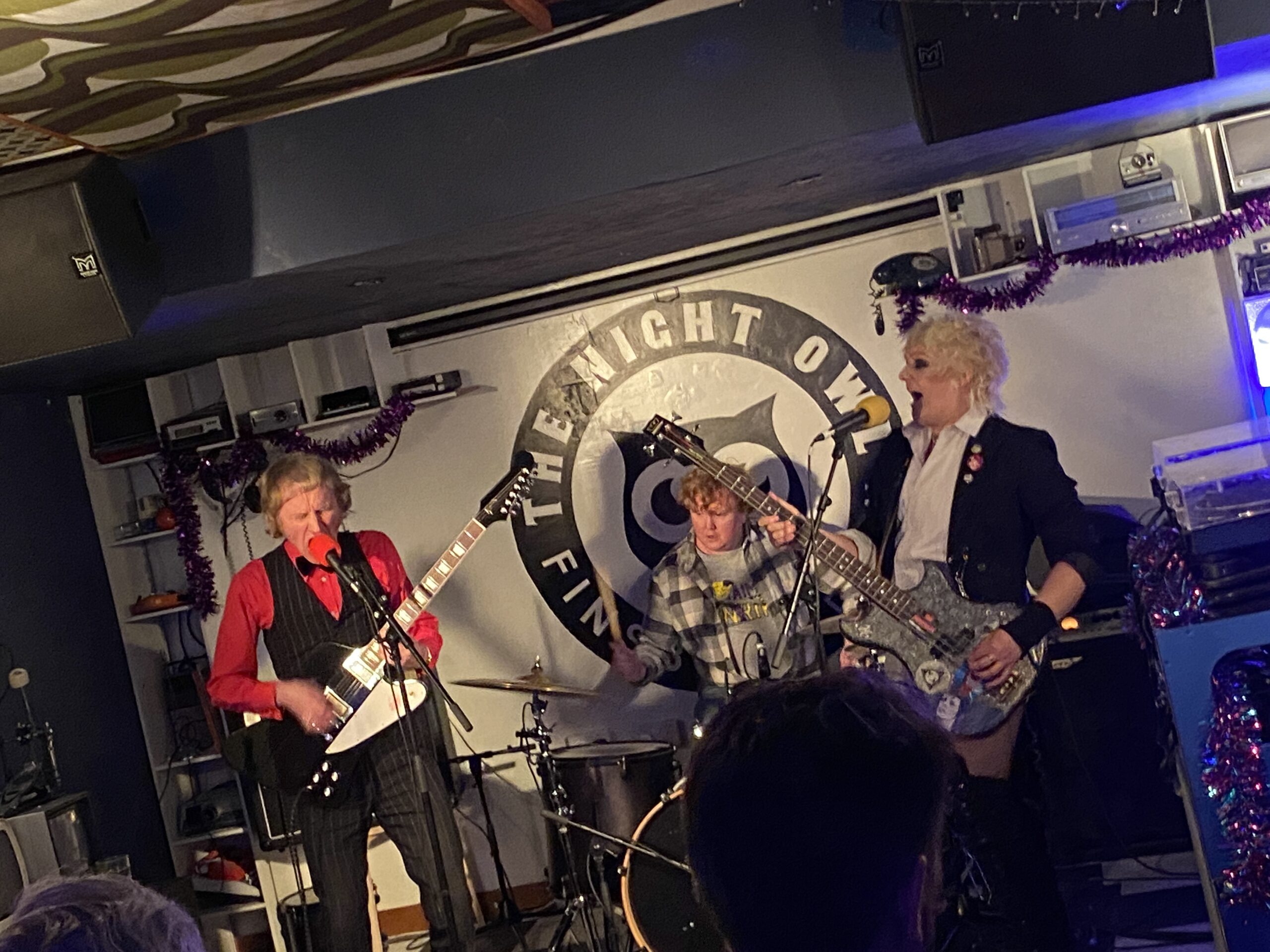 Micko & the Mellotronics at The Night Owl, Finsbury Park

The Charlatans, Brixton Academy, Brixton, 10 December – I’d seen the Charaltans loads back in the day, but I specifically bought a ticket for this as a thank you for the #TimsTwitterListeningParty phenomenon. Given it was about twenty years since I’d last bought a Charlatans album too, I did a bit of setlist research in advance and was pleased to find that all the singles I haven’t listened to in the past decade – Plastic Machinery and So Oh etc – were perfectly cromulent Charlatans songs. 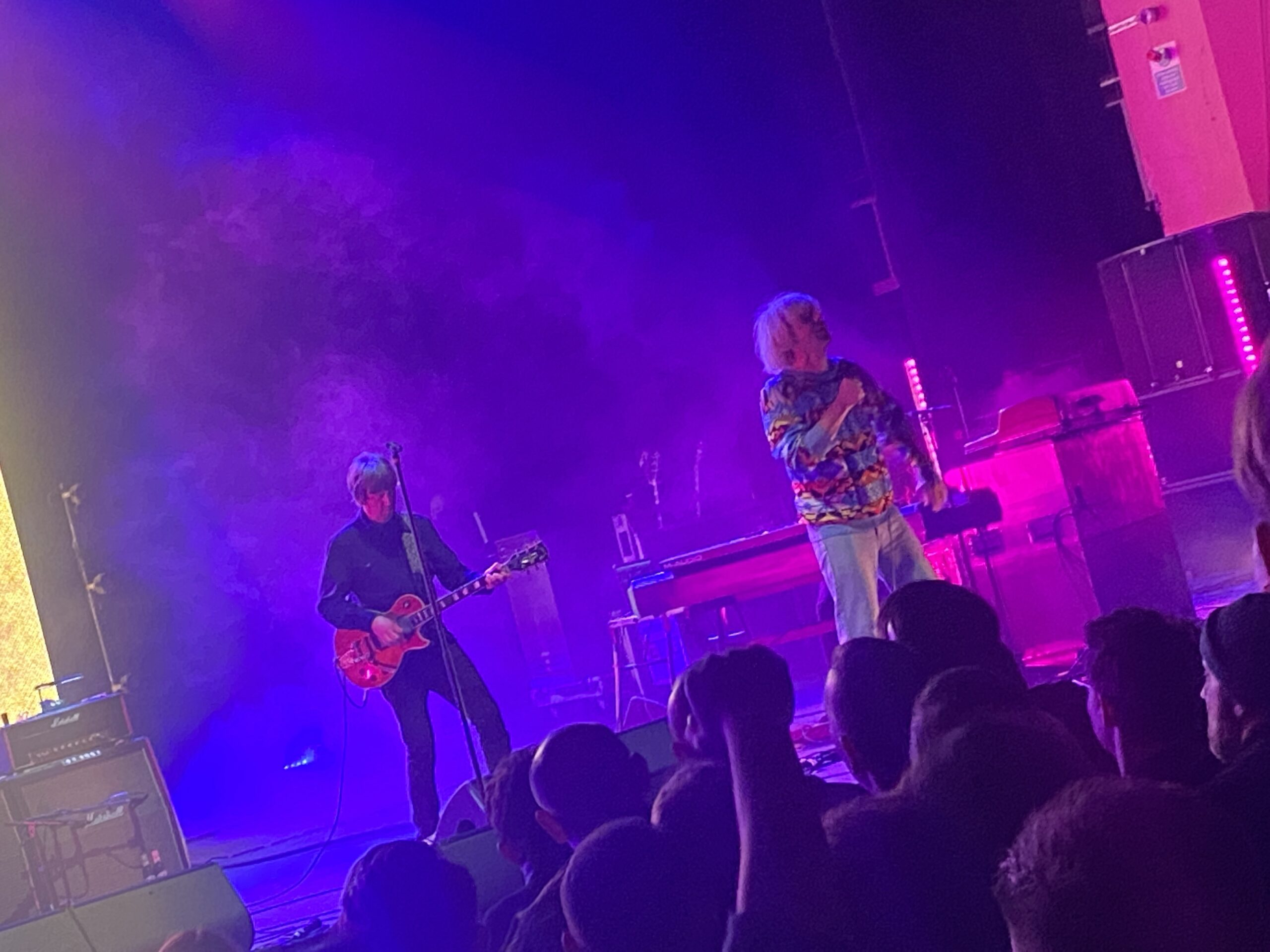 The Charlatans at Brixton Academy

Altered Images, SSE Arena, Wembley, 11 December – I don’t really know their stuff apart from the couple of big singles but Clare Grogan went at it in a sparkly dress and with great gusto. Infectious fun. 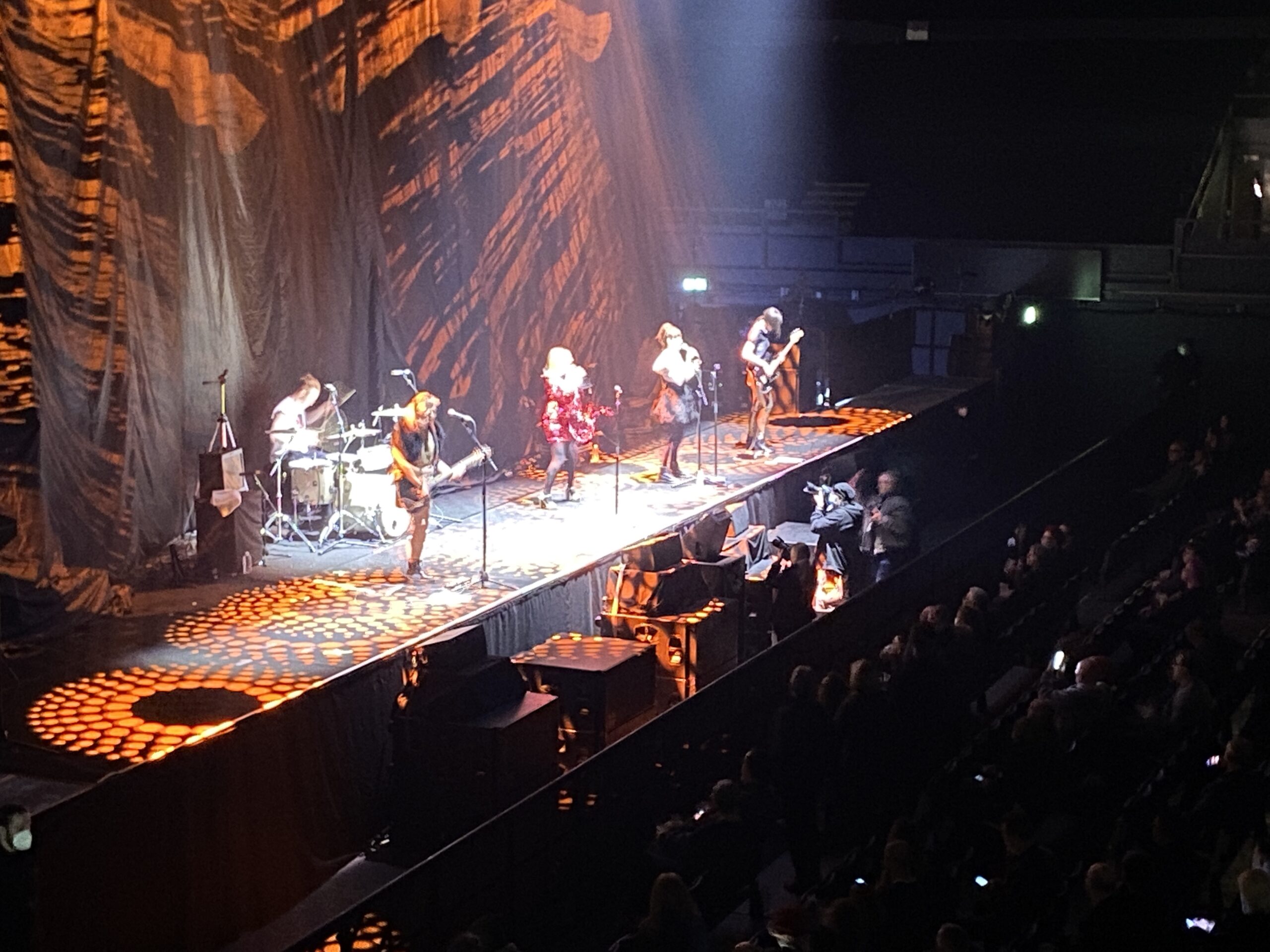 Clare Grogan and Altered Images at the SSE Wembley Arena

Tom Bailey, SSE Arena, Wembley, 11 December – Not ever seeing the Thompson Twins live is one of my musical regrets, and to say I used to be emotionally invested in the Into The Gap album would be an under-estimate. I had written and storyboarded a whole musical movie based on the album that I used to practice performing in my room. You had to make your own entertainment in those days. Anyway I found it very emotional to see him, although he also inexplicably did a cover version of Talking Heads’ Psycho Killer which literally nobody in the world has ever asked for. Tom, you’ve got the entire Thompson Twins back catalogue to pick from.

The Human League, SSE Arena, Wembley, 11 December – It is just banger after banger isn’t it? Including the ones like Tell Me When and Heart Like A Wheel which you’ve probably forgotten.

Halina Rice, Copeland Gallery, London, 17 December – It is the third time I’ve seen her in three months, but this was a surround sound version of her show in a gallery space. It really suited the music, and also the visuals which often feature an avatar of her playing in a gallery anyway. I don’t think I’ve ever really heard that many things in surround sound live – maybe Super Furry Animals once? – which was very impressive in the space. Top notch, and a lovely end to what turned out eventually to be a decent year for gigs after all. 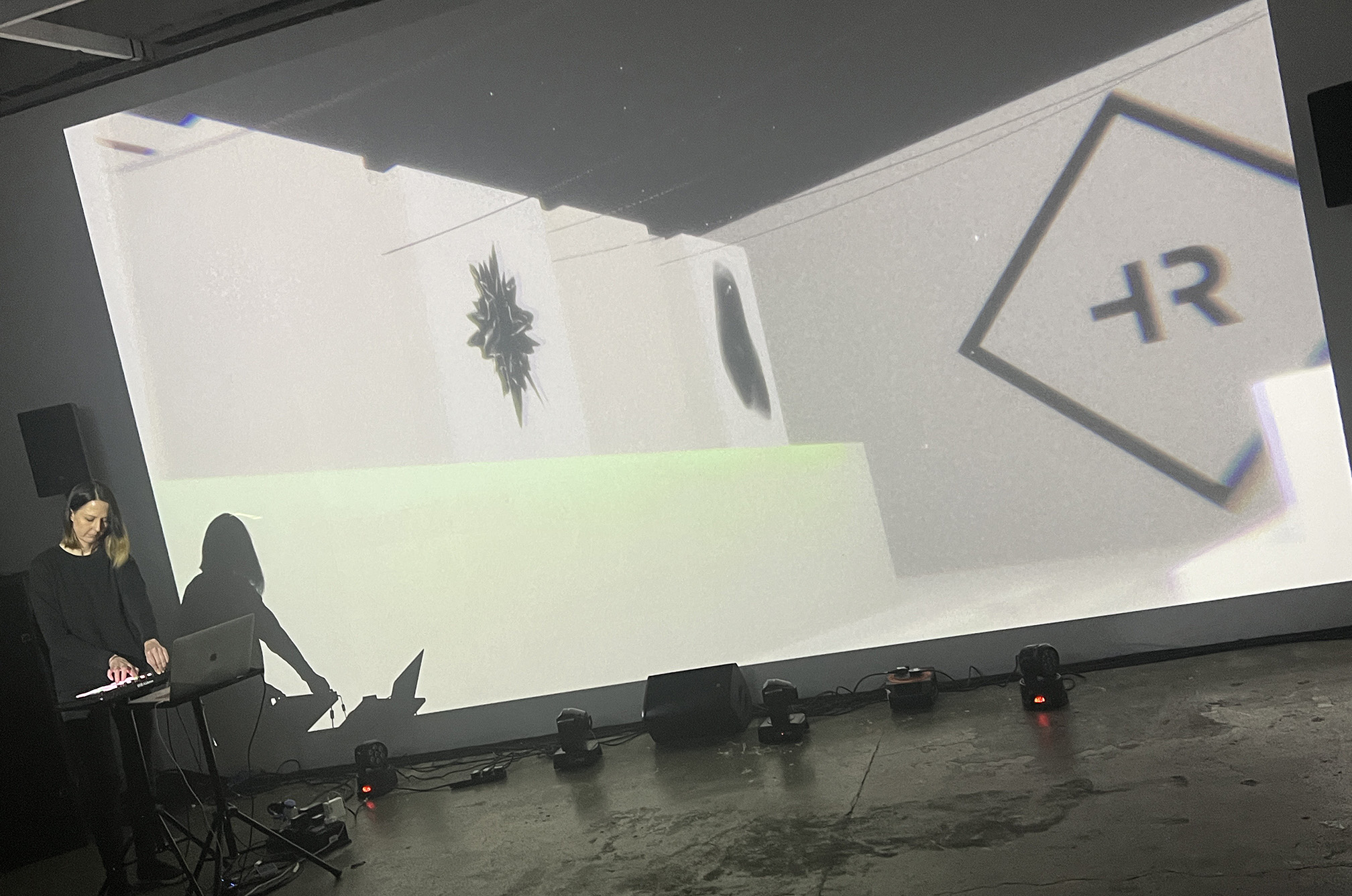 by Martin Belam, December 18, 2021
I do social and explaining stuff at the Guardian. As a journalist and designer I’ve spent nearly twenty years building digital products for the likes of the Guardian, BBC, Daily Mirror and Sony. I also make electronic music about the paranormal under the name m-orchestra. I’m @MartinBelam on Twitter, and martin.belam@theguardian.com on email. Sign up to get my blog posts sent to you via email.
← A one-line review of every #TimsTwitterListeningParty I joined September–November 2021
Five songs from 2021 that you might enjoy →