Unknown support act, Moth Club, Hackney, 2 November – I arrived late at this gig and had no idea who these were but I enjoyed it. Lots of low rumbling minor-key bass lines and repetition that put me in mind a little of Swans during their White Light from the Mouth of Infinity phase.

bdrmm, Moth Club, Hackney, 2 November – It is the second time I’ve seen them, perfectly cromulent shoegaze-y early-Ride type stuff, but I only stayed for about twenty-five minutes because it was VERY LOUD and made my old man’s ears hurt and was the first of four rescheduled gigs in six days and I was already VERY TIRED.

Jesus Jones, 100 Club, Soho, 4 November – I still think they are dreadfully under-rated, and produced a string of absolute bangers as singles off their first two albums, of which bizarrely the biggest hit – International Bright Young Thing – is probably the weakest. Mike Edwards doesn’t seem to age and now looks younger than me. 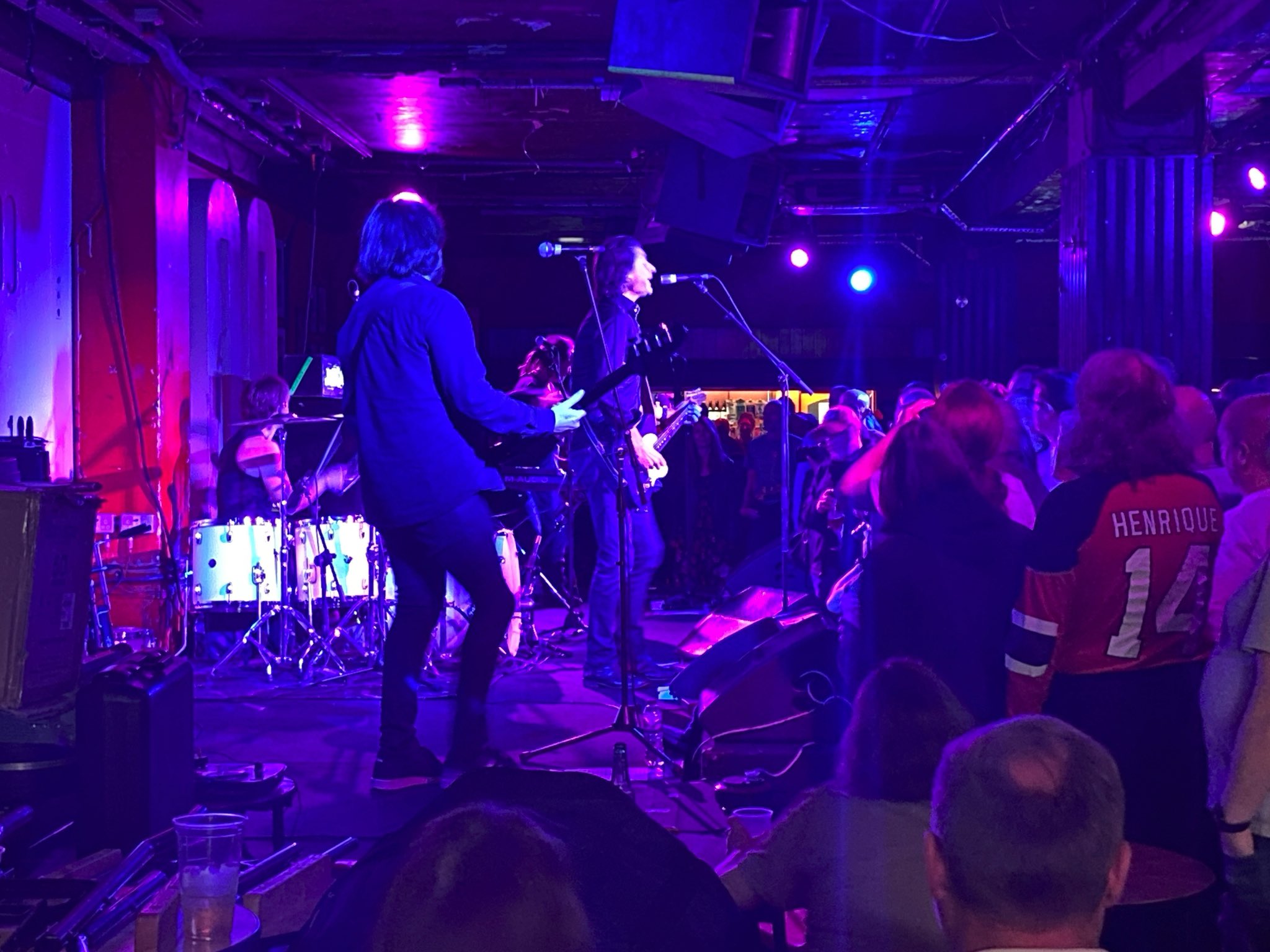 Jesus Jones at the 100 Club

Fujiya & Miyagi, The O2 Arena, 6 November – A near-empty O2 Arena is a thankless task as a support act, but I enjoyed their motorik drive, even if it was a bit lost in the space. Would love to see them somewhere smaller.

New Order, The O2 Arena, 6 November – New Order were the first band that I went to see in 1987 with a couple of mates and no parents, and my first band used to do Joy Division covers, and I just got totally overcome by this whole experience by the end. 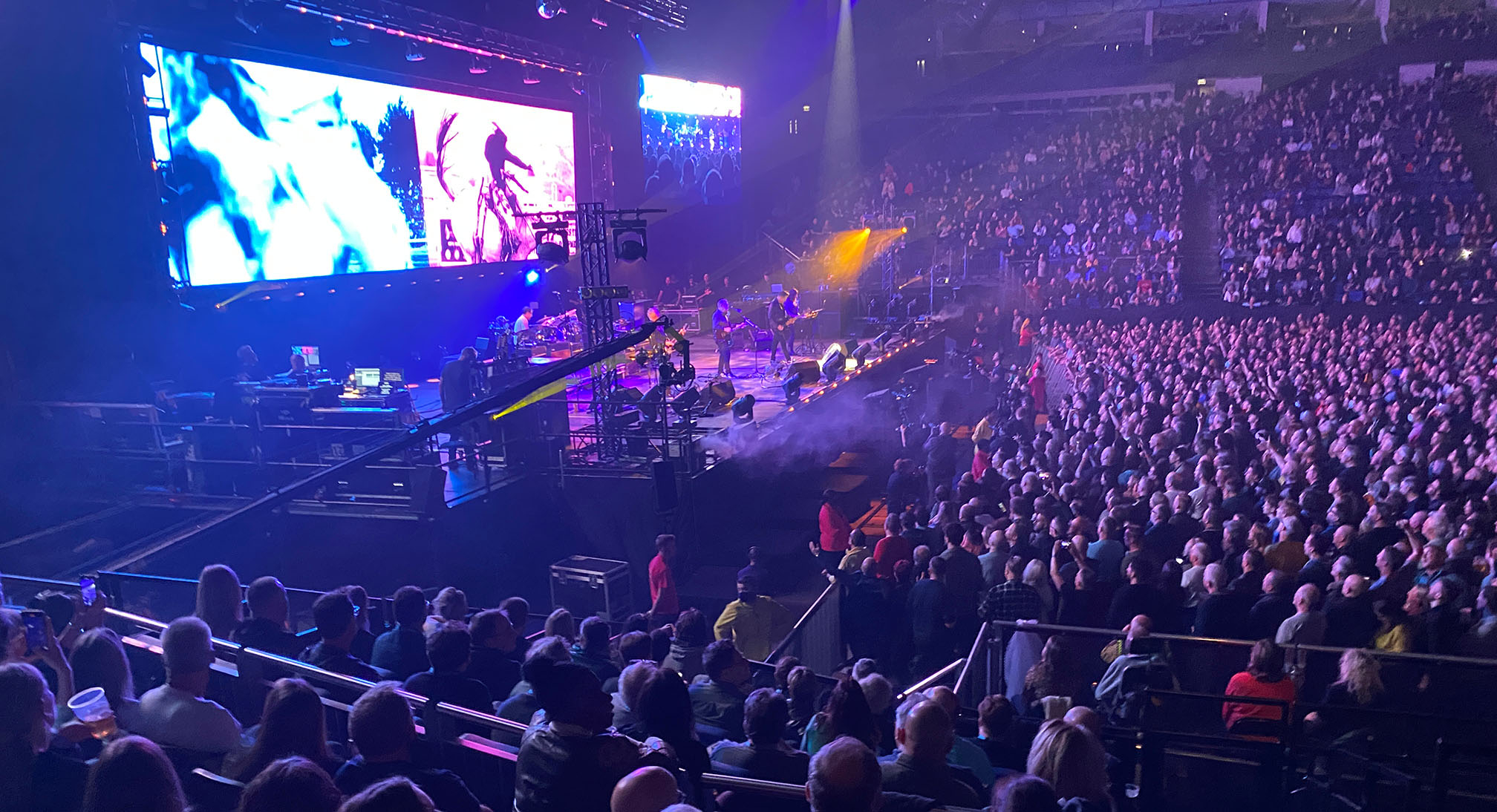 New Order at the O2 Arena

Nadine Shah, Alexandra Palace, London, 11 November – One of the most exciting artists I’ve discovered over the last few years, this is the sixth time I’ve seen her and she never disappoints – great songs delivered with real passion and energy and just a simply incredible voice. Nothing will dim her light.

Suede, Alexandra Palace, London, 11 November – That opening salvo of Suede singles was easily one of the most exciting things to happen when I was at Uni in the early 90s but tonight the focus was on third album Coming Up, where they had to prove they could survive the departure of Bernard Butler and in response crafted an album where every track could have been a single. The years seem to have been distributed unevenly among the band, Mat Osman looks like he could fit in playing bass for the Stones, Brett doesn’t seem to have gained an ounce of weight or lost a micron of energy. Epic night.

Scritti Polliti, Eventim Apollo, Hammersmith, 13 November – A truncated version of the set I saw last month at their own Shepherds Bush gig, it is nice that the complex arrangements of Hypnotise and Perfect Way have been decoded by Rhodri and now regularly appear in the setlist.

OMD, Eventim Apollo, Hammersmith, 13 November – No comedy cock-up this time and I got to see OMD who are always way better live and more energetic than you would think and who have more hits than you realise. Must say though, along with at New Order, I feel like there’s an increasing cohort of pissed up fiftysomething men going to 80s band gigs and treating it like a football awayday where the boozing and spoiling for a fight is more important than the actual music. Encore at this ruined by some toxic masculinity prick cruising up and down the aisles moaning at people for not dancing enough. The cunt had been sat down all the way though up to that point. Fucking arsehole.

Soft Cell, Eventim Apollo, Hammersmith, 15 November – I approached this with some trepidation as they were planning to play new stuff from an as-yet-unreleased album so I checked the setlist in advance so I could do my revision on the new singles and songs from their 2003 comeback and that made that first half very enjoyable, then they played Non-Stop Erotic Cabaret in order in full which was superb. With the slightly grim reflection that the characters in Youth lamenting their lost youth are still about twenty-five years younger than I am now, and where I used to listen to Frustration and think “God imagine being that sad boring middle-aged bastard” it is now basically autobiographical. A mortgage of my own indeed.

Arch Femmesis, The Waiting Room, Stoke Newington, 17 November – I enjoyed this – they did a couple of songs where the singer played bass which had a bit of an early 4AD vibe to them. The rest of it was more heavily electronic – the last couple of songs sonically and rhythmically sounded like the kind of thing Nitzer Ebb might have put on Belief or Showtime, but with a really powerful woman singing. 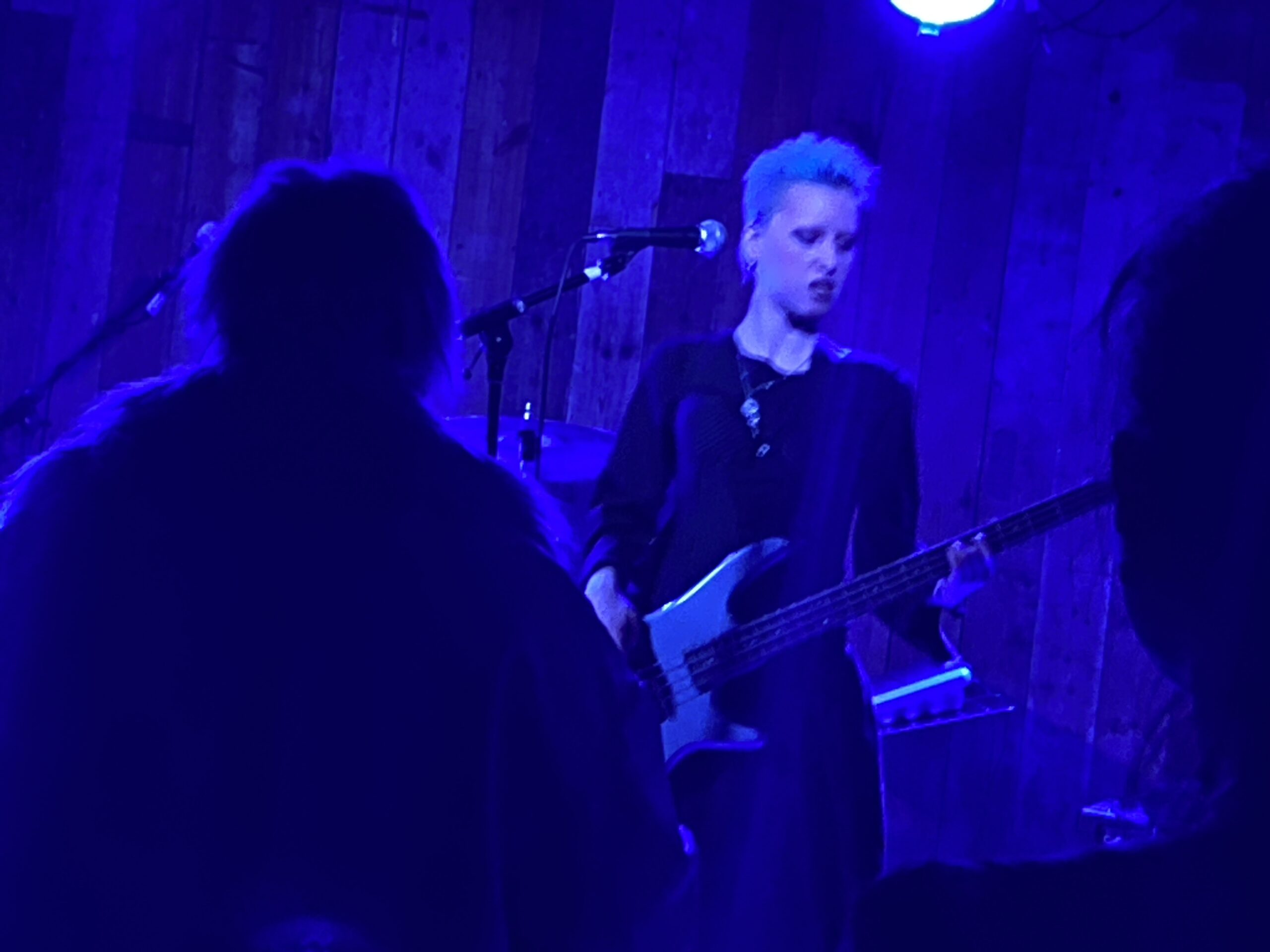 Scrounge, The Waiting Room, Stoke Newington, 17 November – This was great. Like Arch Femmesis it was just the two of them on stage. The drummer did a bit of backing vox and there was a singer playing the guitar. For me it had elements melodically of very early R.E.M. and Slint, but with the aggression and urgency of Pixies and Big Black. They finished with Badoom, which sounds like it should have been a massive 6Music radio play hit. 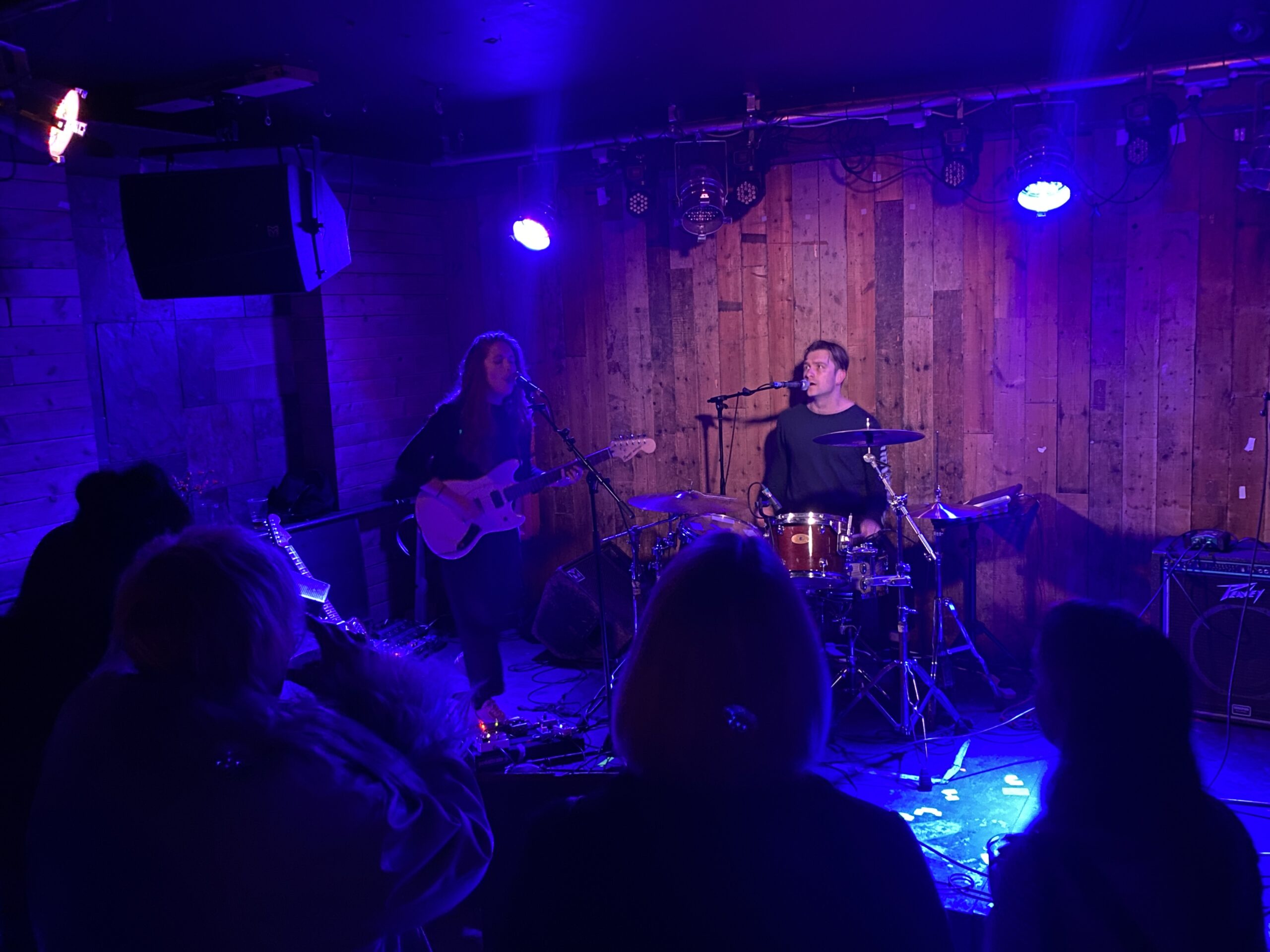 Libra Libra, The Waiting Room, Stoke Newington, 17 November – I saw them supporting Psychic TV back in 201nnn and bought the ticket for this off the back of that, but only saw a bit of them on this night because of having an early shift etc etc blah blah. They are very playful and fun and I overheard someone say “She’s got a set of pipes on her” because when Beth Cannon goes for it she sounds epic. I also want to give them a shout out because they were down the front cheering on the support acts which was lovely to see. I thought I would be the oldest, straightest, cishetist guy there but 1) I take that as a sign of me still being joyfully open-minded about music at my age and 2) there were still a couple of guys who at least looked older than me anyway.

Mistakeless, Crux AV, New River Studios, Hackney, 20 November – Very minimalist either treated piano sounds or drones, with also a weird cut-up remix thrown in that sounded like your CD player getting stuck used to in the 1990s 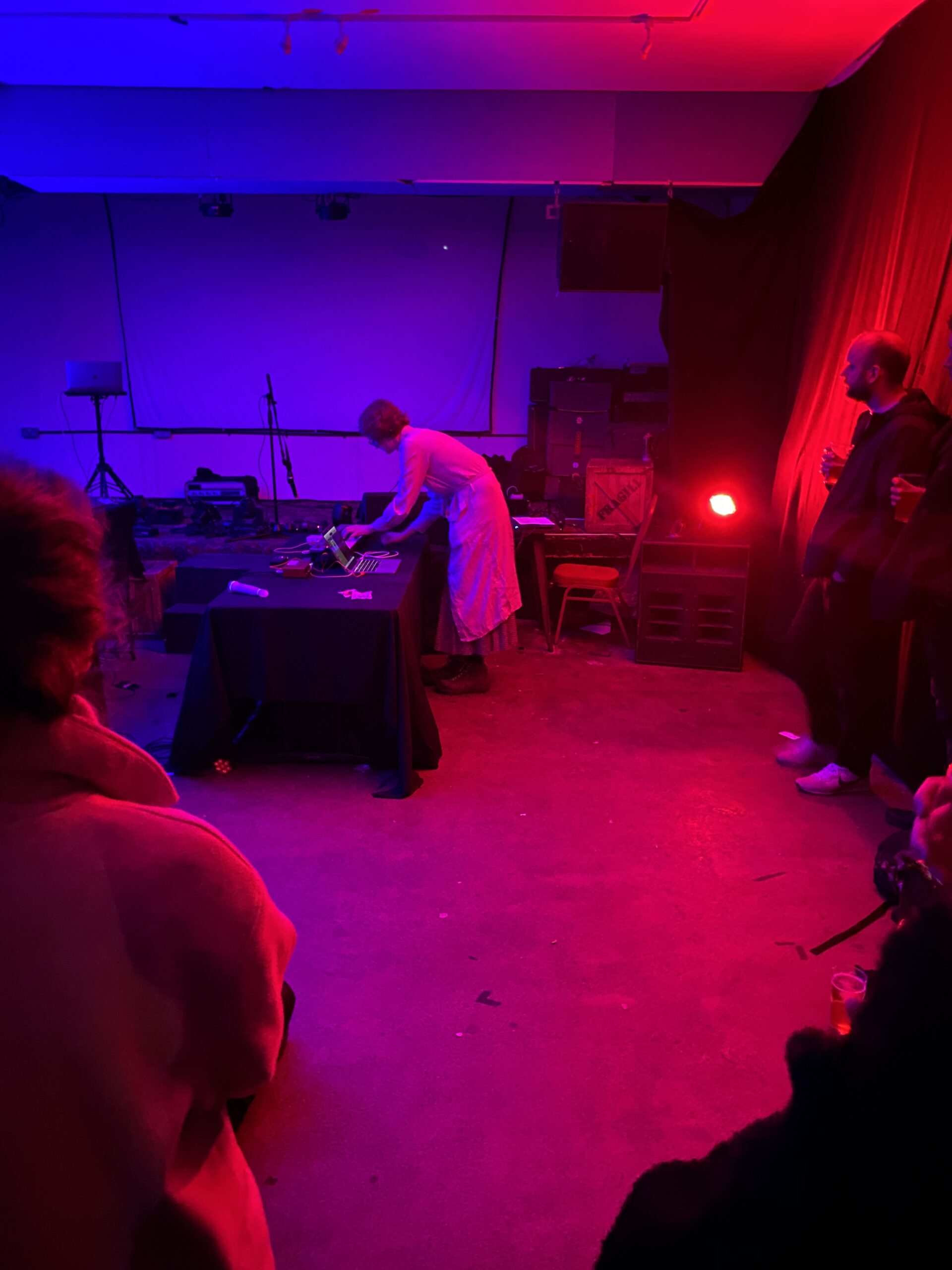 Same Sky, Crux AV, New River Studios, Hackney, 20 November – Lots of hardware in this performance which seemed to be one long improvised work, and the hardware included an old Walkman and some cassettes to provide ambient texture and the odd analogue rewind sound. The piece really built up momentum, and it was a great set-up, with Natasha Giordano and Filip Sijanec facing each other across the equipment. 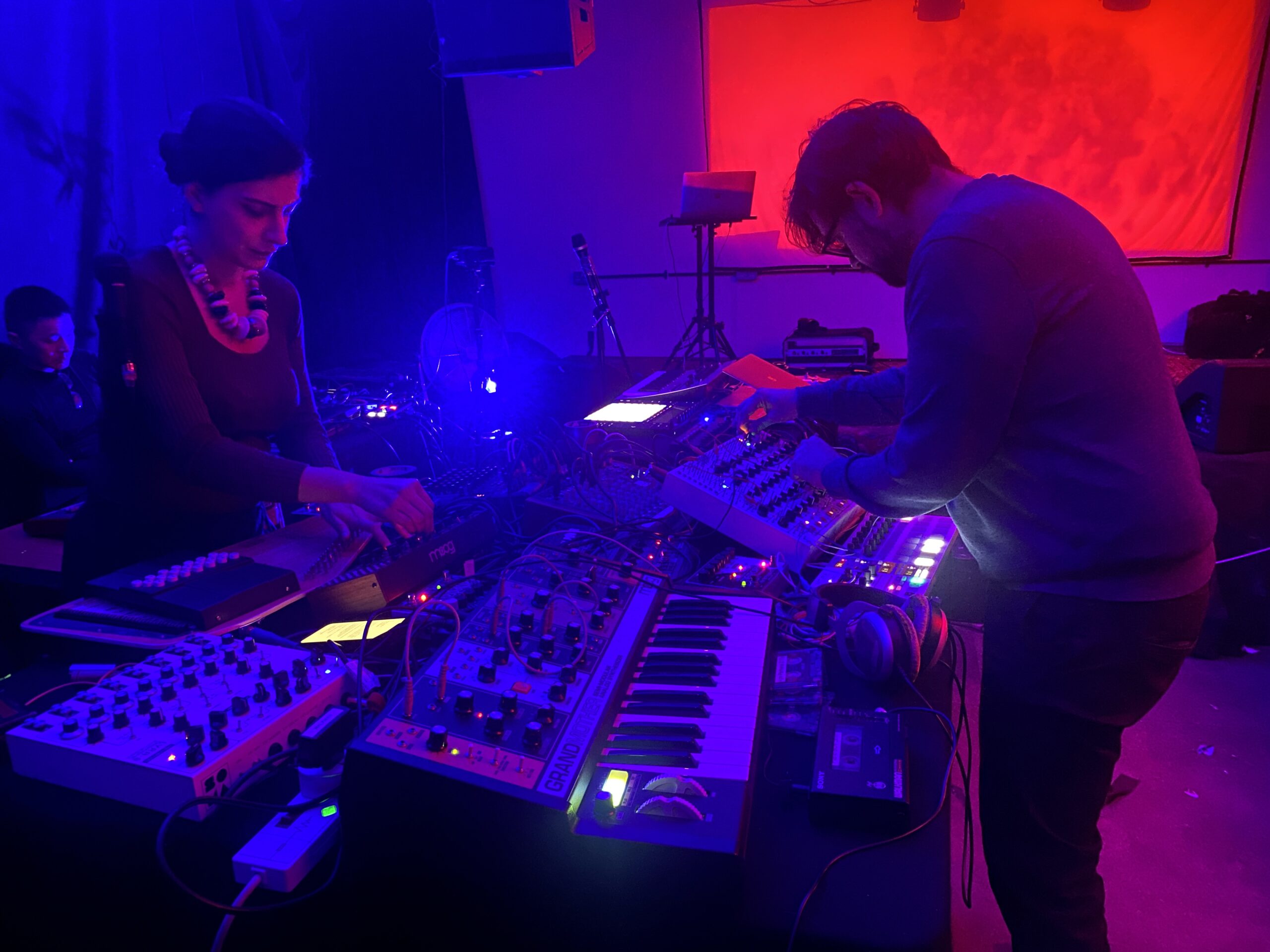 Obscenity State, Crux AV, New River Studios, Hackney, 20 November – Really glad to get to see Niloufar Nilly Brook live at last, and it didn’t disappoint, great techno beats, a bit of vocals, a hint of song structure, and really good visual show. It went down well in the room. 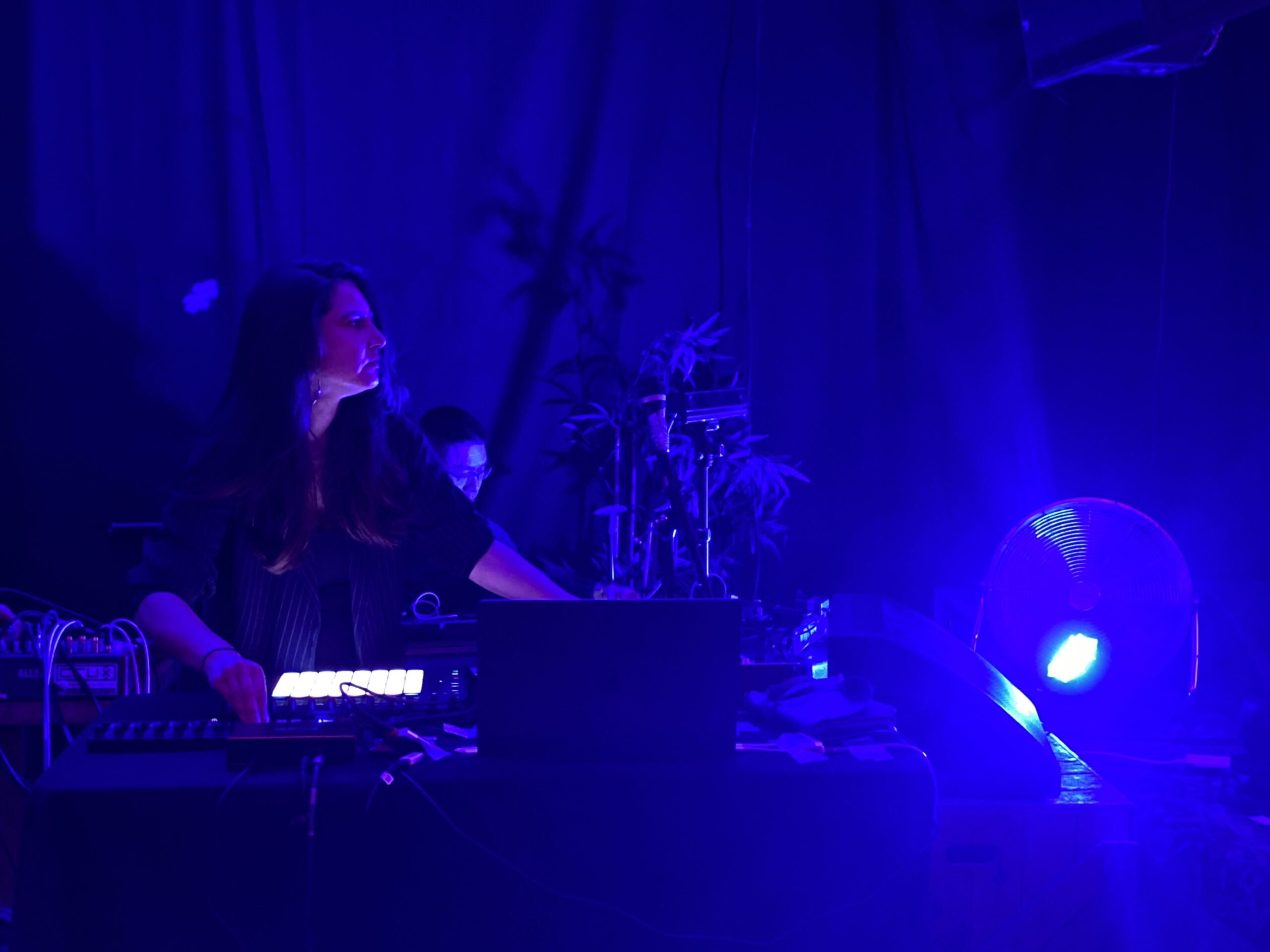 LuxuL, Crux AV, New River Studios, Hackney, 20 November – I went to queue up for a drink in the other room and it took ages and I missed this whole performance which was very frustrating as it was billed as “Viola. Voice. Violence.” which sounds very much like my bag.

Halina Rice, Crux AV, New River Studios, Hackney, 20 November – Good to get a second chance to see her playing her melodic techno interspersed with more abrasive bits. I got to chat to her and told her that my eight year old had found one of her videos which I’d played at home really creepy, which turned out not to be the endearing anecdote I had hoped. 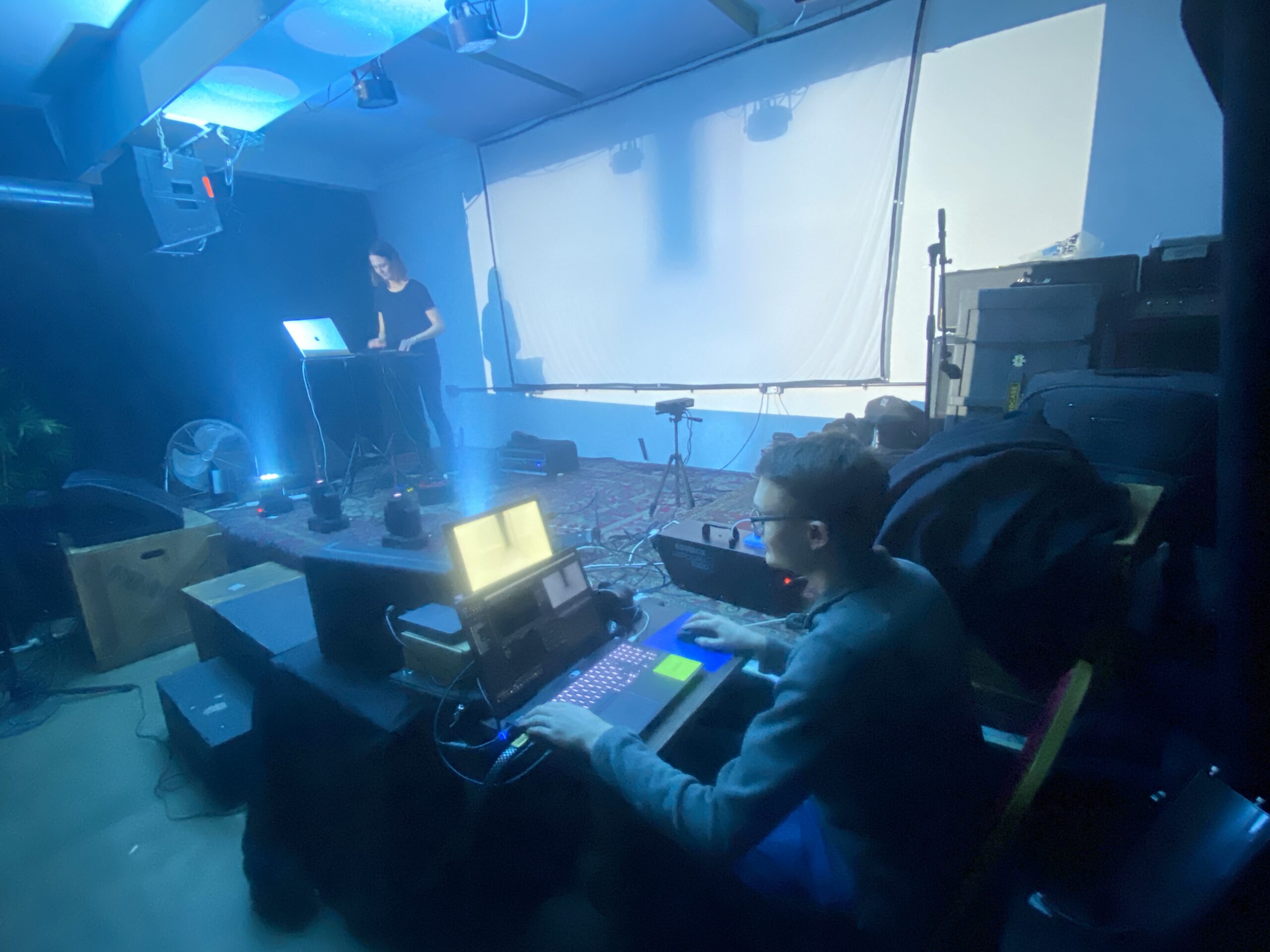 Seamus Heath/The Mouse, Eclectic Shock, Trades Hall, Walthamstow, 21 November – Eclectic Shock nights often start with an experimental electronic act and The Mouse mostly sounded like drum’n’bass that had been remixed by Boyd Rice and then mastered on sandpaper for that truly abrasive texture. Loved it. 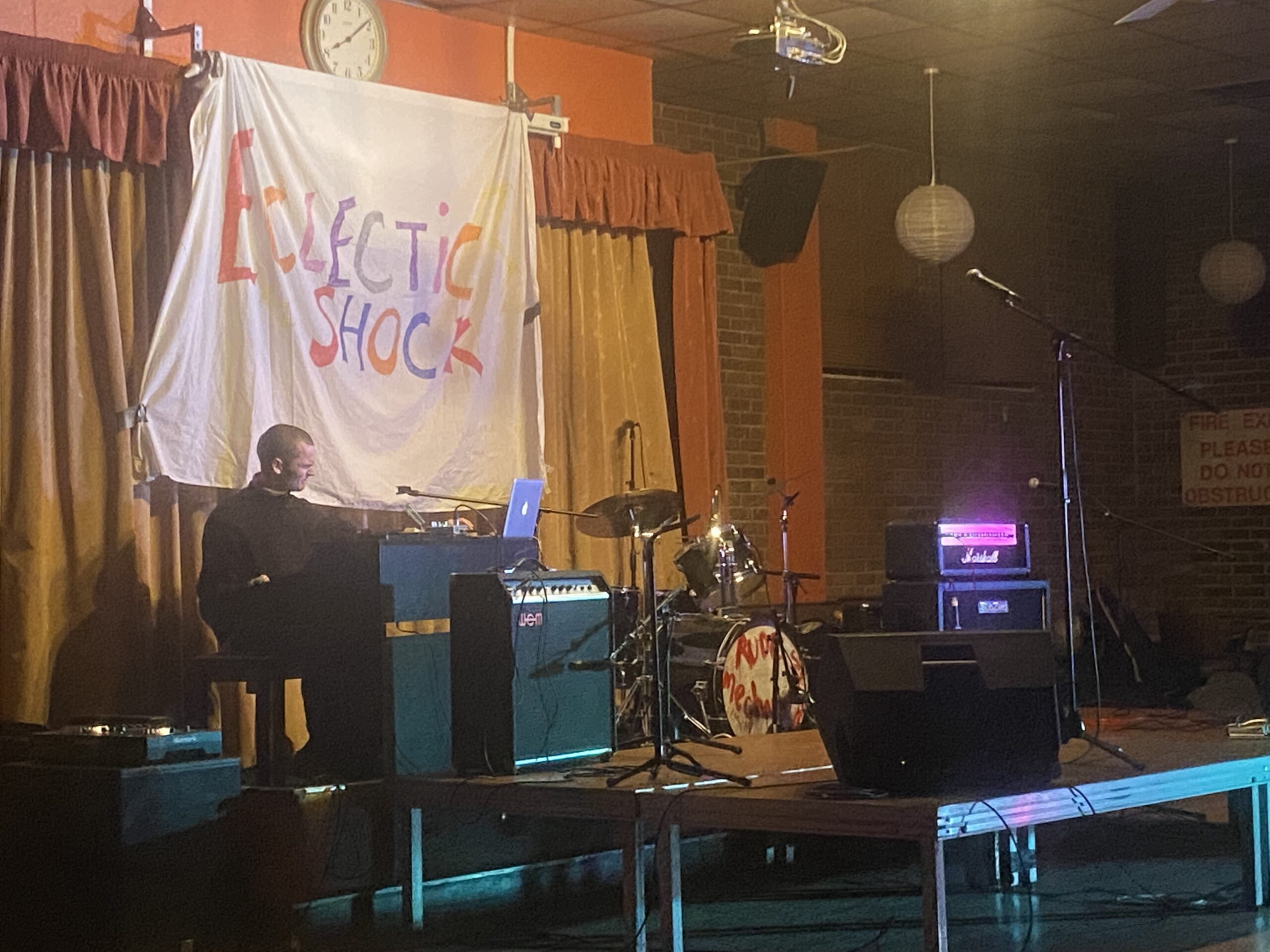 Simon and the Spears, Eclectic Shock, Trades Hall, Walthamstow, 21 November – Simon and the Spears are the house band of this evening, they were playing some new songs as well as things from their last album. Energetic indie power-pop.

TØNE, Eclectic Shock, Trades Hall, Walthamstow, 21 November – He said he usually has a band with him but at the last minute had to swap to using backing tracks and a DJ. Very mellow sort of retro Madchester vibe to elements of the music, with the lyrics mostly sounding like songs about messed up relationships. 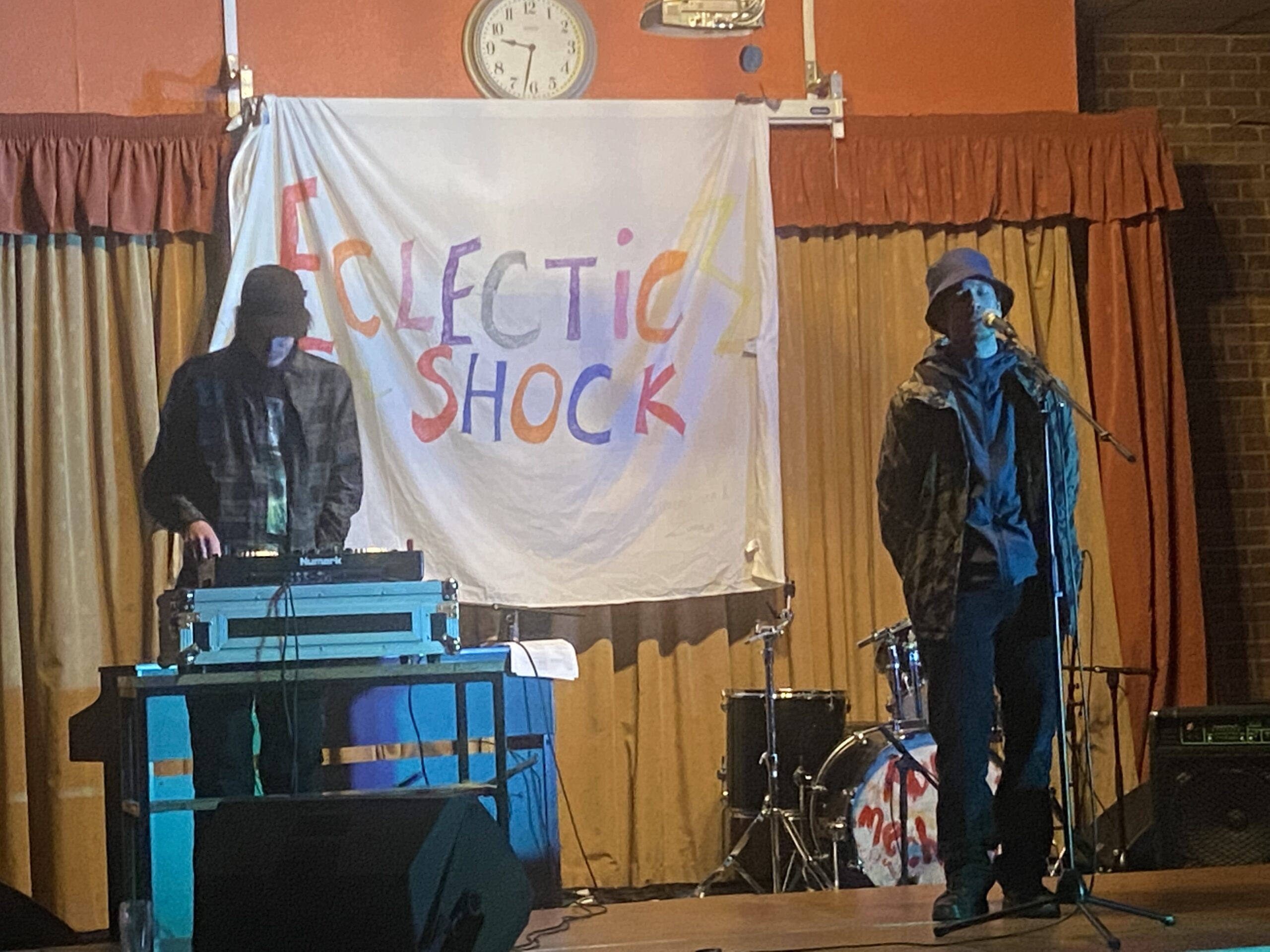 Anorak Patch, Eclectic Shock, Trades Hall, Walthamstow, 21 November – I feel like they are going to be huge, and I was lucky to see them at this point in time in this venue. Sort of prog indie-metal like a dash of Black Midi mixed with some harder stuff, they all look about aged 12 to me. Really good. 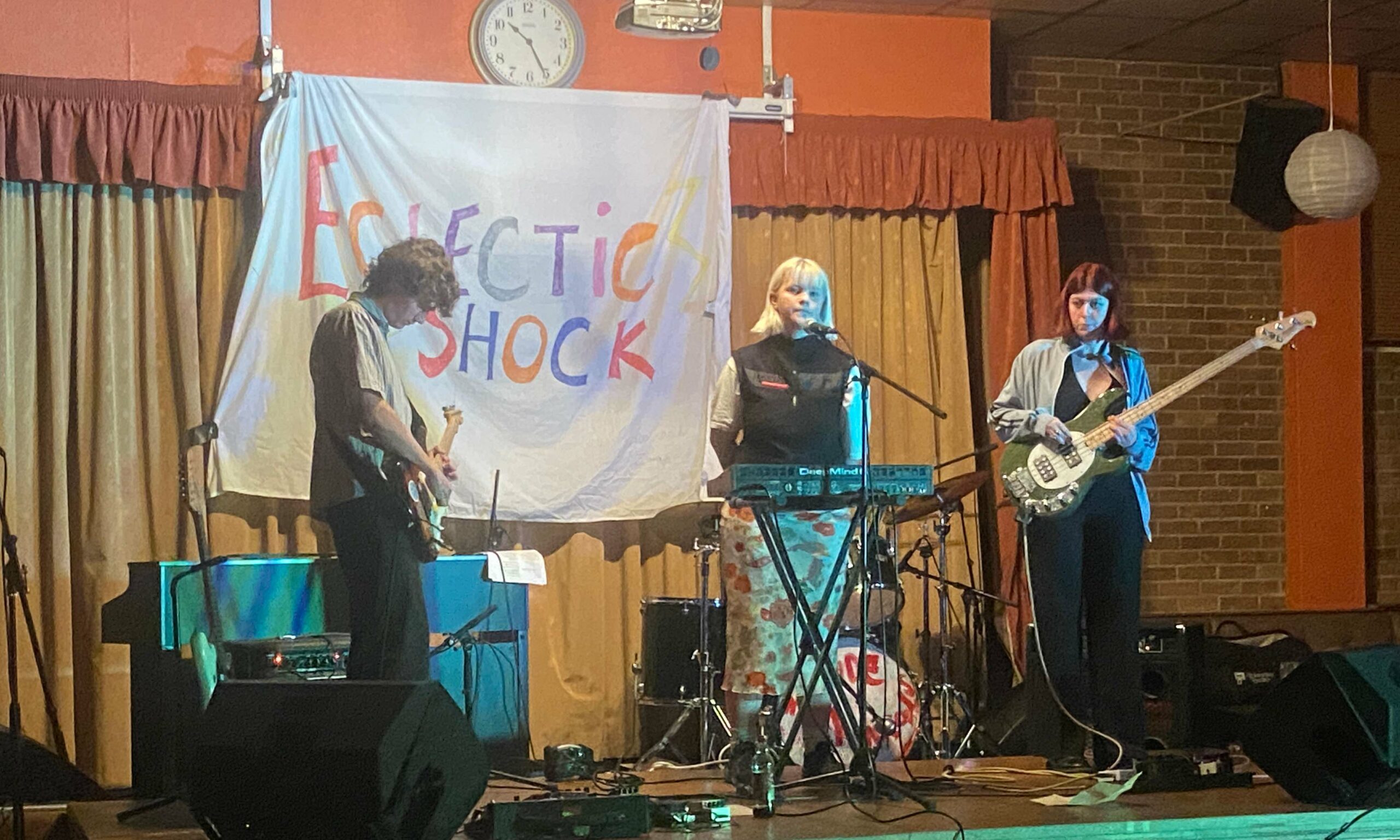 Whispering Sons, Oslo, Hackney not Norway, 24 November – One of my favourite bands of the last few years, they play intense and dark post-punk music that you easily imagine having been signed to 4AD or Mute back in 1983/84. Frontwoman Fenne has a disturbing Ian Curtis-like intensity to her, the lyrics are so bleak, I recommend if you ever get an opportunity to see them that you take it. 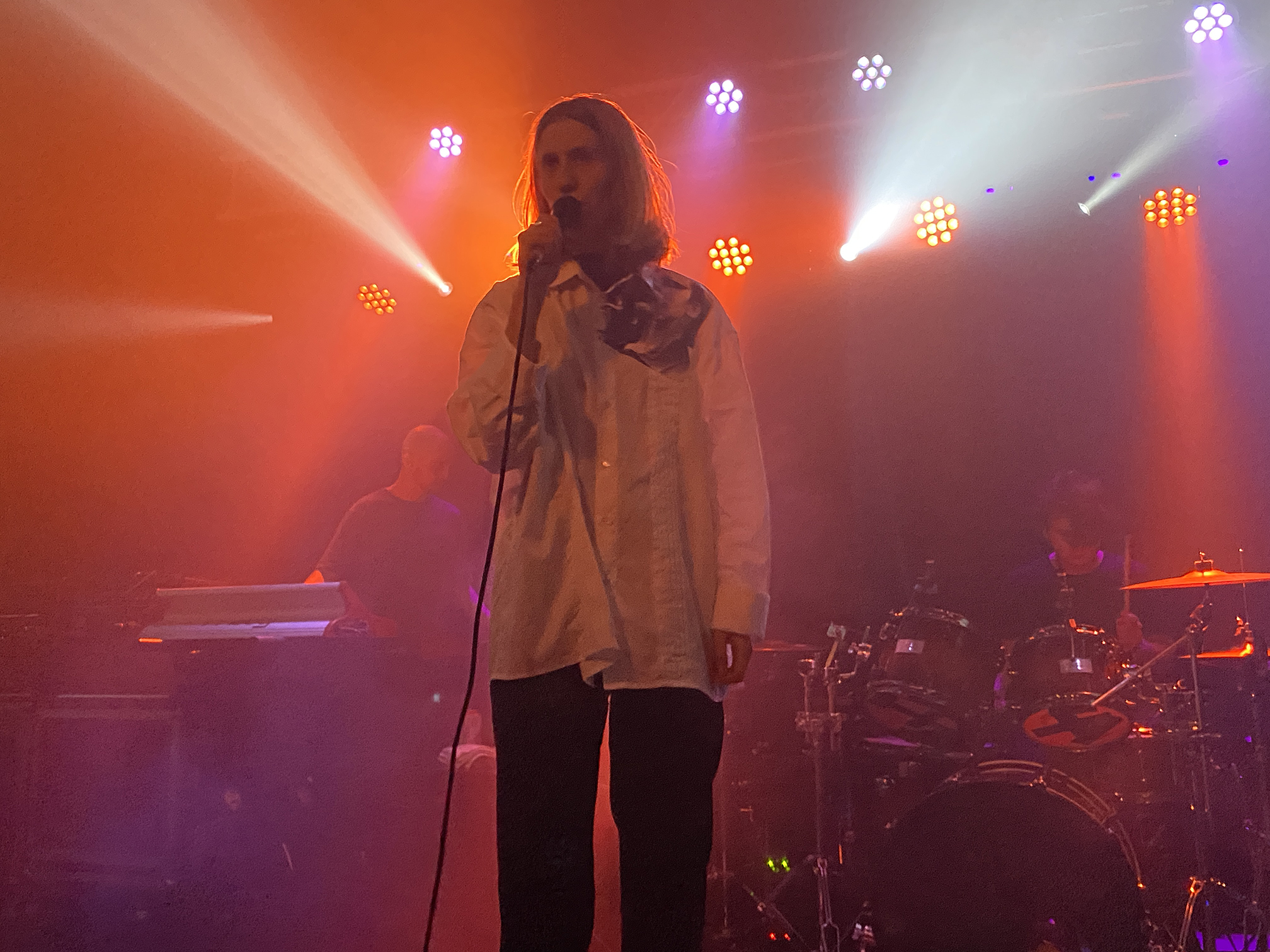 Kevin Cummins and Stephen Morris, Walthamstow Trades Hall, 25 November – This was another excellent evening from Mark Hart’s Walthamstow Rock’n’Roll Book Club. I was (just a little bit) too young to see Joy Division when they played Walthamstow but it was wonderful to see Stephen here (and with New Order’s Gillian in the audience too) and him and iconic photographer Kevin Cummins had real chemistry together talking about the days in the late 1970s and early 80s when he was photographing first Warsaw and then Joy Division. Their music has meant so much to me over the years, but it is always just refreshing to hear Stephen talking so openly about how they were just lads fucking about and making music, and not the austere public image that was projected, in no small part, by Kevin’s brilliant photographs of them. I think my favourite part was when Stephen was explaining how it was difficult in his head to look at those images of them on that snowy bridge and take in all the imagery and legendary impact it had with his own personal memories of them just all being fucking cold and wondering what the fuck Kevin was doing trying to photograph them from so far away. A wonderful night. 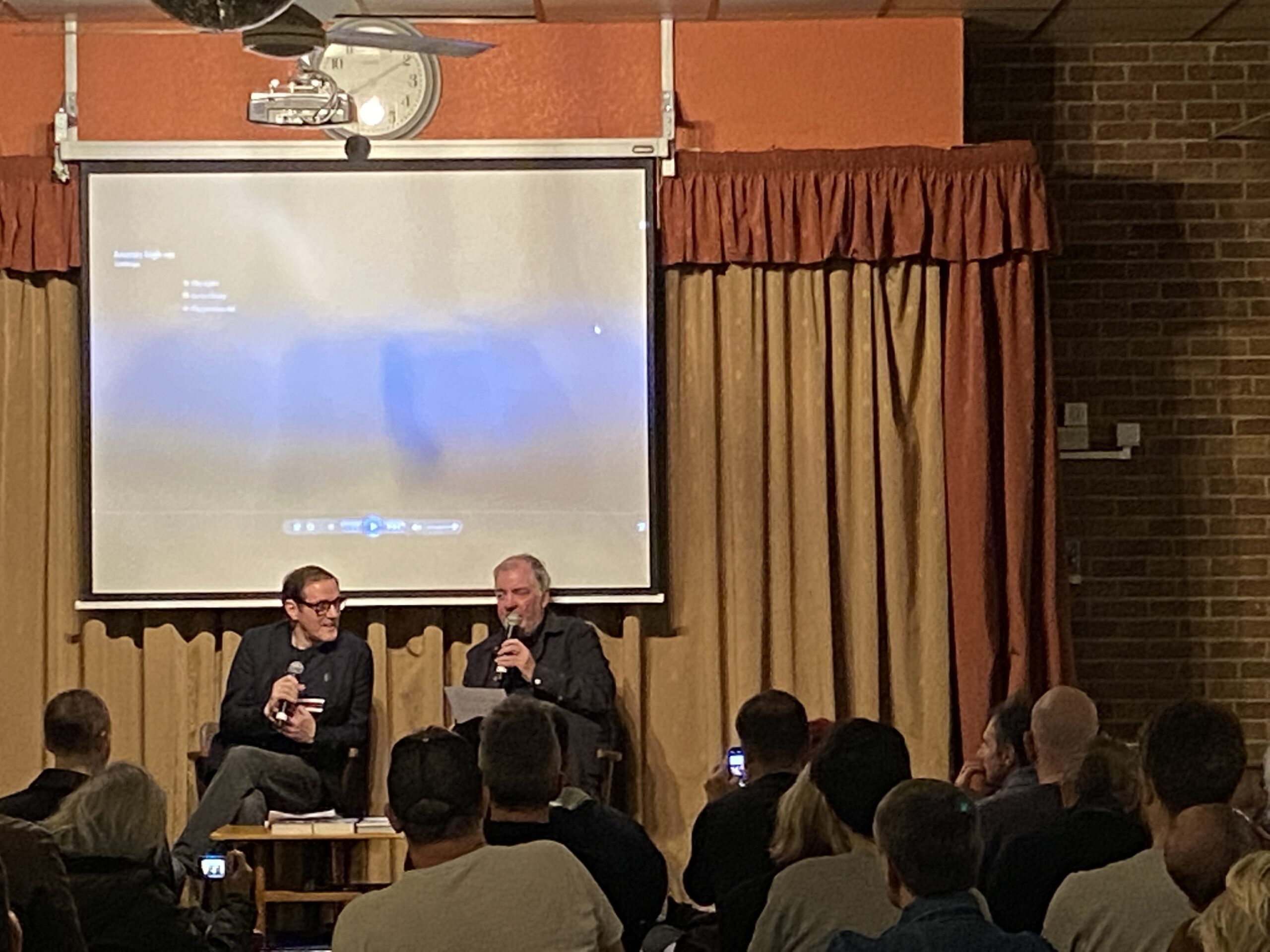 by Martin Belam, November 26, 2021
I do social and explaining stuff at the Guardian. As a journalist and designer I’ve spent nearly twenty years building digital products for the likes of the Guardian, BBC, Daily Mirror and Sony. I also make electronic music about the paranormal under the name m-orchestra. I’m @MartinBelam on Twitter, and martin.belam@theguardian.com on email. Sign up to get my blog posts sent to you via email.
← Friday Reading S12E07
Homebrew Electronica album raising money for Mind and Help Musicians →