Review: Sparks – What The Hell Is It This Time

I went to the BFI on Tuesday to see the world premiere of the Sparks’ concert movie What The Hell Is It This Time directed by Edgar Wright, with an introduction by the director himself. It seemed a little ill-publicised, I guess so as not to distract from the theatrical release of The Sparks Brothers documentary. 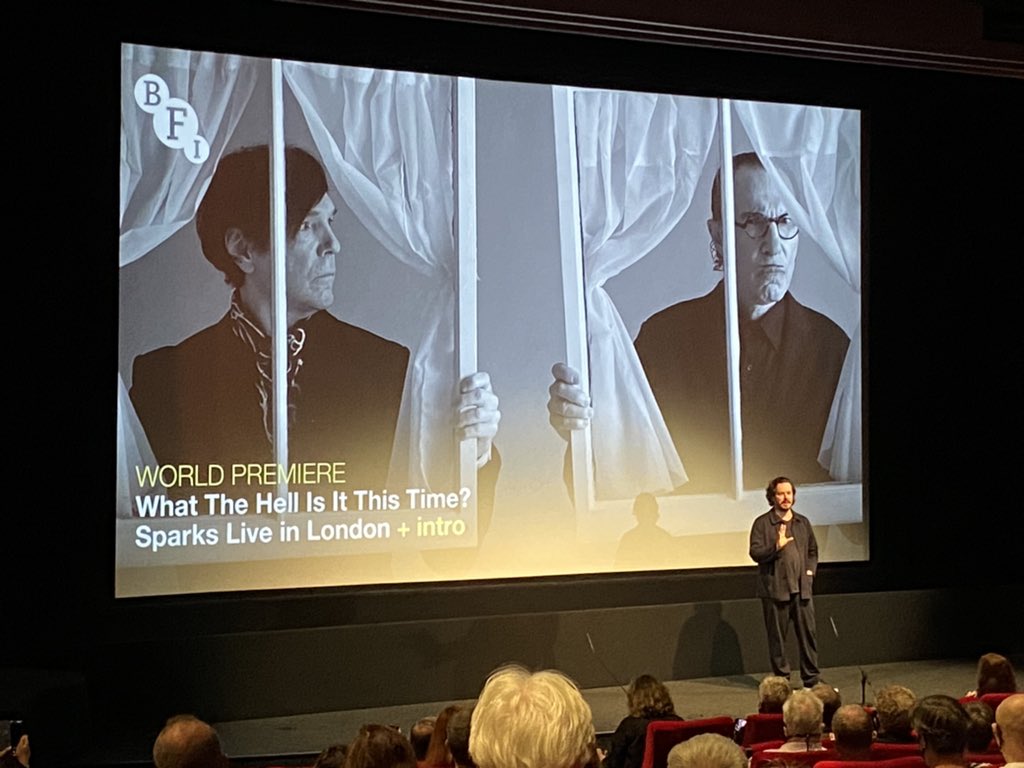 Anyway it’s a filmed show from a 2018 concert in London. I think the day before I went to see them so you can’t glimpse me in the crowd. Though obviously I was stood at the back being old about everything, while also being at least two decades younger than the Maels, so you wouldn’t have seen me anyway.

At the BFI, Wright said that as he’d got Sparks to agree to do the documentary in 2017, he realised he needed to do a concert shoot, so filmed them toward the end of the Hippopotamus tour, while also then using the fact that he was filming the shows as leverage to get backing to do the full doco. He also thought, given how prolific they are, by the time the doco was done they’d be on another tour with another album and it would all look out of date. Fortunately/unfortunately Covid intervened.

Concert films are sort of inherently boring to me to be honest, but from a directing point of view he did a great job of getting the camera to focus on some of the little details where Ron was being less impassive. I don’t mean The Ron Dance™, I mean there were loads of bits of him mouthing the words or giving little signals or eye movements that I’d not clocked at the shows, so that was great.

The band sound great, and Edgar Wright said that Russell was one of the few singers from the seventies in their seventies who still sounds like themselves. It’s 90 minutes and 22 songs across 50 years and honestly there’s maybe two points in the whole show where he doesn’t quite get volume on one of the high notes. And so much energy – absolutely stellar. The concert film really showcases him as a frontman.

I was also lucky enough that in the introductions Edgar Wright pointed out Nigel Heath in the audience who had mixed it, so I took the opportunity to briefly chat to him at the end and see if he was happy with how it sounded in the BFI. He said he was pleased with it, and it sounded great to me.

Edgar Wright basically admitted they were only doing a premiere of it so that he himself could see it and hear it on the big screen, and who were we to argue?

On the downside they finished that tour setlist with a track called Surburban Homeboy and the concert film allowed me to relieve the moment at the actual concert where I was like “This might possibly be the last time I ever see them live but also they have 350 songs over 50 years and I hate this song and I don’t understand why everybody else loves it.”

[See also when Kate Bush played live for the first time for 1,057 years and played Top Of The City and I was like, what, are you kidding me?]

Anyway – the Sparks concert movie that will be a Blu-Ray extra, I give it the thumbs up. Apart from Surburban Homeboy at the end. I haven’t seen the doco yet, I’m going on Thursday, but I don’t need to review that because Jordan Hoffman gave it a four star review for the Guardian in February, Peter Bradshaw gave it a four star Guardian review in July, and Mark Kermode gave it five stars for the Observer.

So go and watch The Sparks Brothers documentary at the cinema. Sparks are the fucking best.

by Martin Belam, August 3, 2021
I do social and explaining stuff at the Guardian. As a journalist and designer I’ve spent nearly twenty years building digital products for the likes of the Guardian, BBC, Daily Mirror and Sony. I also make electronic music about the paranormal under the name m-orchestra. I’m @MartinBelam on Twitter, and martin.belam@theguardian.com on email. Sign up to get my blog posts sent to you via email.
← Sign up to get my Tokyo 2020 daily briefing for the Guardian
A one-line review of every #TimsTwitterListeningParty I joined in July 2021 →