[This is the second in an occasional series where I ramble at length and without much focus about an old episode of Doctor Who what I have just watched on my tellybox although in this case the tellybox was the BFI screening at the weekend to celebrate the release of the Season 24 Collection Blu-Ray. Lucky, lucky you]

Back in March 2020 one of the last things that I did before lockdown was go the screening at the BFI of Doctor Who: Talons of Weng-Chiang. I remember tweeting when I arrived at the South Bank that on the tube journey there, one of the people opposite me had been wearing some sort of jerry-rigged anti-Covid mask that seemed to be made of bits of scuba equipment and masking tape. I wasn’t wearing a face mask on the tube that day. I wrote that one of us was probably mad, but I wasn’t sure which of us it was.

Fast forward 15 months and many greiving families later, and I was again at the BFI, for one of my first socialising outings for months. This time it was the 1987 Sylvester McCoy story Dragonfire that was being screened, the fourth and final story of his first season as the Doctor – which is coming out again later this month as part of the Season 24 Collection Blu-Ray.

Of course, nowadays, many of the things that grated on super-serious teenager me watching the stories for the first time in the late eighties are the things that make them endearing three decades later. The clanking over-bearing synth soundtracks (Keff and JNT, what were you thinking?), Sylv’s wink in the opening titles, the rearranged theme tune. Producer John Nathan-Turner’s eye for colour, flair and a bit of stunt casting on the side. Directors who always turned the lights up to 11.

It’s difficult through the mist of years to remember all of the exact circumstances of watching them. By this time, for certain, I had a television in my own bedroom, but I don’t think I had my own VHS machine, so I will definitely have watched some of these on the main downstairs telly, forcing my poor beleaguered family along for the ride.

Season 24 doesn’t have the best rep, but every story has something to love in it. Kate O’Mara is delicious in Time And The Rani, but I remember my dad asking me at the end of episode one if I liked the new Doctor, and me explaining that I liked the way the Lakertyan’s seemed to run oddly and the special effects of the bubble traps, but that was very much damning it with faint praise. I’m very fond of Paradise Towers now, as it seems to me the closest the show has ever come to landing in the world of the DWM comics. And Delta And The Bunnymen is a hilarious romp with great guest characters in Ray and Goronwy, who is definitely a retired Time Lord, by the way.

As for Dragonfire? Unbelievably, I remember at the time being quite annoyed by the introduction of Ace and the dawning realisation that she was going to be coming on board the TARDIS as an assistant – as we still called them in those days. 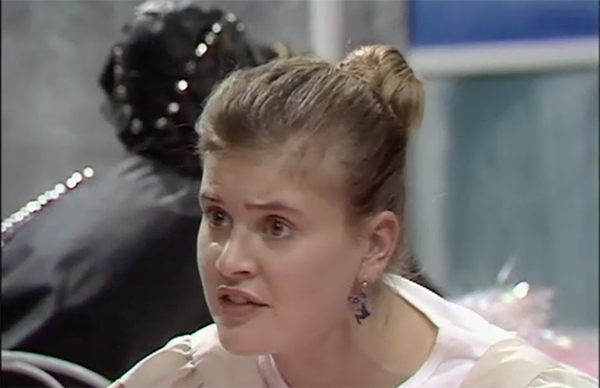 Sophie Aldred as Ace in Dragonfire

I remember feeling that it was a bit of a desperate attempt of the BBC to write a “trendy teenager” into the show – like the Kangs had been a couple of stories earlier – and cringed at her saying things like “wicked” and “naff”. Little did I know that I was on the cusp of a lifelong crush on Sophie Aldred and the development of one of the best Doctor/companion pairings of the whole history of the show. “Do you feel like arguing with a can of deodorant that registers nine on the Richter scale?”. It turns out my poor sixteen-year-old heart did not. 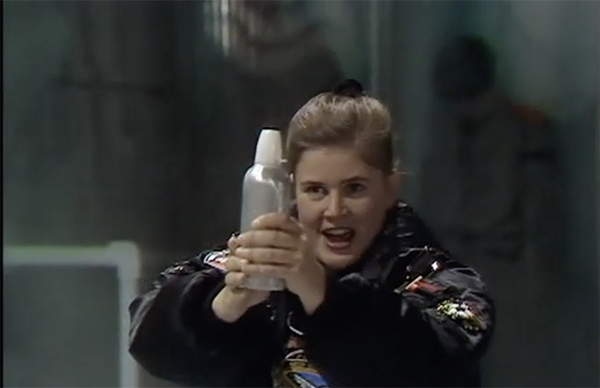 Ace threatens Kane with her own homemade explosives

Dragonfire has its flaws, not least the notoriously ludicrous HANG-CLIFFER! when the Doctor (at least on-screen) inexplicably decides to climb off the side of an icy cliff seemingly just to put some mild peril into the episode. We now know from the novelisations that he was supposed to be shown at a dead end, with a path down the cliff the only way to further progress. And we also now know from The Name Of The Doctor that he was distracted by Clara appearing and randomly shouting “Doctor! Docter!” at him for equally no readily apparent reason. 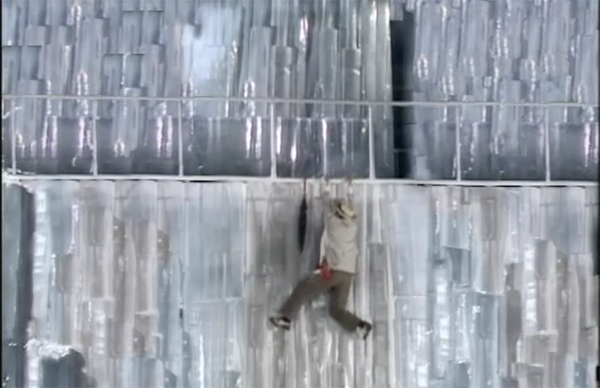 Speaking about it after the BFI screening on Saturday, Ian Briggs explained for the hundredth time that basically it was only on the day of shooting anybody would have realised the script and the set didn’t match up to what he’d imagined, but then they just went and filmed it anyway. “I’ll climb off this perfectly walkable gantry to a drop of certain death.” 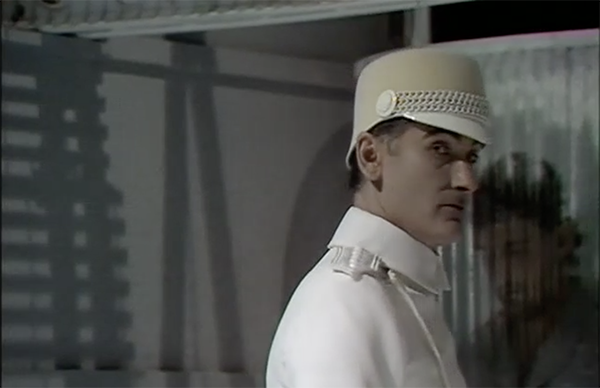 Edward Peel as Kane in Dragonfire

Edward Peel is – HO! HO! HO! – incredibly chilling as Kane, but the audience at the BFI were howling at his eulogising the beauty of the ice statue that has been carved to remember his dead partner-in-crime, when it looks like…this… 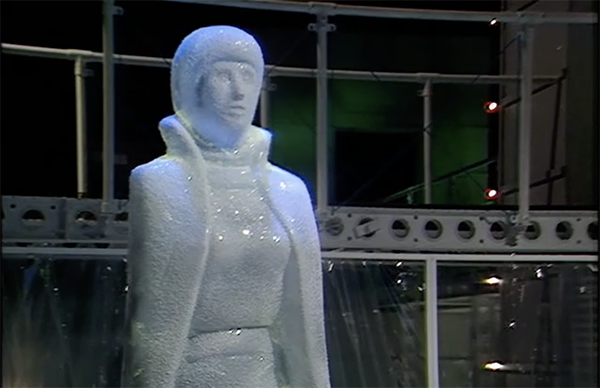 Not really the greatest ice sculpture in the galaxy

Kane’s melting face is probably the best physical VFX shot of the whole classic run of the series – I had forgotten just how briefly it was on screen though, hours to film, mere seconds to make a lifelong impression. 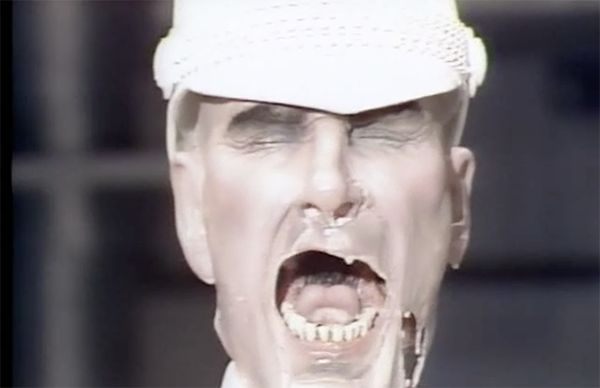 Mel’s departure is slightly odd. It’s not quite as bad as “Leela falls in love with someone neither she or we have really met much on-screen”, but there’s not much foreshadowing that she’s gonna take Sabalom Glitz on a “Do the right thing” galactic tour to straighten his scoundrel ways. The story instead spends a lot time pairing Sylvester & Tony Selby to great comic effect. 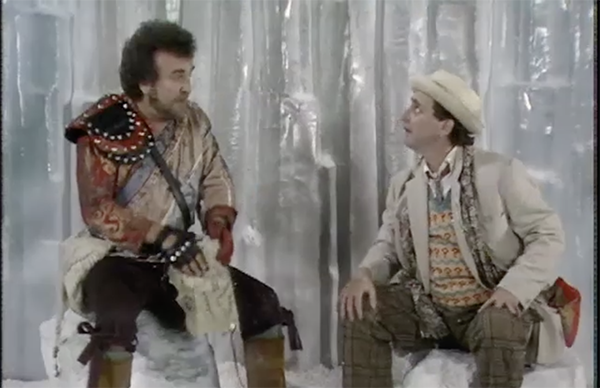 Sylvester, of course, plays Mel’s final scene beautifully. It is one of the moments from Season 24 where he has completely nailed his Doctor, and it is a beautifully written speech. But it also says something about the lack of actual character anyone developed for Melanie Bush beyond “It’s Bonnie Langford screaming in Doctor Who!” that Mel’s departure is mostly about the wistfulness of the seventh Doctor. 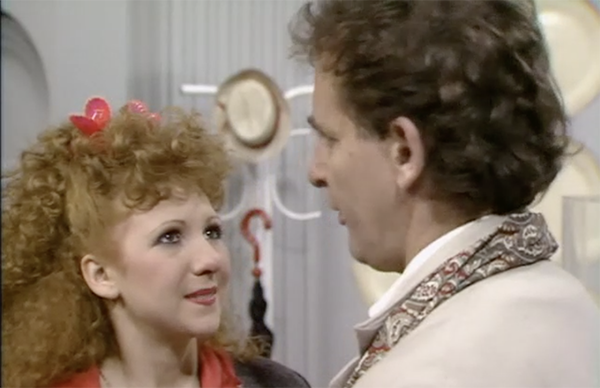 At the BFI screening writer Ian Briggs explained that in part this was because it was a mash-up of him writing Bonnie’s exit, and Sylv wanting to perform on screen an Andrew Cartmel speech that he’d done in his audition.

Dragonfire has also got that great scene where the Doctor tries to distract a guard with some random philosophical chat, and ends up being asked “Tell me, what do you think of the assertion that the semiotic thickness of a performed text varies according to the redundancy of the auxillary performance codes?” and just says “Yes…?”. 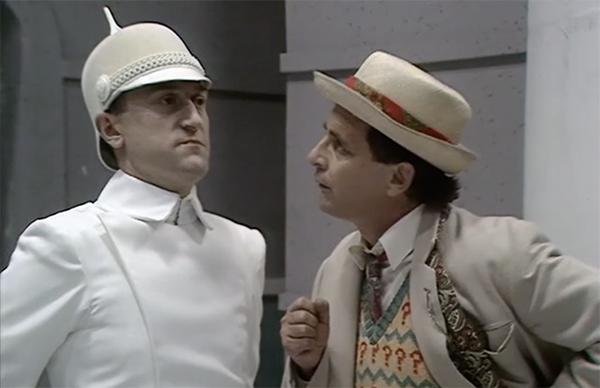 The guard and the Doctor

It’s an interesting reflection of the different ways that actors have tackled the role over the years that you can imagine Tom Baker, Peter Davison and Matt Smith’s Doctor getting themselves into this scenario and having fun with the scene like Sylv did. You absolutely cannot imagine Hartnell or Pertwee or Colin Baker getting into that situation. 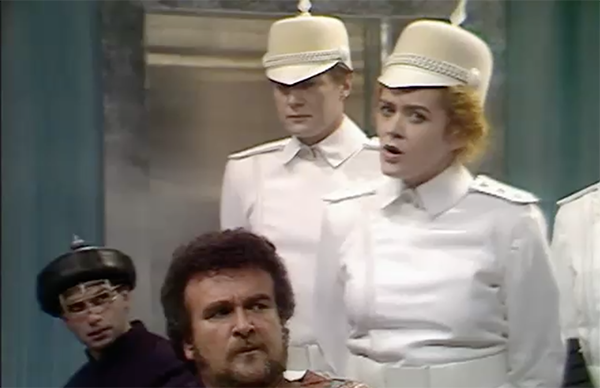 Patricia Quinn is in the show, but as I’ve never been a massive Rocky Horror fan I’d never made the link until watching this screening and they showed some clips of her from one of the documentaries on the new Blu-Ray set. She’s superb as the bitterly dry Belazs in Dragonfire, although I always forget how early she gets killed off in the story.

One thing that I remain unconvinced by was Ian Briggs explaining that they had three sets for the ice caves, and they shot them from different angles with different lighting supposedly to symbolise them getting deeper into the frozen planet. But, newsflash, it just looks like the same three sets over and over again. 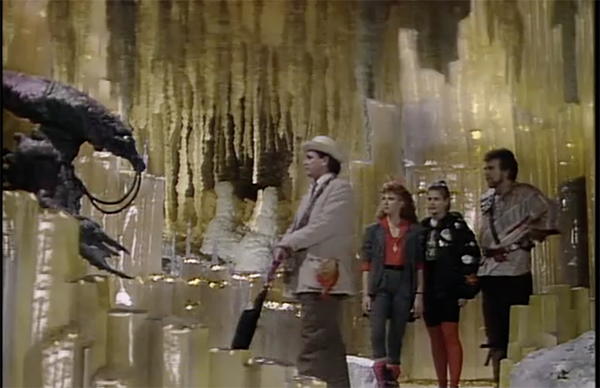 The lower ice levels of Svartos

That’s probably the biggest flaw of the story. Kane’s been waiting three thousand years to get hold of the treasure, and the Doctor basically walks through the same corridor five times and the dragon just offers it to them. How was it ever a problem to find and kill the dragon before the Doctor arrived? Not helped by the fact that they are supposedly super deep into the ice caves, but also able to keep nipping back every couple of minutes to pick up supplies or have a scene in Kane’s lair or have the monster take a random lost toddler back to the supermarket. 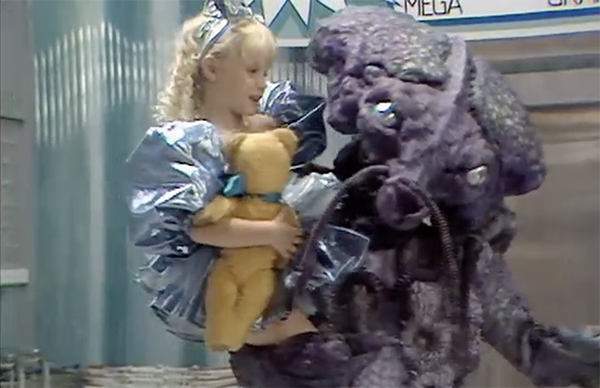 “I’ll just drop you off here…”

It’s a story I still really enjoy though, with some great bits of dialogue, some dark under-currents of Glitz selling his crew into slavery, decent villains, the cool regret of Belazs and the debt she can only repay in the end with her life, a monster they get away with because they don’t use it too much, lots of fun with Glitz, and the start of the Doctor and Ace partnership that was going to bring so much to the closing years of the classic run of the show. It’s a 4/5 for me. 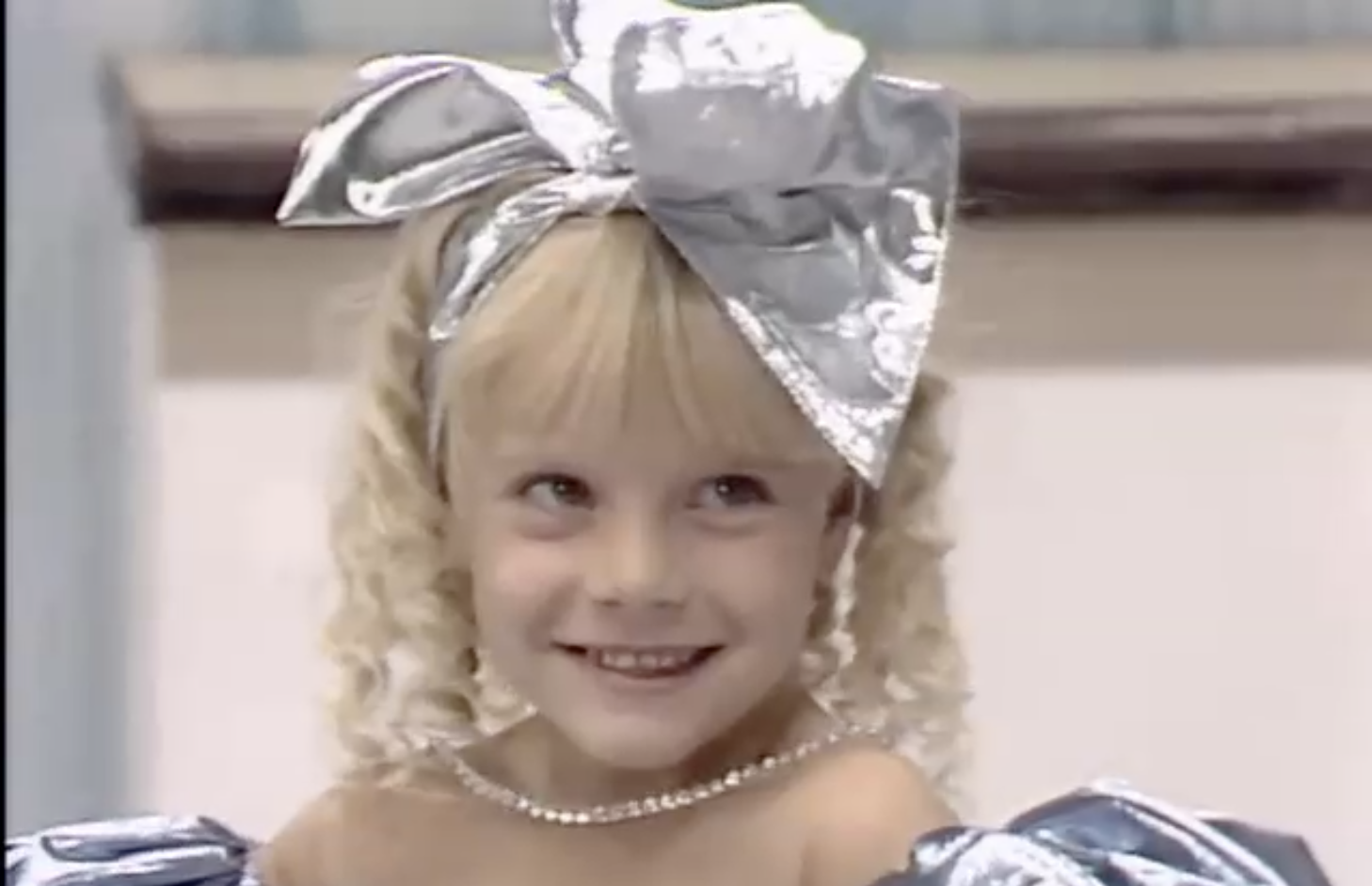 Stella reacts at the end of Dragonfire to the TARDIS dematerialising

by Martin Belam, June 14, 2021
I do social and explaining stuff at the Guardian. As a journalist and designer I’ve spent nearly twenty years building digital products for the likes of the Guardian, BBC, Daily Mirror and Sony. I also make electronic music about the paranormal under the name m-orchestra. I’m @MartinBelam on Twitter, and martin.belam@theguardian.com on email. Sign up to get my blog posts sent to you via email.
← Doctor Who: Time Fracture spoiler-free review
A one-line review of every #TimsTwitterListeningParty I joined in June 2021 →