Nobody has asked for this. It is more for my benefit than yours. It’s a monthly series. I’ve marked LPs that I’d never heard the whole way through before with a 🆕 icon. The links (mostly) go to the album on Spotify.

🆕 Bo Ningen Sudden Fictions – my first #TimsTwitterListeningParty for over a month, and I don’t know why I knew I would like Bo Ningen because I don’t recall having any of their records or ever seeing them live, but I was sure I would and I did. A lovely and fearsome racket at times, but still with a keen ear for melody and some really great production.

Vanishing Twin The Age of Immunology – I knew this album a bit because I saw them supporting Stereolab in 2019, so had listened to it in advance. It is very Stereolab-adjacent but that’s no bad thing, and I feel I should maybe have spun it after the gig again as well.

TVAM Psychic Data – genuinely one of my favourite albums of the last few years and great to have an excuse to blast it at full volume in full again, also very impressive live, even if I’m always slightly envious of not thinking of doing the whole TV-and-VHS-on-a-trolly like you were in school in the 80s schtick myself. Especially as Joe Oxley is about twelve, and wasn’t at school in the 80s. 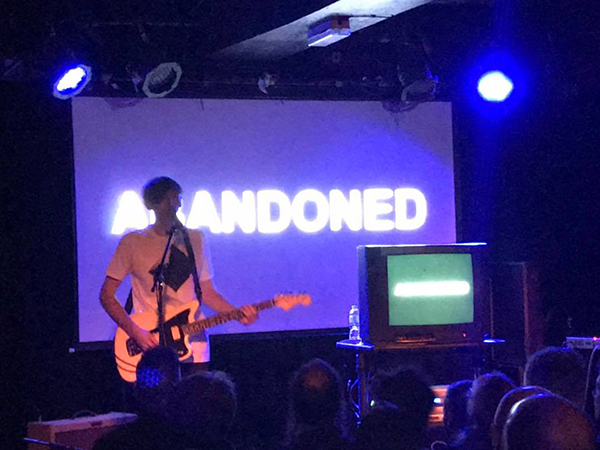 TVAM live at the Lexington

🆕 Girl Band The Talkies – of all the recent bands where people have said they have a bit of The Fall in their DNA (although I was also hearing a lot of Killing Joke on this) I think this is one of the better lots, because of the production I think more than anything else, but the name puts me off and it was both too much and not enough at the same time, if that makes sense?

🆕 Orla Gartland Woman On The Internet – a new artist for me and I couldn’t resist an LP title like that, it didn’t disappoint, being lyrically sharp and rocked out a bit more than I had anticipated, a little bit Katy J Pearson adjacent.

🆕 Michael J Sheehy Distance Is The Soul of Beauty – I’ve not really followed his career but remember being obsessed with Mark’n’Lard playing No One Recognised Him back in the early 2000s and having that on repeat. It was nice and melancholy enough but nothing on this album touched the heights of that.

The Rolling Stones Between The Buttons In honour of Charlie Watts, it isn’t one of the better known Stones 60s albums, it is kind of the calm before the storm with the run of Their Satanic Majesties, Beggars Banquet, Let It Bleed, Sticky Fingers and Exile on Main St the next five to come along. Nevertheless – assuming you listen to the US track-listing which appears to be standard now – it has imperious hits in Let’s Spend The Night Together and Ruby Tuesday on it. All Sold Out could have been a single too, and Who’s Been Sleeping Here kind of points they way forward to Beggars and Let It Bleed. Fucking weird end to Something Happened To Me Yesterday though, they must have started smoking by then. My main Rolling Stones anecdote is that I went to see them at Wembley Stadium the night England were playing Germany in the semi-final at Italia 90, and at the time they were already considered golden oldies and nicknamed the Strolling Bones etc and now when I look up their ages I realise they were pretty much the same age I am now and I thought that was ancient then so I guess I am ancient now.

Blur Leisure Because of Jesus Jones and Diesel Park West I was already mad into collecting releases on Food Records so was very up for She’s So High / I Know when it came out. I saw them at ULU before the album came out, maybe after Bang, I can’t quite place it, but I remember you could by proper massive fly-poster sized versions of *that* hippo artwork. I remember saying to my mate Stuart that they reminded me of The Hollies because of the harmony work and I guess some of the weirder lop-sided more psychedelic b-sides from around this time, I think they must have played thinks like Mr Briggs at that gig. Slow Down is kind of like Popscene and Turn It Up and Oliy Water, a kind of entirely different direction Blur could have gone in. I got rid of all my vinyl years ago but I used to have a promo only 12″ with extended mixes of Bad Day and High Cool – I guess the mixes were made in case they were used as additional singles? Difficult to put into words what a huge anthem There’s No Other Way was if you were the exact right age when it came out in April 1991. I was. And then considering that the label had been gunning for stuff like Bang as a hit and There’s No Other Way was the trail-blazer, Birthday and Wear Me Down is a hell of a downer double-whammy at the end. This album maybe has the second lowest rep of any Blur album but … it’s still really good innit?

by Martin Belam, September 6, 2021
I do live blogging, news stories and quizzes at the Guardian, and help cover Eurovision and Doctor Who for them too. As a journalist and designer I’ve spent over twenty years building digital products for the likes of Sony, Guardian, BBC, Natural History Museum and Reach. You can contact me at martin.belam@theguardian.com. Sign up to get my blog posts sent to you via email.
← It’s #Sparkstember!
Thoughts on … Doctor Who: Respond to All Calls (2021) →