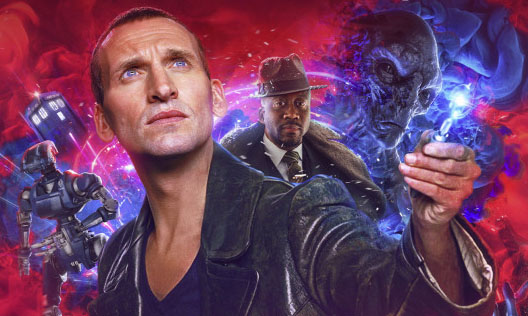 [This is the fourth in an occasional series where I ramble at length and without much focus about an old episode of Doctor Who what I have just watched on my tellybox or in this case a new one I listened to on my pocket computer device. Lucky, lucky you. Previously: The Invasion, Dragonfire and The Web of Fear]

When the embargoed press release landed in my Guardian inbox to say that Chris Eccleston was going to record some Doctor Who stories for Big Finish I genuinely gasped out loud. It was such an unexpected development. I enjoyed the first box-set of stories he featured in – Ravagers – and it was undoubtedly lovely having him back in the role, but I felt it was slightly like Eccleston being dropped into the established timey-wimey storytelling universe of Big Finish than something that faithfully reproduced the tone and stylings of his era. The latest box-set, Respond to All Calls, is an altogether different matter, and for that reason I loved it so much more.

The box-set contains three self-contained stories: Girl, Deconstructed by Lisa McMullin, Fright Motif by Tim Foley, and Planet of the End by Timothy X Atack. Of the three I’d say Fright Motif was the one I enjoyed slightly less, although I do always admire any audio story-telling attempt in Doctor Who where audio is part of the threat. But I thought Girl, Deconstructed and Planet of the End perfectly captured Eccleston’s era, and to be honest I could have imagined them as the audio to missing episodes from the era. They really had the tone and spirit of RTD Doctor Who.

With these stories set before the Ninth Doctor met Rose – or possibly in the slight gap between the TARDIS dematerialising and rematerialising right at the end of the episode Rose if you are one of those people – they need to introduce substitute companion characters and both Pearl Appleby as DC Jana Lee and Margaret Clunie as an automated guardian are great in their roles. The way the Ninth Doctor’s interactions with them are written is absolutely spot on. It’s like the opening “When I say run, run” lift scene from TV episode Rose writ large, the Ninth Doctor’s mix of incredible curiosity, weary but jokey dismissiveness, and willingness to be surprised by humans at all times.

The stories also follow well established conventions of the TV Ninth Doctor’s series. The resolutions are heavily dependent on the Doctor being a catalyst for someone else being brave and heroic. There’s loads of comedic asides which Eccleston voices brilliantly in these stories.

Planet of the End has a very RTD-era sort of foe – “what if disaster capitalism was taken to its logical conclusion” – and has lines that echo the Trump-era in the way that Aliens of London/World War Three had its “massive weapons of destruction that can be deployed in 45 seconds”. Girl, Deconstructed sets itself in a working-class area, and in the way that Eccleston’s Doctor was very happy to change human history in order to rescue the Gelth in the Unquiet Dead, he has no compunction about doing the right thing for the people involved in the story, even if it is going to have wider consequences. Both stories explore a caring relationship at the heart of them, which on audio of course entirely relies on dialogue and carefully-timed reveals.

When the Big Finish Doctor Who range started with The Sirens of Time in *gasp* 1999, there was no TV show and no prospect of one, so with the BBC books continuing the adventures of the Eighth Doctor, and Big Finish plugging gaps for the Fifth, Sixth and Seventh Doctor, that was the future of Doctor Who, and I used to buy them all religiously.

I imagine like many people, once the show was back on the tellybox in 2005, the additional stories suddenly seemed less important and less of the only continuation, so I dropped off buying them. I now tend to buy only the event box-sets of stories, like David Tennant and Tom Baker together or the Tenth Doctor meeting River Song again, that sort of thing. I instantly pre-ordered the Eccleston stories though, and am looking forward to the third instalment, Lost Warriors later this year.

I admire how candid Eccleston was about his motives in an interview to promote the first box-set. Asked what made him come back to the role he basically said “I need to provide for my family and this is a job in a pandemic”. I love the guy to pieces, and his honesty. But whatever the motivation, he really goes at the role with some gusto in the Respond to All Calls box-set, and it was an absolute pleasure to have him back in the world of Doctor Who in adventures that echoed that period of the show so well.

by Martin Belam, September 10, 2021
I do social and explaining stuff at the Guardian. As a journalist and designer I’ve spent nearly twenty years building digital products for the likes of the Guardian, BBC, Daily Mirror and Sony. I also make electronic music about the paranormal under the name m-orchestra. I’m @MartinBelam on Twitter, and martin.belam@theguardian.com on email. Sign up to get my blog posts sent to you via email.
← A one-line review of every #TimsTwitterListeningParty I joined in August 2021
Come to my party: Fireside Favourites at Walthamstow Trades Hall on 14 October →