I felt a real pang of sadness the other day when I went to a corner of the internet I’ve visited intermittently for two decades to find that it had disappeared. It has stirred up a complicated bundle of emotions.

The site was perceptions.couk.com and I first came across it when I worked at the BBC on search in the early 2000s, and the guy running it began sending me an increasingly aggressive string of messages. The site itself was a fascinating ragbag of conspiracy theories and spiritualism, and he was convinced that the BBC was deliberately censoring it in search results. At that time the BBC was trying to position itself as everybody’s browser homepage – itself a incredibly outdated concept now – and saw having access to web search as a tool to help achieve that, so for a while we were running a UK-centric, cleaned-up safe-for-work and safe-for-BBC-editorial-policy version of the Google index.

The pyramid of quotes opened the perceptions.couk.com homepage

Ray Dickenson, who ran perceptions.couk.com, was certain that we were deliberately suppressing his pages in that feed, and we got into protracted correspondence about it. We 100% weren’t, indeed we had a mechanism to totally exclude pages (I remember playing whack-a-mole with goatse mirror sites) but no ability to make a site be “it can appear but lower in the ranking”. I remember on one occasion spending a lengthy amount of time doing comparative searches on the BBC website and Google itself to demonstrate the results could be replicated, and also gave him some free SEO advice about not having a sitemap file or optimised title tags etc, that ran to well over 1,000 words. He replied in about five seconds that it was clear I was a paid agent and a liar etc etc without even having possibly taken the time to read it. That really stuck with me.

(I still get an incredibly annoying variation on this now, with the Guardian Thursday Quiz. Without fail at least one person will email every week going “A-ha actually the answer to question 10 is xxx not yyy as you erroneously claim” and they won’t have actually looked it up themselves, but think they are right from memory. I’ll always politely respond to demonstrate why I’ve given the answer I have with hyperlinks to back it up and unfailingly nobody ever, ever, ever, ever fucking replies to apologise or acknowledge they were wrong. So quick to jump in with a “GOTCHA MISTER JOURNALIST”, an eternity to say sorry. I digress, I’m very fucking bitter about this.)

Anyway Ray used to have a page on his website called “Bug Brain Check-In” about the BBCi website, as it was then branded. It was about this whole search hoo-haa and used to sometimes quote my emails so I used to keep an eye on it. I actually wrote about this page back in 2009, and even used it as an m-orchestra song title at the time, a track which still sometimes gets played live.

The Bug Brain Check-In page on perceptions.couk.com as it appeared during the 2000s.

Now, the eagle-eyed among you will spot from that old screenshot that he was also interested in “the BBC’s work for pervs”, and quite a chunk of the old perceptions.couk.com site was dedicated to the theory that the BBC was complicit in covering up a huge organised paedo-ring of the elites. I’m sure Ray would have felt very at home with the Q-wagon in recent years.

Anyway, I remember when all the Jimmy Savile stuff eventually came out in 2011, long after I’d left my job at the BBC, I was suddenly like “OH MY GOD THAT GUY!” thinking about how justified and vindicated he would feel, and so rushed back to the site whose URL was burned into my mind and … his website was making no mention of it. 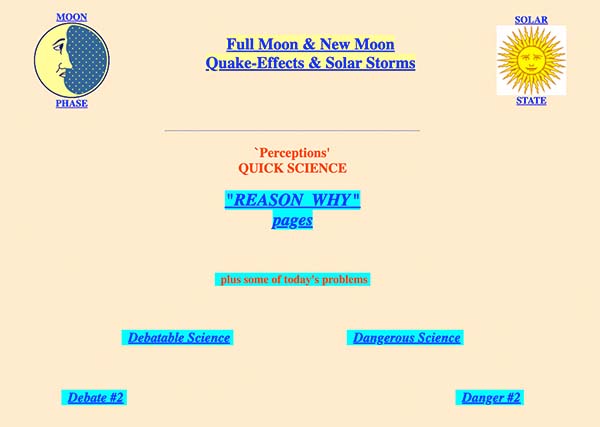 A section of the perceptions.couk.com homepage

Instead his main thing at the time seemed to be analysing artefacts on compressed jpeg images to “prove” that NASA were faking the images coming back from Mars or something. It made me feel really sad that the mindset that produced a website like that couldn’t even seem to ever be happy that something they had believed and been labelled a conspiracist for was true, they had just ploughed straight on to the next “truth-seek”.

Since then I’ve periodically checked in on the site because I find the conspiracy mindset fascinating in and of itself, and as regular readers will know, I do like the Fortean and the weird and unusual and there would always be some interesting tangents.

This week I saw a story that the Chinese rover on the moon had driven closer to that mysterious cube it had spotted on the horizon, but actually it turned out to be an ordinary rock and yet again I was “OH MY GOD THAT GUY!” thinking that he would definitely have some stuff about this and … the website was not there anymore.

As far as I can tell from the Wayback Machine, it only dropped off the internet around a year ago in early 2021. There hadn’t been an update to the news page since March 2020. He has/had a Facebook profile which links to the site but hasn’t been posted to since 2016. I don’t really know anything about the guy except he was definitely ex-forces and really rude to me a few times via email. Digging around the Wayback Machine I found a much longer bio page about him than I’d ever noticed before which suggests he basically worked in the UK military for decades in the 60s/70s/80s, being assigned to stuff that seems decidedly shady and on the lowdown around the world, and then got extremely disillusioned upon returning to the UK, and developed his own ideas about alternative physics and alternative theories of social evolution. And he was really into reports of UFOs and unexplained astronomical phenomenon. Entertainingly in his little despatches he would write things like “You won’t hear about these unexplained flashes of light on the moon in the M_S_M” and invariably then link to something off the Independent or Telegraph or Guardian or BBC website as is so often the case with these types. 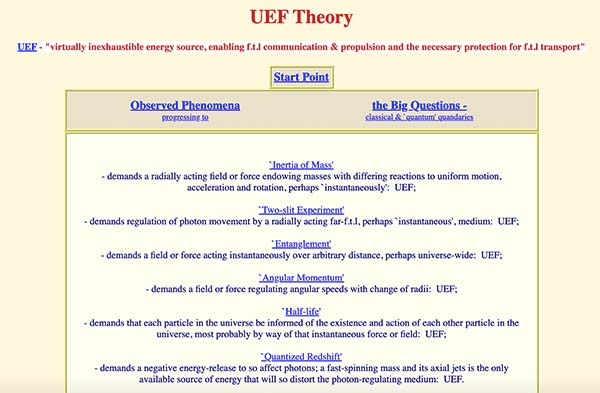 He was just kind of “a person I vaguely knew on the internet for two decades” and now I’m in this slightly weird limbo of … what? Not grief. I wrote in 2020 about what a shock it was to lose Dan Martin and Seb Patrick in short succession and the curious feeling that you are grieving but maybe you shouldn’t be because you mostly interacted online. But I did grieve them. And this isn’t grief about Ray and his website, but is definitely … loss?

Why I said it is a complicated bundle of emotions as well is that there was something so delightfully brilliant about it – all written in HTML4, essentially unchanged since the early 2000s, each page a weird hierarchy of short statements and cryptically-entwined hyperlinks with an incredibly specific hand-built index and still proudly bearing XML and RSS icons and web-ring links to the Open Directory. Visiting it wasn’t just a snapback to when the guy used to email me at the BBC, but to what being on the internet was like in the early 2000s. 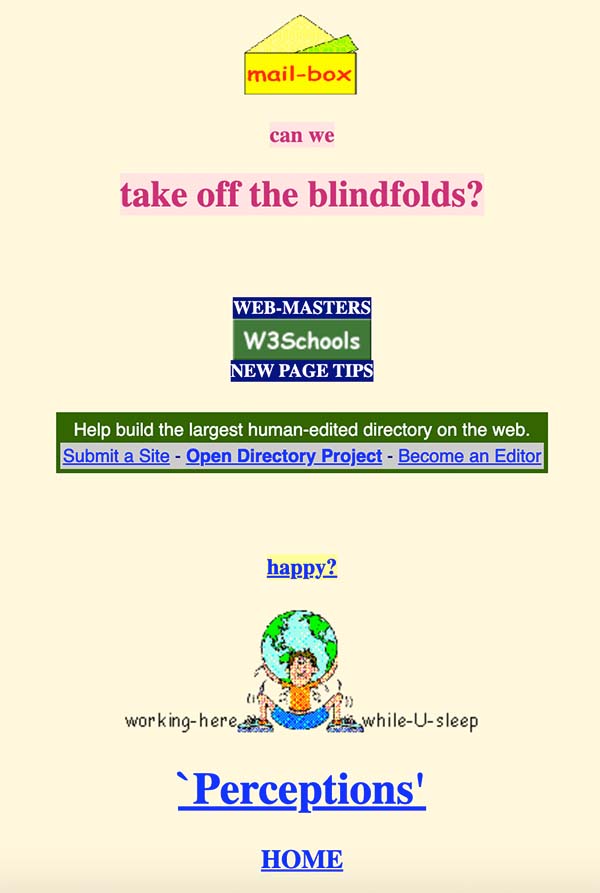 When was the last time you saw the DMOZ banner on a website? 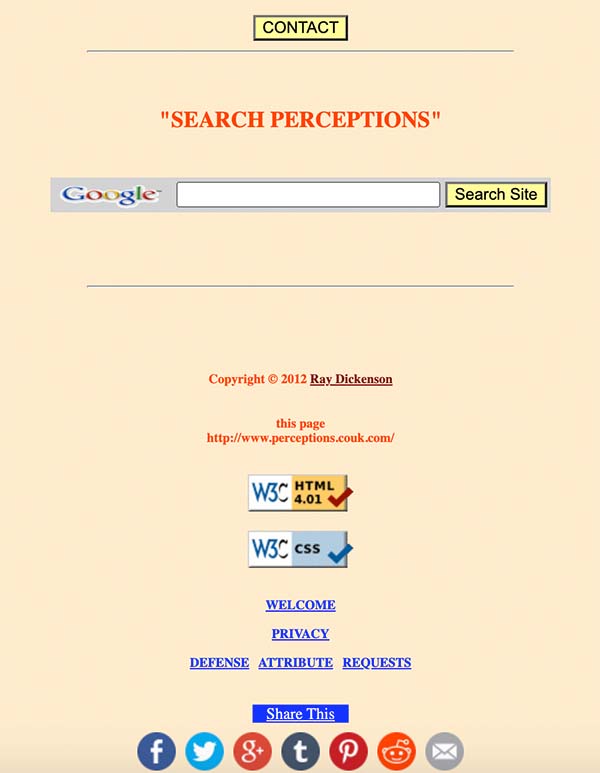 I think it is easy to get nostalgic about that at my age and from my position – “A-ha! A simpler time!” – when the internet was going to just spread benign and definitive knowledge and give anybody with web access a voice. A huge equalising force. Which obviously at that point meant anybody in the world who mostly looked and thought like me, with the right computer equipment and the ability – or the parents – to pay their modem bills. And what price that naive idealism now, eh? 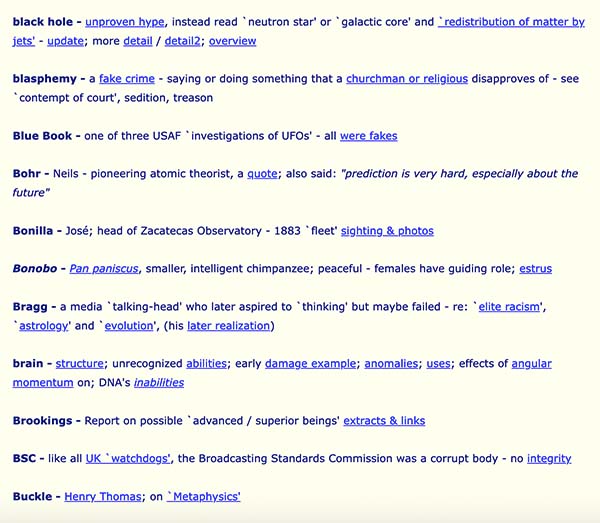 So there you have it. A thing that has always been on the internet for me appears to have gone? Maybe? That website was such an obvious labour of love for him that he had built up over decades I kind of can’t imagine it disappearing unless something bad had happened. Maybe he just gone underground and switched to 8kun and Gab and Telegram or something, or just let the domain name lapse by accident and will be sending me another angry email soon that this whole blog post has been a travesty. I don’t know, but I can’t help but fear the worst – that he is truth-seeking now on a different level.

by Martin Belam, March 5, 2022
I do live blogging, news stories and quizzes at the Guardian, and help cover Eurovision and Doctor Who for them too. As a journalist and designer I’ve spent over twenty years building digital products for the likes of Sony, Guardian, BBC, Natural History Museum and Reach. You can contact me at martin.belam@theguardian.com. Sign up to get my blog posts sent to you via email.
← Friday Reading S13E08
Friday Reading S13E09 →