Guardian article about the 1996 Doctor Who TV movie

This was too late to go into yesterday’s newsletter but I’ve done a piece for the Guardian about the 1996 Doctor Who TV movie starring Paul McGann. It is pegged to a new documentary – Doctor Who Am I? – that is being screened in London for the first time today. 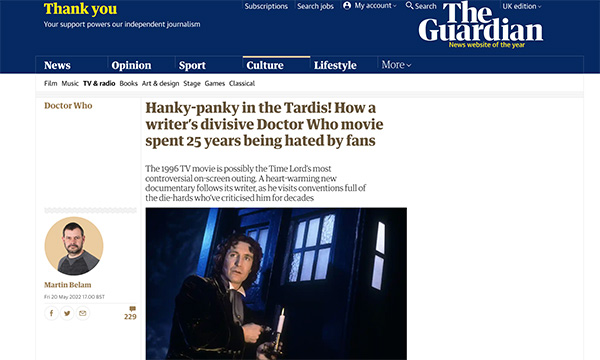 Hanky-panky in the Tardis! How a writer’s divisive Doctor Who movie spent 25 years being hated by fans

Matthew Jacobs and Vanessa Yuille were a joy to interview for this. Jacobs wrote the final version of the TV movie, and Yuille made the documentary with him. And I got to speak to Eddie Robson and *sigh teenage crush* Sophie Aldred when I was putting it together too, so thanks are due to them.

For all the criticism it gets, Paul McGann is head and shoulders the best thing in that movie. I cannot tell you how excited I was when he came back for Night of the Doctor. I was lucky enough someone messaged me to see it as soon as possible and avoid spoilers at all costs and so I managed to watch it on an iPad at Preston train station without even knowing he was going to be in it. What an unexpected joy.

And one of the first comments under the article was: “Martin, tell the truth: those are your bloody magazines, aren’t they.”

I felt so seen. 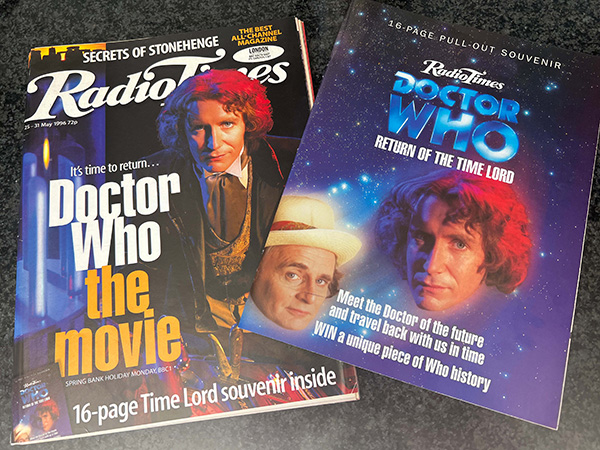 My Radio Times Doctor Who magazines from 1996 that have now starred on the Guardian website.

But absolutely bizarrely as part of my gradual clear-out I had chucked into the recycling a load of old Doctor Who magazines and bits’n’bobs which I had noticed included the 1996 TV movie stuff just days before I got commissioned to do the piece. So I ended up fishing them out of the bin for their photo op. It was meant to be.

by Martin Belam, May 21, 2022
I do social and explaining stuff at the Guardian. As a journalist and designer I’ve spent nearly twenty years building digital products for the likes of the Guardian, BBC, Daily Mirror and Sony. I also make electronic music about the paranormal under the name m-orchestra. I’m @MartinBelam on Twitter, and martin.belam@theguardian.com on email. Sign up to get my blog posts sent to you via email.
← Friday Reading S13E19
Friday Reading S13E20 →