Looking at the whole Jeffrey Toobin hoo-haa, in the end, I just think keeping your wanger in your pants while at work is a really low bar to have to clear.

And this from Katelyn Burns was 💯🔥

I want to ask a hypothetical about Toobin and his male media defenders. What if Toobin had been caught doing the same thing, but he was a trans woman? Besides the fact that there are no trans people of Toobin’s stature in media, the answer is he’d be instantly deleted from public life, and his actions would be cast upon the entire trans community.

If Jeffrey Toobin Was a Trans Woman…He’d be banished from public life forever. Instead, media men are imploring for forgiveness.

An extremely grumpy ad person writes: “Confessions of a media buyer: Facebook updates have ‘wrecked the ad platform on the backend’”

I was writing a piece about interactive quizzes this week, and in the process of doing some research, I found for the first time that Tom Scott has put up a selection of 6 old UsVsTh3m games that he worked on. It’s lovely that some of this work is preserved – I’m still so proud of the output – and Tom is typically gracious in the way he bills it…

I want to stress: I just wrote the code! These games were produced by a team of many talented people who came up with ideas, illustrated, wrote jokes, and playtested. While I’ve resurrected a few games here on my site, the credit goes to everyone on the team! 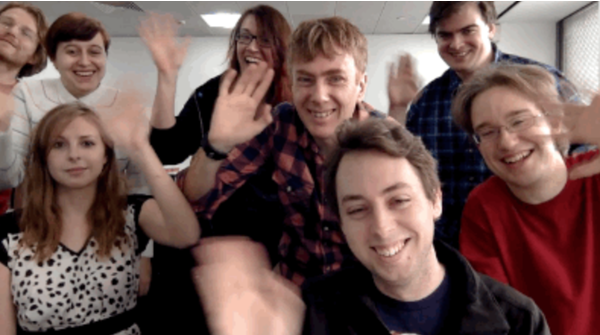 Talking of people who used to code stuff for UsVsTh3m, oh Paul…

I’ve chucked £15 at food banks rather than pay to watch the Leeds game tonight. Feed kids, not PPV.

Blackpool Remembered is a free digital ebook, collated and edited by John Collier. It celebrates the original Doctor Who Exhibition on Blackpool’s Golden Mile, which ran from 1974 to 1985. It’s about 1,057 pages long. People had a lot of memories. I never got to go 😕

I am in awe of Professor Danny Dresner. How to sneak Doctor Who cosplay onto BBC News by Alex Skerratt.

A really thoughtful post from Talk Talk’s Paul Webb aka Rustin Man about time and space in writing and recording music:

Since the 60’s, studio engineer Phill Brown has worked on many classic albums. I’ve learned a lot from him through the years. Phill once told me that one of the things he enjoyed about recording and mixing on old tape machines was having to wait for the reel to roll back to the beginning of the track or the section he was working on. He said this stop, start delay in his workflow due to the tape rewinding, gave him important time to reflect on what he was doing and what he was going to try next.

On the computer you can jump to any section of a song you’re working on in a second, making it easy to work fast and instinctively. As marvellous as this is, Phill’s philosophical approach to the passing of time when creating music is still a valid one. I‘ve found when writing music, the time spent not working on it, is just as important as the time you are.

31/10: Live, late and haunted as part of V-EM 5.0. There will be at six electronic acts playing from 9pm to late and since it is Halloween itself, my contribution will be a unique set with a unique presentation.

7/11: An extended live streaming set for Nick’s Virtual Garage which will be available across several different platforms.

by Martin Belam, October 23, 2020
I do live blogging, news stories and quizzes at the Guardian, and help cover Eurovision and Doctor Who for them too. As a journalist and designer I’ve spent over twenty years building digital products for the likes of Sony, Guardian, BBC, Natural History Museum and Reach. You can contact me at martin.belam@theguardian.com. Sign up to get my blog posts sent to you via email.
← m-orchestra at Halloween
Friday Reading Eats Big Dinners S10E11 →