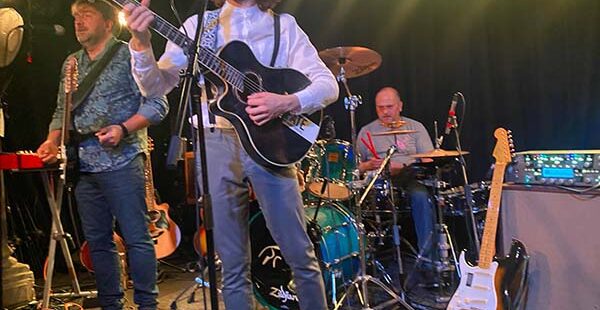 David Cooper, The Greenbank, Easton, Bristol, 1 October – There were actually two Davids on stage. One was making bleeps and drones, and the other had a drum-kit, and I think it was all improvised, it was very good. Watch it here. 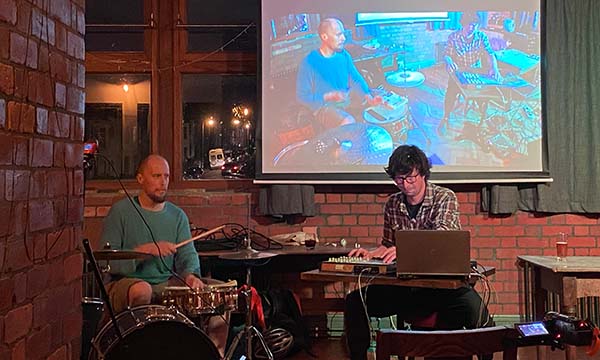 Didactic MK, The Greenbank, Easton, Bristol, 1 October – I’ve seen her before at an EMOM, she makes uplifting and questioning hip-hop. Watch it here. 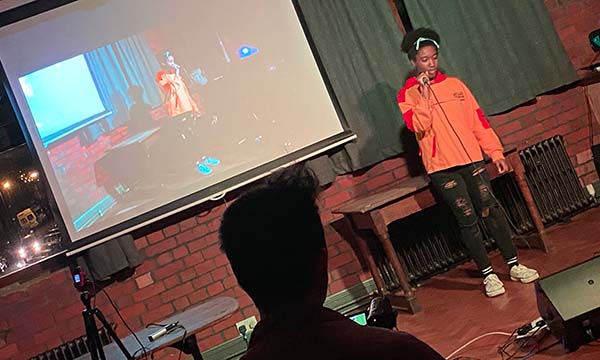 m-orchestra, The Greenbank, Easton, Bristol, 1 October – This appearance may not be considered canon because I forgot to take my AEK Athens beanie to Bristol. Watch it here. 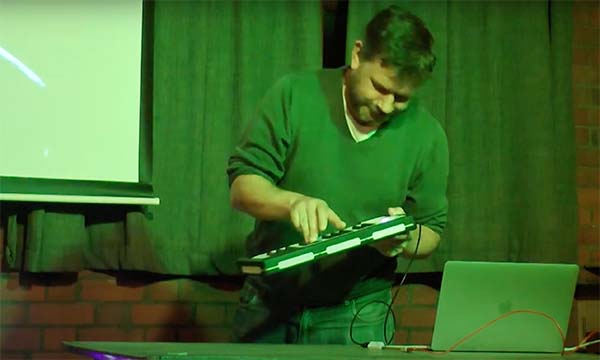 m-orchestra, without crucial hat or vintage jacket, live in Bristol.

Paddy Uglow, The Greenbank, Easton, Bristol, 1 October – Singer-songwritery stuff that seems often to be based on literary inspiration, he had one song based on a story by author Jean Giono. Watch it here. 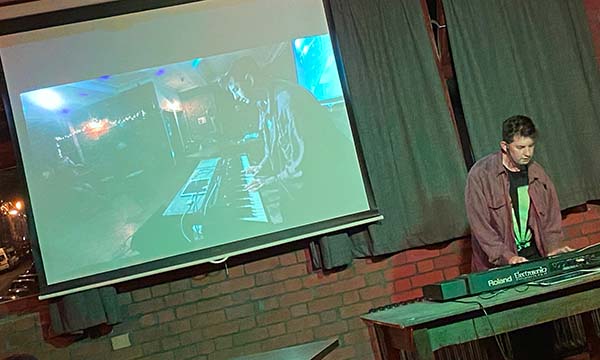 Death By Magic, The Greenbank, Easton, Bristol, 1 October – I had instant gear envy, imagine being able to break out a keytar like that. They describe themselves as “dark synth pop” on Bandcamp and it basically sounded exactly like how this picture looks. Watch it here. 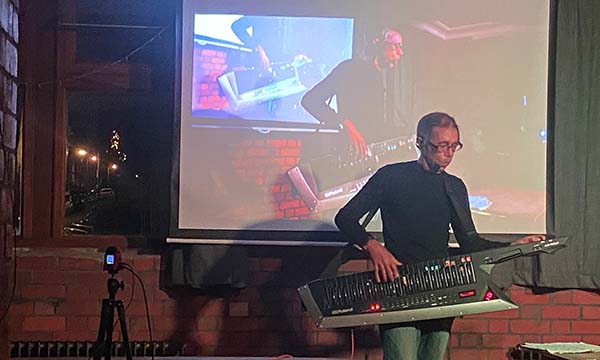 Death by Magic at Bristol EMOM

Linus Fitness-Centre, The Greenbank, Easton, Bristol, 1 October – It was great to see Linus not having to battle with grumpy sound engineers like last time. Watch it here.

Al Tanner, The Greenbank, Easton, Bristol, 1 October – Had some sort of modular set-up with little wires and stuff and started out ominous and then went all blippy-bloopy but I have to confess by this stage of the evening I was rather drunk. Watch it here.

Lifewing, The Greenbank, Easton, Bristol, 1 October – Had bit of a late 80s/early 90s synth-pop pod-dance sort of vibe to it, but I am now judging this mostly by watching back the video because I’ve got no recollection of the end of the evening except that once I left the venue I got lost in Bristol getting back to my hotel, d’oh! Watch it here.

Alexis Taylor, O2 Shepherd’s Bush Empire, 2 October – I’ve seen Hot Chip a few times and enjoy them but I’ve never quite got how revered they are. Alexis’ solo stuff was nice though, he does have a really pleasing voice, and I enjoyed the conceit of following up a cover of Rolling Stones’ Wild Horses with Prefab Sprout’s … Wild Horses. He also had one track which I kept thinking was going to break into either Can’s I Want More or the bit in Dire Straits’ Private Investigations when it all kicks off which I approved of.

Scritti Polliti, O2 Shepherd’s Bush Empire, 2 October – They were playing their classic Cupid & Psyche 85 album in full plus a selection of other bits and bobs, it is one of my favourite albums of the period and I was somewhat obsessed with how Rhodri Marsden was trying to play seven-different keyboard parts at the same time on some of the songs. 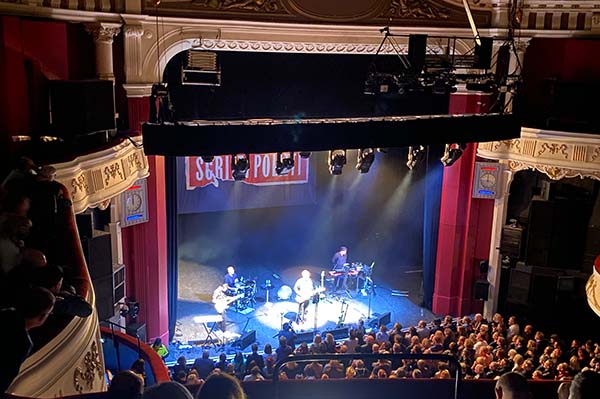 Will Sergeant, Trades Club, Walthamstow, 7 October – Echo and the Bunnymen star talking about growing up in Liverpool and the early days of the band. He was funny and engaging, and although I was never a massive Bunnymen fan at the time it was really interesting.

Fossil Fools, The Water Rats, Kings Cross, 9 October – I’ve never been one much for tribute bands or cover acts but this caught me eye as, let’s face it, I’m never going to get to see XTC live, and even in the unlikely event they did reform and tour Andy Partridge has gone full on tinfoil-cuckoo-clock. The songs are great, and I was right down the front so it was really interesting to see how they were being played. The Water Rats was packed for this, comedian Stewart Lee was there, as was The League Of Bald-Headed Men. 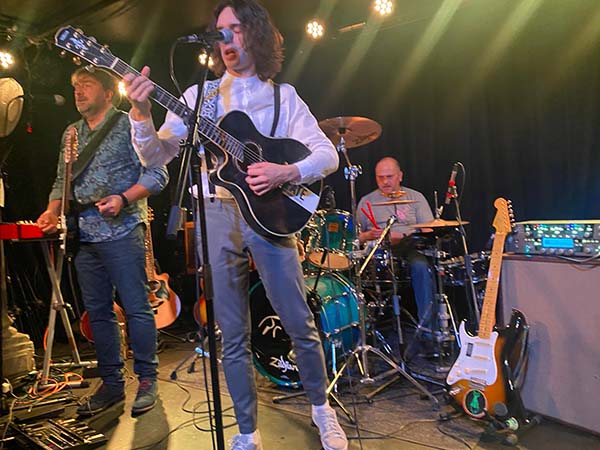 Fossil Fools was one of those gigs where I used to think “Everyone here is a weirdo” but it has taken me around fifty years to realise that, no, Martin, it is you that is the weirdo. That is why everything you go to that you really love – Doctor Who events, Sparks movies, looking at trains, football awaydays etc – is very often mostly full of slightly obsessive men-of-a-certain-age who then write it all down in spreadsheets and blog posts. 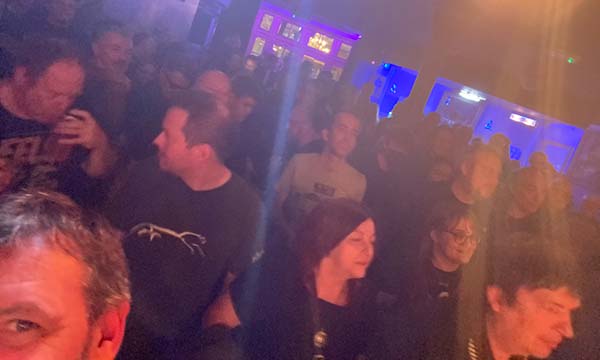 The audience at the Fossil Fools gig, you can’t quite see the sheer number of bald-headed men who were there from this angle

m-orchestra, Trades Hall, Walthamstow, 14 October It’s my birthday party and I’ll play if I want to. As Chris Evans who was there observed “Nothing screamed happy birthday more than a list of wounds on a corpse”. 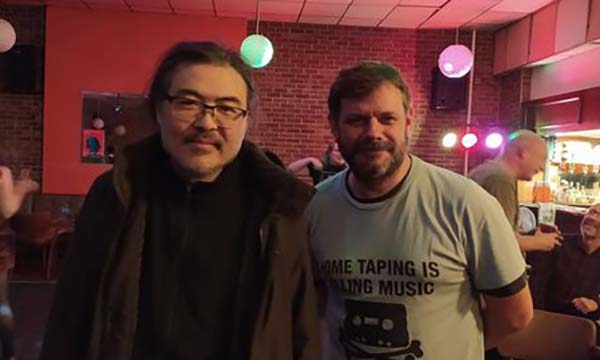 Meatraffle, The Grace, Islington, 16 October – I had in mind that I’d seen them before and not enjoyed them – a quick check through my records indicates this was at the Moth Club in 2019 with Madonnatron and Deep Tan – but either they’ve changed or I’ve changed, as I thought this was very loud and good, particularly the last couple of numbers where it got funkier. Someone said it had a bit of a Dexy’s vibe, trumpet, funky bass, disgruntled sounding man lamenting that the world has gone to shit, that sort of thing. 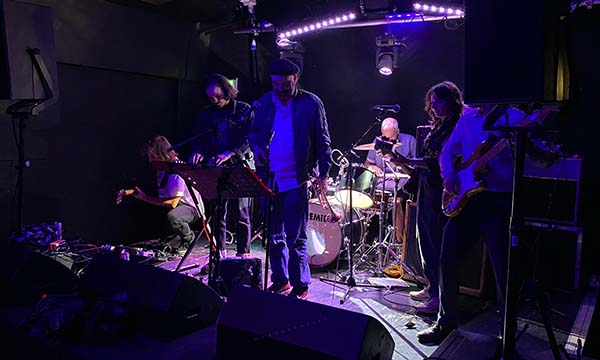 Meatraffle at the Grace, Islington

Imperial Wax, The Grace, Islington, 16 October – Much louder and more intense than I’ve seen them play before. They’ve got a new bassist replacing Dave Spurr who has retired to Cornwall to run a business or something, so now it is only 50% ex-Fall members. I began wondering if they carry on like this, and we’ll end up having started to see Imperial Wax because it was the core of the Fall’s final line-up, and they’ll keep losing them, until we are all going to see an Imperial Wax that doesn’t have any ex-Fall members in it anymore, like the Ship of Trigger or Theseus’ Broom. I got a chance to chat to the new bassist, and to guitarist Pete Greenway, and to meet a couple of friends and people that I know from the extremely online The Mighty Fall Facebook Group and it was all finished by 9.30pm, meaning it was an excellent Saturday night for an old codger like me. My ears were still buzzing and ringing the next day … 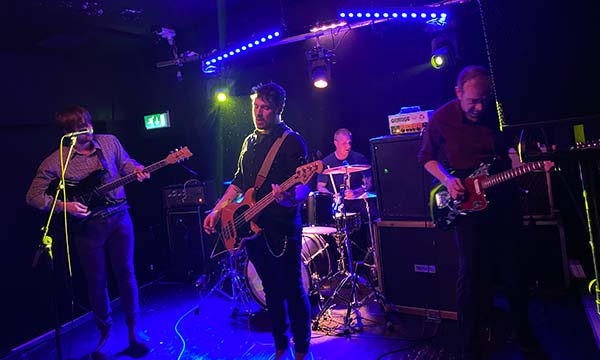 Imperial Wax at the Grace, Islington

Blancmange, The O2 Arena, 17 October – … which was unfortunate because me and my muddled hearing were straight off to a somewhat contrasting gig on the Sunday. I had low expectations of Blancmange because I haven’t really liked the stuff put out under the name recently, but as an arena tour support slot the set was very heavy with classic-era Stephen-Luscombe-in-the-house songs and only a couple of new ones, which came across perfectly well on the night. Neil Arthur was in good voice.

Erasure, The O2 Arena, 17 October – Andy Bell is 57 and Erasure have so many hits that if he wants to come on stage with his nips out dressed like Rupert The Bear, who is going to stop him? 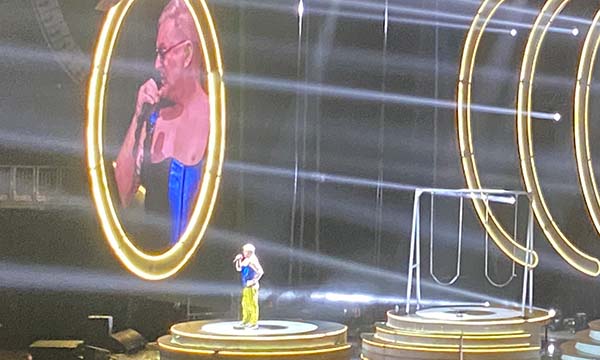 Andy Bell at the O2 Arena.

He was on fine form, Vince even smiled at least once, they have such an amazingly strong catalogue of songs that I don’t think they get enough credit for. Over the last few years they’ve been quietly putting out tracks like Nerves of Steel which would have been effortlessly top ten hits if they had come out in 1991. They bought a choir on at the end to do Oh L’Amour and A Little Respect and I’m afraid something got in my eye. 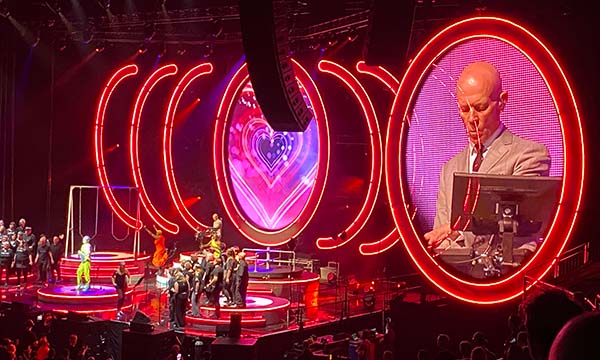 Vince Clarke and Erasure at the O2 Arena.

Rob Young, Trades Hall, Walthamstow, 26 October – Not a gig as such, but another really good interview/book signing event from Mark Hart’s Walthamstow Rock ‘n’ Roll Book Club. Rob’s book is about the history of quirky weird and disturbing British film and television, so taking in obvious targets like Quatermass and Doctor Who, but also the wonder of public information films and M. R. James ghost stories and things like the Stone Tapes and the folk horror of Blood On Satan’s Claw so obviously I absolutely lapped it up.

Halina Rice, Trades Hall, Walthamstow, 28 October – A cool mix of shorter more abrasive abstract pieces and some of her recent tracks like Breaks and Terrain which are full-on melodic techno, with some great visuals and also had managed to turn the Trades Hall into a very dark and moody atmospheric venue.

m-orchestra, The Night Owl, Finsbury Park, 29 October – I did this one in full costume as a cursed skeleton monk. Of course I did.

Rude Mechanicals, The Night Owl, Finsbury Park, 29 October – This is the third time I’ve seen the Rude Mechanicals, but the first time I’d been behind-the-scenes so got to saw them sound-checking and the gradual transformation from a meek and mild bunch of lovely people to the wigged-out glam racket that they perform as.

Bauhaus, Alexandra Palace, London, 30 October – There was a bit in the middle of the set where Bauhaus did Terror Couple Kill Colonel / She’s In Parties / Kick In The Eye / Bela Lugosi’s Dead in succession and it may have been 22 of the most intense and best minutes of live music I’ve ever seen. I’d never seen them before live, although I did see Pete Murphy a couple of years back. He’s lost none of the power of his voice, it was just so intense, and it helps that you could cast him in a biopic of Christopher Lee or Peter Cushing these days. Brilliant stuff.

by Martin Belam, November 1, 2021
I do live blogging, news stories and quizzes at the Guardian, and help cover Eurovision and Doctor Who for them too. As a journalist and designer I’ve spent over twenty years building digital products for the likes of Sony, Guardian, BBC, Natural History Museum and Reach. You can contact me at martin.belam@theguardian.com. Sign up to get my blog posts sent to you via email.
← Friday Reading S12E04
Friday Reading S12E05 →