Nobody has asked for this. It is more for my benefit than yours, I guess. It’s a monthly series now. Links go to the artist website. Maybe your interest will be piqued by one of the reviews. Maybe you’ll scroll straight past. Maybe you’ll unsubscribe thinking whatever did I ever see in this blog? Friday Reading is coming back regularly soon, I promise.

Barry Cryer and Ronnie Golden, Trades Hall, Walthamstow, 2 September – They did a few songs, not really a gig, but I just want everybody to know that I ONLY BLOODY SAW BARRY CRYER IN WALTHAMSTOW INNIT etc etc

Dry Cleaning, Wide Awake Festival, Brockwell Park, 3 September – They should be a band that I like more than I do, and it was good and I was pleased I saw them, but I find her dry delivery is so divorced from the music. She never reacts vocally to what the band have done. The band never react musically to what she has just said/sung. It’s like two different things happening simultaneously for four minutes and then they stop. I quite enjoy those four minutes but somehow want something … more? And at Wide Awake there was such a loud noise-leak into the tent of another band from round the corner it was like three things happening at once.

Goat Girl, Wide Awake Festival, Brockwell Park, 3 September – One of Goat Girl – the bassist I think? – appeared to have broken their arm so was just doing back-up vocals while someone else played the bass and there was no way to make that look rock’n’roll. I saw them in 2017 supporting The Fall when Goat Girl had brilliant songs but looked like they’d never seen their instruments before in order to actually play them. They now still have great songs, and have expanded to a much more professional sounding live eight or nine piece with violin/flute etc but they didn’t play The Man and I am still sulking about it.

Snapped Ankles, Wide Awake Festival, Brockwell Park, 3 September – A band who on record sound like they’ve compiled 1,057 sounds I like into one entity, and then still don’t quite do it for me, were absolutely blindingly good live. The best thing I saw at Wide Away by a country mile. Really, really good and I need to re-listen to all the records.

Black Country New Road, Wide Awake Festival, Brockwell Park, 3 September – I like them but I’m going to refer the Rt. Hon Gentleman to my earlier statements that I can see why people love them but also that both Crime & The City Solution and Sea Power have existed so I don’t understand why they became a big new original thing.

Dr Rubinstein, Wide Awake Festival, Brockwell Park, 3 September – I’m not a big one for dance tents or nightclubs but this was great and pushed a lot of my “maybe I should have taken MORE drugs and gone to MORE clubs in the 90s” buttons.

Daniel Avery, Wide Awake Festival, Brockwell Park, 3 September – I only saw about fifteen minutes of this after a weird interlude where somebody claimed I’d stolen their bag and then I had to spend some time convincing security that my bag was actually my bag. It was a great soundtrack to that drama though. The bag thing kind of killed the vibe for my night though.

Heaven 17 presents the Human League, The Roundhouse, Camden, 5 September – The love that had gone into recreating those first two Heaven 17 LPs was obvious, and this was a collection of some of my very favourite songs and sounds. Glenn and Martyn were very funny and entertaining between the tracks and I honestly had such a brilliant time. WXJL Tonight has always been an emotional song and I found its human fear in the face of automated radio stations even more poignant in the age of generative Spotify playlists, and the story of refugees in Dreams Of Leaving, written over 40 years ago, was made even more real with footage of wrecked cities in Syria accompanying it. At other times they used images from the Prisoner and Space 1999 and Doctor Who and it was like too many of my favourite things were happening at once. Everything I dreamed it would be. And then Martyn Ware retweeted me banging on about how good it was. 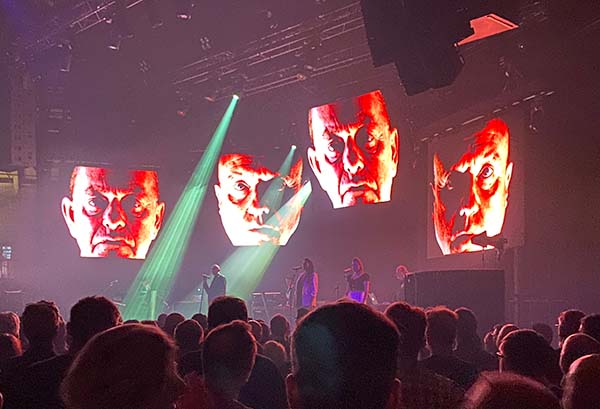 Adwaith, The Piece Hall, Halifax, 10 September – The Piece Hall was an incredible venue and so well organised – there were stewards supervising the queues at the bars, food stalls, toilets etc, it was a brilliant gig. From listening to a couple of tracks in advance I was expecting Adwaith to be quite indie-pop but actually there was more of a swamp-prog swagger to them. I’m still yet to hear a Welsh-language band I don’t like.

Low Hummer, The Piece Hall, Halifax, 10 September – One of my main motivations of going to Halifax for this gig was to see the Anchoress but she had to pull out due to Covid shielding. Low Hummer were a late replacement and an altogether different vibe which I enjoyed, good interplay between the somewhat frenetic male vocals and the woman who sang.

Sea Power, The Piece Hall, Halifax, 10 September – A band I’ve seen and enjoyed live at multiple festivals but – with the exception of From the Sea to the Land Beyond – I’ve never felt particularly inclined to listen to their records. I like what they do though. 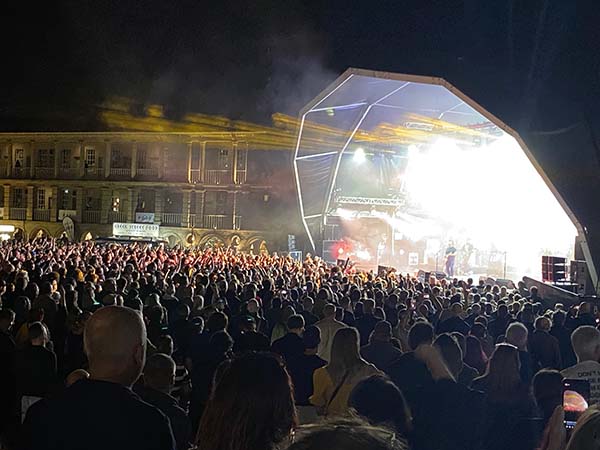 Manic Street Preachers at The Piece Hall in Halifax

t l k, Plugged @ The Real Al Company and Taproom, Walthamstow, 11 September – She introduced her material as “an ode to lucid dreams” and it certainly had a dreamy ethereal quality to it, she sang treated and echoed vocals over the top of an ambient soundscape that then occasionally featured beats. To this old man it reminded him a bit of Liz Fraser with Massive Attack. 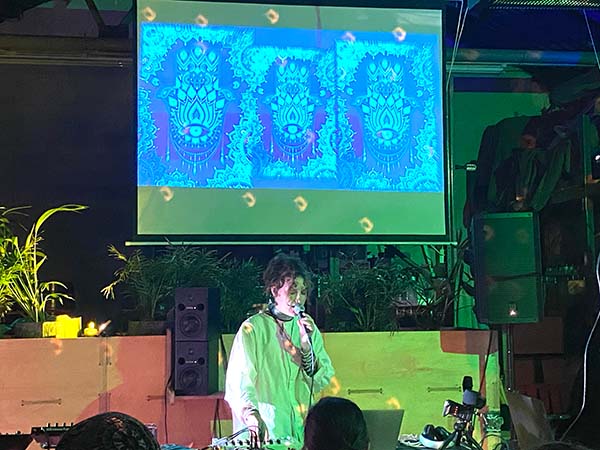 Blue Loop, Plugged @ The Real Al Company and Taproom, Walthamstow, 11 September – Blue Loop cited Tangerine Dream and Vangelis among her influences and the first twenty minutes or so I saw was some very lovely carefully crafted soundscapes but then I had to go home because I am OLD and TIRED and had got a train down to London from Halifax at the crack of dawn. 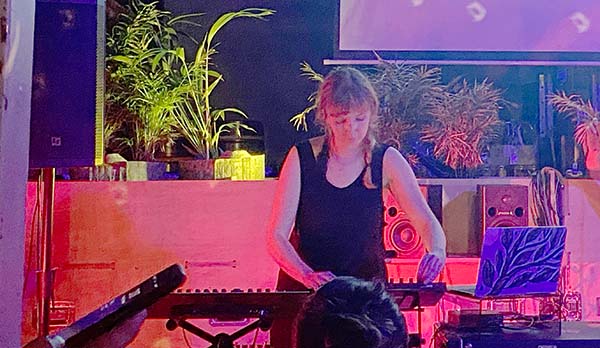 Blue Loop at Plugged in Walthamstow

Witch of the East, HRH Goth Festival, Kentish Town, 12 September – “Thank you. We are Witch of the East. Hail Satan!” – the first words spoken from the stage at HRH Goth and we were very much not in Kansas anymore. Started with an acoustic 12-string and a gong and I thought it was gonna go all Led-Zep-singing-about-hobbits but then they absolutely rocked out.

Deadfilmstar, HRH Goth Festival, Kentish Town, 12 September – Line of the day from the stage: “All you people sitting down at the back there. You’ve had two years sitting on your arses, get down the front”. Included an unexpected cover version of Suede’s Filmstar. 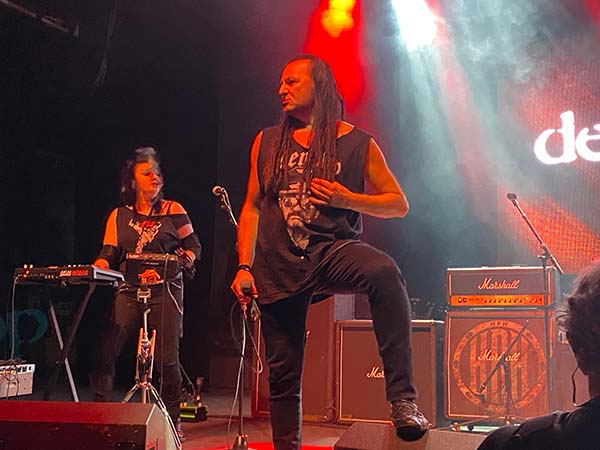 Drownd, HRH Goth Festival, Kentish Town, 12 September – I was keen to see this lot cos they have a track Sinner remixed by Kanga which I am very into, and they didn’t disappoint, visually the most impressive look as well I thought on the day. 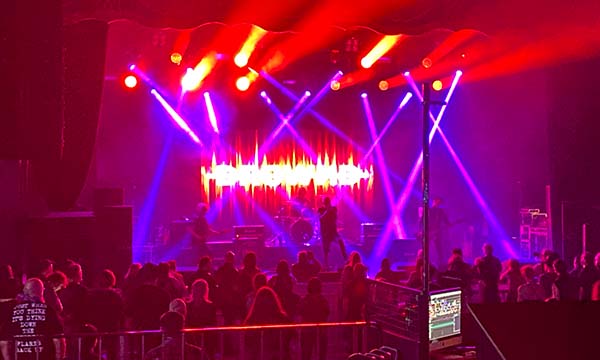 The Webb, HRH Goth Festival, Kentish Town, 12 September – They littered the stage with Halloween decorations and then sang about Alice In Wonderland while twirling a black lace umbrella so it was all very ON BRAND for a goth festival. 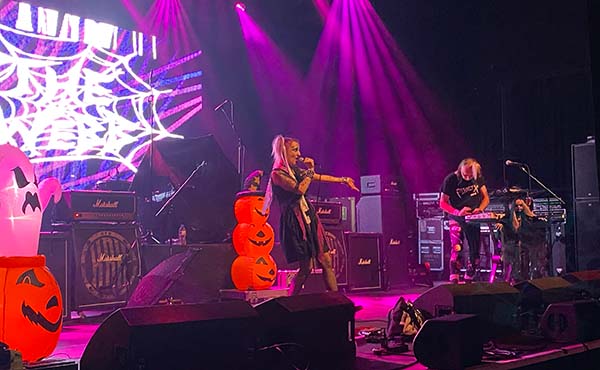 The Webb at HRH Goth

Red Sun Revival, HRH Goth Festival, Kentish Town, 12 September – Decent enough stuff, always good to see a fiend* with a violin as part of a band. [*She wasn’t a remotely a fiend. It’s just a The Fall pun I’ve now had to explain. This is going well.]

Jayce Lewis, HRH Goth Festival, Kentish Town, 12 September – I’ve seen Jayce Lewis before supporting Gary Numan, and his sound is very modern Numan/NIN adjacent except without me having built up decades of affection for it.

Fields of the Nephilim, HRH Goth Festival, Kentish Town, 12 September – I can’t have seen the Nephilim for over thirty years and peering through the gloom to be honest I’m none the wiser if it was actually them, but they played a set dominated by the first three albums which was all you could have asked for.

Fields of the Nephilim, probably

Jennifer Denitto Band, Amersham Arms, New Cross, 18 September – An absolute pleasure to see Jen and friends up on stage playing some of her newer songs, and also paying tribute to some of her former music projects. 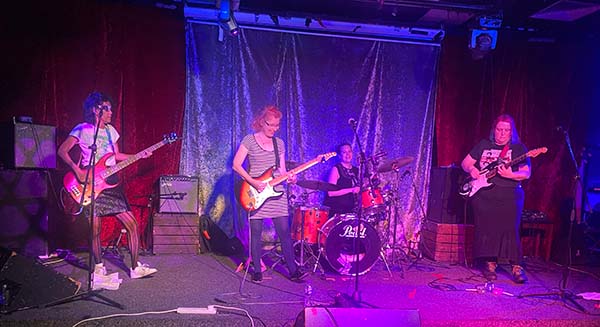 The Monochrome Set, Amersham Arms, New Cross, 18 September – I’ve never knowingly heard any of their stuff but have been curious for years because I have a friend who is a massive fan, so seeing as Jen was playing it seemed churlish not to stay for the main act who … sounded pretty much as I guessed they would? Complex thoughtful songs like a C86 version of Love.

m-orchestra, New River Studios, Manor House, 25 September – I always seem to be at this guy’s gigs. 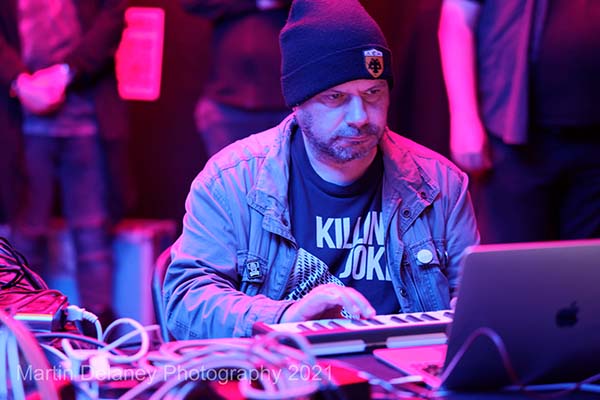 Pillars of Golden Misery, New River Studios, Manor House, 25 September – Like the atonal segment at the beginning of Human League’s version of You’ve Lost The Loving Feelin’ time-stretched for thirty minutes with extra distortion and drones. I loved it. He also used a small webcam as part of his set-up, thus making the audience an unwitting part of the a/v performance too. 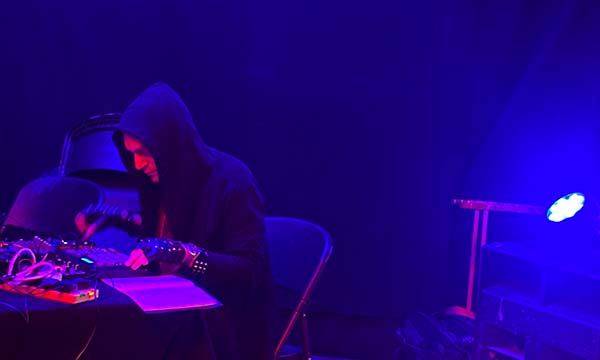 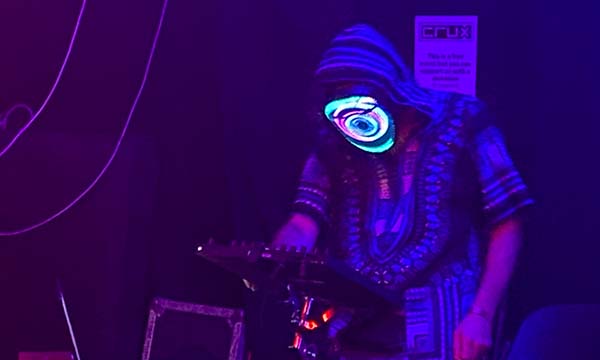 Justin Paton, New River Studios, Manor House, 25 September – Fantastic acid-tinged techno set which really got the room going and was the best thing on the night for me. I was very envious of his set-up until he had to start packing it all up and carry it home. There was a lot. 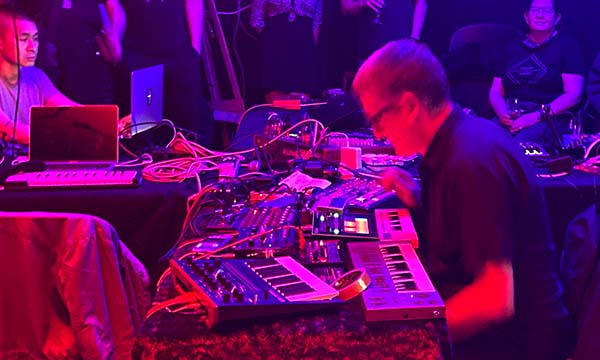 CSV, New River Studios, Manor House, 25 September – CSV finished off the night with a downtempo set, another really interesting gear/visual set-up, and it was a great send-off to the night. Then, somewhat annoyingly, we’d finished at approximately the same time as the Joshua fight at Tottenham Stadium, so I then had to walk home from Tottenham to Walthamstow with all my gear through a crowd of 67,000 disgruntled pissed-up lads because the buses/tubes were completely b0rked.

Barry Adamson, Trades Hall, Walthamstow, 30 September – Barry was doing a Q&A about his new book, which sounded so fascinating I ended up purchasing a copy and getting it signed – and there is photographic evidence of me smiling and everything. After the Q&A he did a short four song solo set of mostly recent/new material, plus classic Jazz Devil. Lovely stuff. 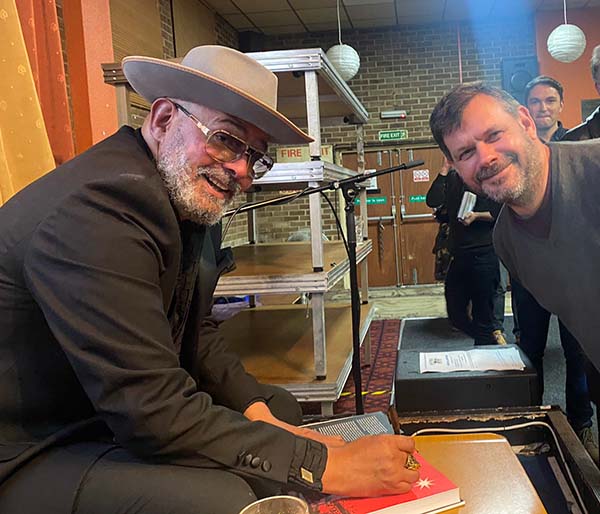 Barry Adamson and yours truly.

by Martin Belam, October 4, 2021
I do live blogging, news stories and quizzes at the Guardian, and help cover Eurovision and Doctor Who for them too. As a journalist and designer I’ve spent over twenty years building digital products for the likes of Sony, Guardian, BBC, Natural History Museum and Reach. You can contact me at martin.belam@theguardian.com. Sign up to get my blog posts sent to you via email.
← UsVsTh3m features in ‘Formats unpacked’
A one-line review of every Sparks studio album because I listened to them all during #Sparkstember →