Nobody has asked for this. It is more for my benefit than yours. It’s a (usually) monthly series. I’ve marked LPs that I’d never heard the whole way through before with a brand new NEW SPARKLES! icon due to weird email template issues with emojis. The links (mostly) go to the album on Spotify. I do a lot less of these now there are gigs and football to go to again.

She Drew The Gun Behave Myself – I only really know their total banger Something For The Pain, and this was all a bit more electronic than that, well more electronic than I expected and not enough twang guitar IMHO, although I have subsequently become addicted to the single Panopticon.

The Fall Room To Live [The Mighty Fall Facebook group host synchronised listenings at 10pm on Tuesdays] – If you add the extra two tracks at the end from the German vinyl issue as later replicated on CD – Fantastic Life and Lie Dream of Casino Soul – then this album is eight total bangers plus Papal Visit. An absolute distillation of Das Grüppe and their powers.

Spector Now or Whenever – I could see where people would like this, but it felt lyrically not aimed at me so I struggled a bit to engage. It’s all very well writing songs about meeting some young hottie at a wedding, but the next wedding I’m likely to be invited to will be people twenty-five years my junior getting married or my peers embarking on a second round of failed marriages. Funny Way Of Showing It was my favourite track though, I’m always a sucker for a bit of phase/flange on the vocals.

The Fall Interim [The Mighty Fall Facebook group host synchronised listenings at 10pm on Tuesdays] – I know, I know, you don’t often get the NEW SPARKLES! icon next to a The Fall album in these round-ups but Interim is an album “compiled from live and studio material realeased in 2004” that I’d never listened to before and am unlikely to listen to again. Stuff you know! But not played or recorded very well!

In fairness, I think when it came out some of the tracks were new or had only been played live before. The early version of Green-Eyed Loco Man was good, but, hey, you know, it’s Blindness, but unfinished and someone randomly on the bagpipes or whatever in the background. On a take-it-or-leave-it basis, this is a The Fall album I would leave.

Cherry Ghost Thirst for Romance – On paper this should have been my kind of thing but it didn’t do it for me at all. At all.

Bicep Isles – I got very over-excited by the first couple of tracks and tweeted that I was really, really into this, but then it became a bit too predictable and samey and not abrasive enough for me and I drifted away.

Meat Loaf Bat Out of Hell – It was only on the day of this party, following Meat Loaf’s death, that I realised the album was produced by Todd Rundgren (who I mostly know through his work with Halfnelson/Sparks) not Jim Steinman. Obviously over the years I’ve heard the album – and especially the singles from it – countless times. I feel like as ever my main takeaway is that loads of things that were entirely delimited separate genres in the 1970s – hard rock, prog, pop, punk etc – AND PEOPLE REALY CARED ABOUT THAT – actually all just sound quite similar 40/50 years later.

Déjà Vega Personal Hell – This had me totally hooked after thirty seconds – incredible noise and energy about the three of them. I got super-excited because they were playing live in London a few days later but then I realised I had a schedule clash so it was a no-can-do, but I definitely want to catch them live ASAP. Frenetic energetic new psych-rock-wig-out stuff. I was dancing around the kitchen like a weirdo.

The Fall Extricate [The Mighty Fall Facebook group host synchronised listenings at 10pm on Tuesdays] – You can almost date this album to the precise second it was released due to the gated reverb drum sound, but it is one where aside from Telephone Thing and The Littlest Rebel MES’ performance lacks a certain bite. I played it loads at the time, as I worked in a record shop when it was out and it was fab that they were on a bigger label and seemingly had a promotional push behind, but it feels all a bit slight in retrospect.

Jamie T. Panic Prevention – This passed me by entirely at the time, I think it came out when I was living in Greece or Austria? For me it veered wildly between “Ooooh I like this cracking sounding indie song” and “Ooooh I hate faux-matey English ‘I was dahn the booozer with the boys and got into a scrap with some big cunt’ story-telling rap”.

Blur Blur – I joined this party a bit late while drunk on a train from Cambridge to London after a gig and it was great. I think in a way Beetlebum and Song 2 overshadow the rest of the album in popular memory but it is banger after banger and I had to add Strange News From Another Star to my list of songs that would make me burst into tears if I ever saw it again live and I couldn’t quite tell you why. I love Death Of A Party as well, should have been a single, I think I used to have a promo CD of it with some Adrian Sherwood remixes on it so they must have been thinking about it *whispers* it really suddenly tails off with Movin’ On and Essex Dogs.

Betty Davis They Say I’m Different – I’ve given this the NEW SPARKLES! although given the outpouring of grief I assume I must have heard it played by some of the soul/funk people at Reckless Records back in the day, but it didn’t ring any bells. Obviously it is fantastic, isn’t it – what a character in her voice and clearly getting the best out of that band. Also I gave a hollow laugh about every essay I’ve ever read about how finally women can sing about their sexuality these days because Madonna showed her bra once in 1985 etc etc

Sea Power Everything Was Forever – A band who I have always enjoyed when I see them live – last time was supporting the Manics in Halifax as reviewed here in another blog post you don’t care about – but never really got into their records although I adore the DVD of From the Sea to the Land Beyond. Anyway this album sounded fabulous, from a very slight low-key opening to other tracks that broke out the electronics box and then rocked, I really, really enjoyed it, great tunes and great production.

White Lies As I Try Not To Fall Apart – I was a big fan of the first album and then kind of drifted away. Went to see them on a whim when they were touring it for the 10th anniversary and was absolutely blown away by the atmosphere and fanaticism of the crowd so got reacquainted with all the LPs. I think the two lead singles off this have both been great and this lyric …

But oh, God
I don’t want to go to Mars
What kind of brainwashed idiot does?
It’s all a lab-rat life in jars
They branded the dream of ages

… is one for the ages. I was especially impressed that they attempted to goad Elon Musk during the #TimsTwitterListeningParty itself. The album is good, but maybe doesn’t have anything else quite as strong I Don’t Want To Go To Mars and Am I Really Going To Die on it. It has a very 80’s bass-driven funky pop-synth sheen to it though, like Force-era ACR or – dare I say it – that brief couple of minutes when Curiosity Killed The Cat were making decent records? Is that a weird comparison?

Mark Lanegan Whiskey For The Holy Ghost – What a loss. I actually came on board the Lanegan-train later in the 90s so this was always one of his “old” albums to me, has some great tunes like Carnival, Riding The Nightingale and Sunrise which I used to have on my commuting MiniDisc compilation of his stuff. Lovely album, much more acoustic impressionistic song-writing at times than his later rockier more direct solo stuff. 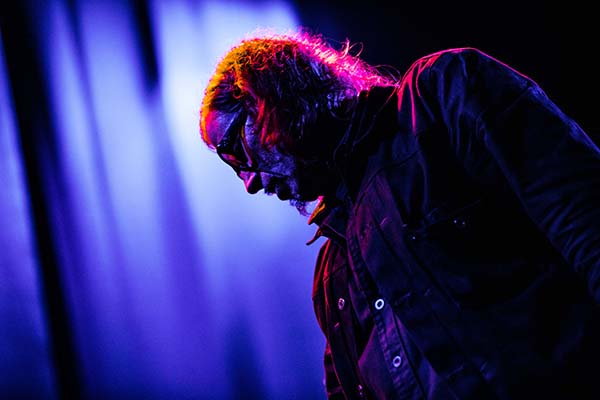 by Martin Belam, March 1, 2022
I do live blogging, news stories and quizzes at the Guardian, and help cover Eurovision and Doctor Who for them too. As a journalist and designer I’ve spent over twenty years building digital products for the likes of Sony, Guardian, BBC, Natural History Museum and Reach. You can contact me at martin.belam@theguardian.com. Sign up to get my blog posts sent to you via email.
← Friday Reading S13E07
A one-line review of every gig I’ve been to in February 2022 →