Prima Queen, 100 Club, London, 2 February – That had some great little songs, a bit like an all-woman Turin Brakes at times, a bit like an all-woman poppy Kiss Me Kiss Me Kiss Me-era Cure at others. Near the end they played single Chew My Cheeks which I’m a big fan of not least because they seem to have filmed the video on the DLR and the London Dangleway and all the weird transport things I used to enjoy doing when I worked at Canary Wharf. 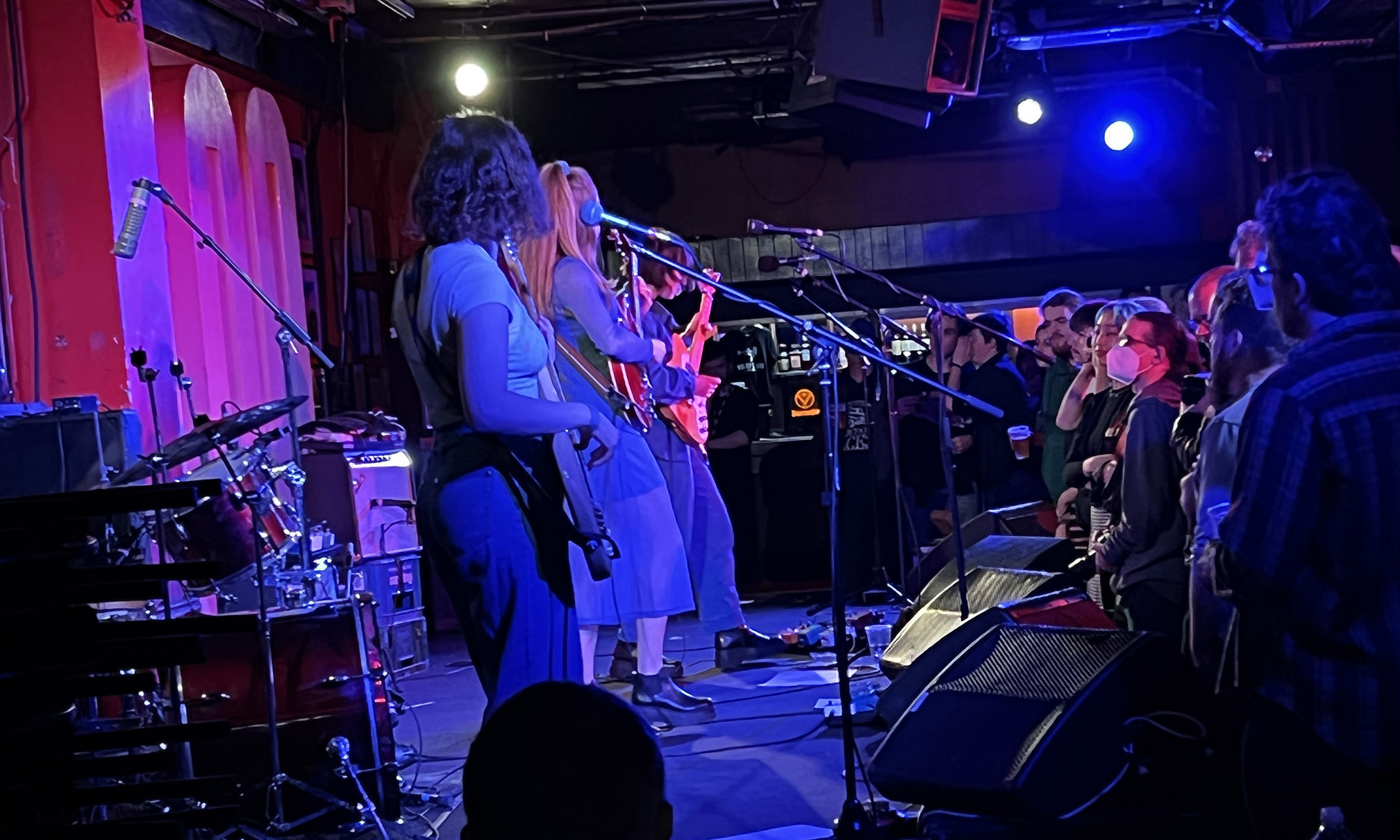 Prima Queen at the 100 Club

Wet Leg, 100 Club, London, 2 February – The hottest ticket in town for 6Music enthusiasts of a certain vintage, they made me blush by doing that Wet Dream song, and dispelled any idea they might be two-hit wonders with a set that bristled with potential future singles. 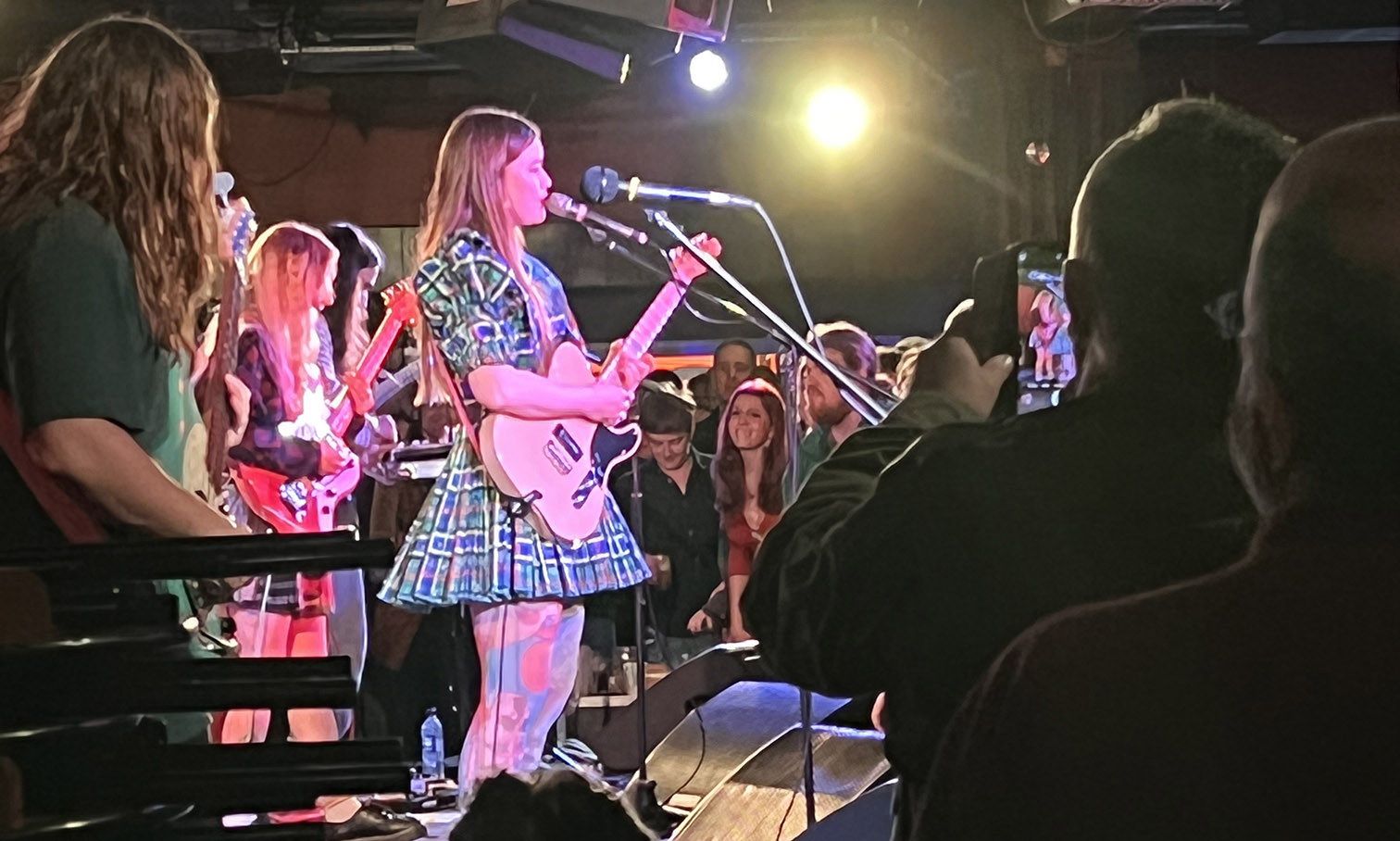 They also managed to quieten a rowdy and enthusiastic crowd with a ballad in the middle. Great infectious fun with a dash of early Talking Heads and early Blur but even though I’d bought along a pack of warm beer, they didn’t invite me backstage after the show etc etc 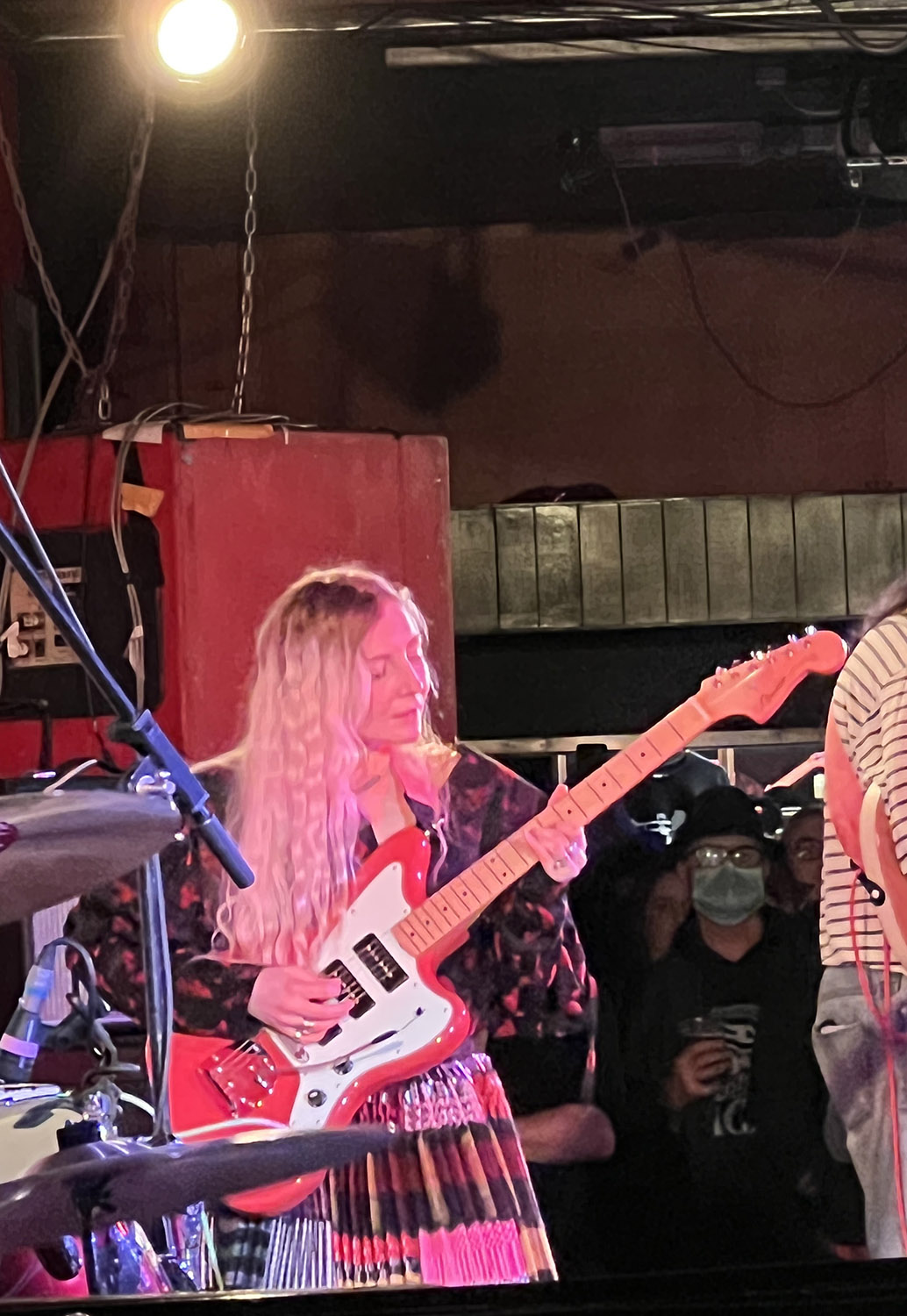 The Membranes, Assembly Hall, Islington, 5 February – I don’t really know their stuff but I’ve seen them in support slots before and it always makes for a decent half hour. John Robb is a very charismatic frontman, and I always forget that they have a woman on the keyboards who seems dressed-up as Cousin It except it is all veils and flowers rather than hair. 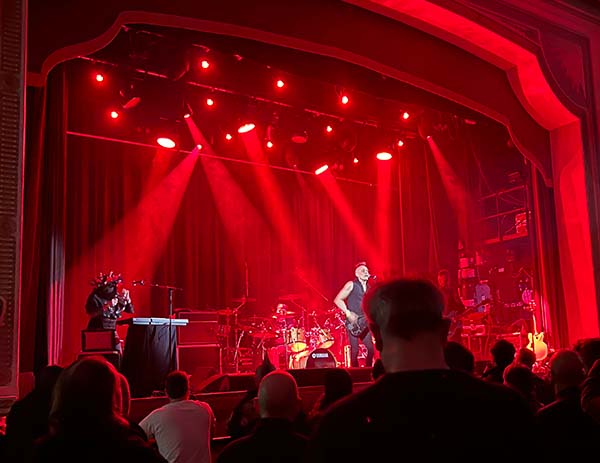 The Membranes at Islington Assembly Hall

The Chameleons, Assembly Hall, Islington, 5 February – Likewise, I don’t really know the Chameleons stuff except what I would have picked up by osmosis from goth clubs and the Annie Nightingale’s Request Show on Radio 1 back in the day, but there was a #TimsTwitterListeningParty for one of their albums and I really enjoyed it and thought “Well, how bad can an evening listening to stuff that sounds like the Chameleons be, even if you don’t know it?” and the answer was it was very good indeed. They were excellent live. 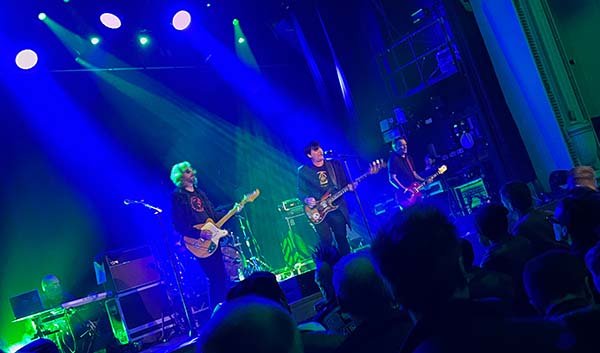 The Chameleons at Islington Assembly Hall

Echo & The Bunnymen, The Roundhouse, Camden, 7 February – This was a similar sort of thing. I never had any of the Bunnymen LPs except that first singles CD, but enjoyed the recent #TimsTwitterListeningParty series and saw Will Sergeant do a great talk in Walthamstow about his book, so as it was an anniversary tour thought I would give it a bash – and it didn’t really do it for me. A little bit too much of meandering into cover versions of Roadhouse Blues and Walk on the Wild Side for my liking. Oddly enough Over The Wall was my favourite on the night, depite it not having charted and not being included on Songs To Learn And Sing. 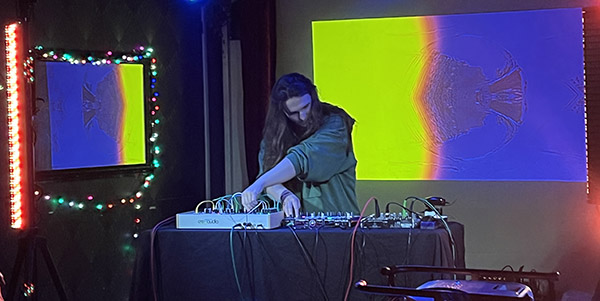 Rayne Gel, The Blue Moon, Cambridge, 10 February – This was a night of DAW-less electronica so everyone had to bring their hardware out. The first act was a slightly acid-tinged techno thing which really got the crowd going, was quite dark and brittle and gloomy in places, very much my bag. 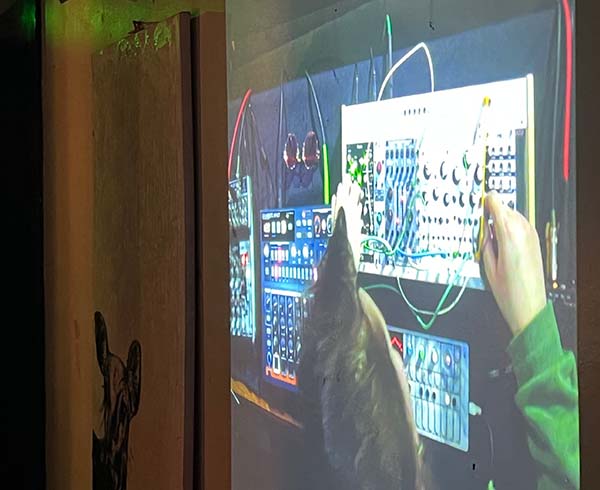 An overhead view of Rayne Gel at the Blue Moon, Cambridge

D-Lings, The Blue Moon, Cambridge, 10 February – I enjoyed this although for me it was slightly more in the major key up-beat house sort of area than the grimy misery I prefer. Absolutely great night though.

Desperate Journalist, Lafayette, Kings Cross, 19 February – Criminally under-rated and brilliant as ever, this was a bit of a flying visit as I was right at the end of my work-every-day-of-the-Winter-Olympics shtick, so missed the support band and skipped home early before the encore, but all the stuff off the new album sounds great live, especially Everything You Wanted 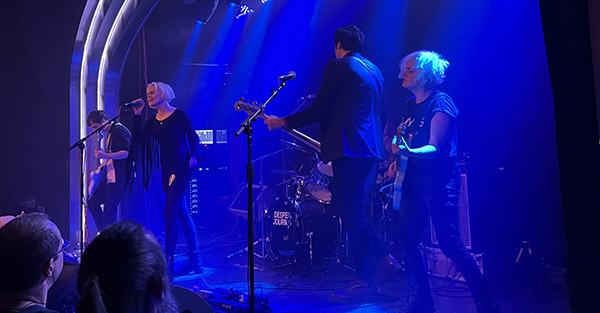 Atlantisphere, The Blue Moon, Cambridge, 22 February – This was playing when I arrived, really satisfying techno sounds, knew it was going to be another night of good stuff in Cambridge. 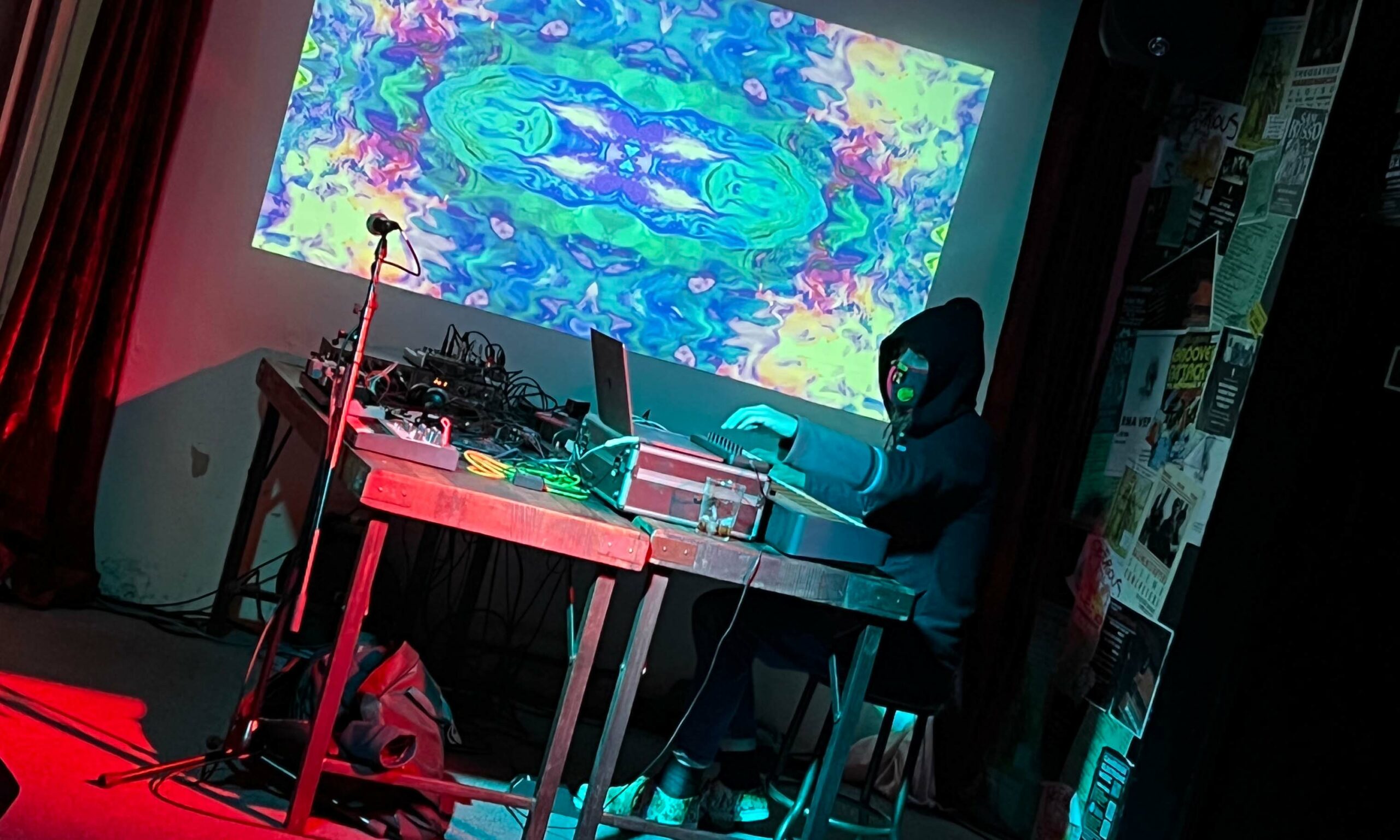 Atlantisphere at The Blue Moon, Cambridge

Under The Sun, The Blue Moon, Cambridge, 22 February – I really enjoyed this rather distorted shoe-gazey approach to electronic music. 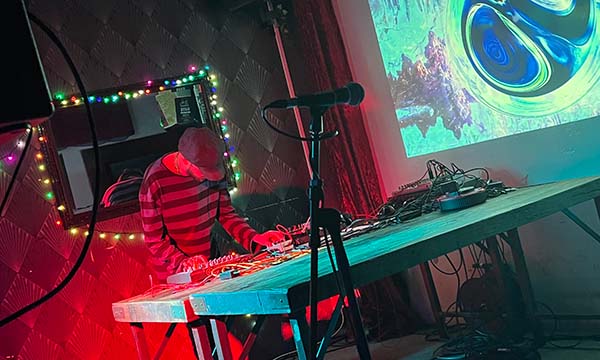 Under The Sun at The Blue Moon, Cambridge

Qubik, The Blue Moon, Cambridge, 22 February – I’ve met this guy a couple of times at events and it was great to see him getting up to do some stuff live. 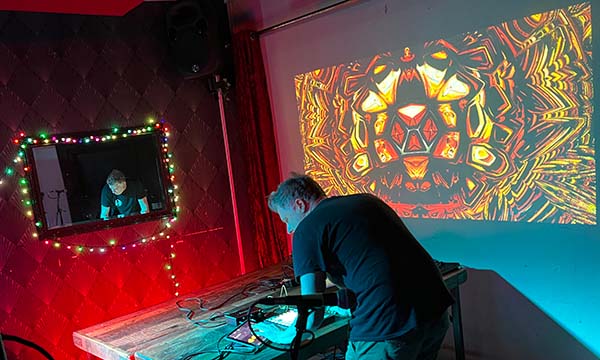 Qubik at The Blue Moon, Cambridge

Hardwired, The Blue Moon, Cambridge, 22 February – Barry Brosnihan has been a vital part of the EMOM scene during lockdown helping host Virtual-EMOM nights on Twitch and he runs his own event in Norwich which I hope to get to play at some point, it was lovely to bump into him and he did a great set too, he uses a little box which I was very intrigued by to the extent that I clearly didn’t have time to take a photo.

Morph, The Blue Moon, Cambridge, 22 February – This would have been at home at the DAW-less event at the same venue earlier in the month as he had four hefty bits of kit linked up which I was quite envious of. I say that, I’m very happy my rig is ridiculously portable, but also I just have inevitable hardware/gear envy. 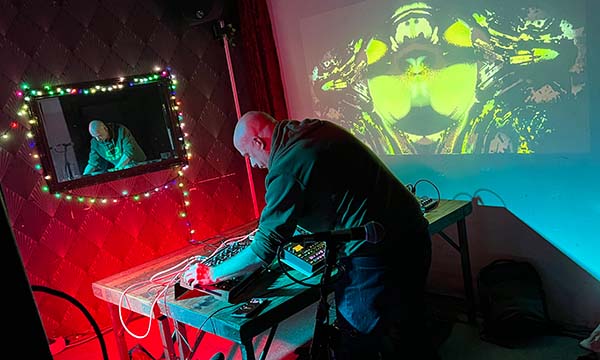 Morph at The Blue Moon, Cambridge

Jack’s Laptop, The Blue Moon, Cambridge, 22 February – Quite a contrast to the rest of the night it was heavy rock guitar over a laptop rock backing track. 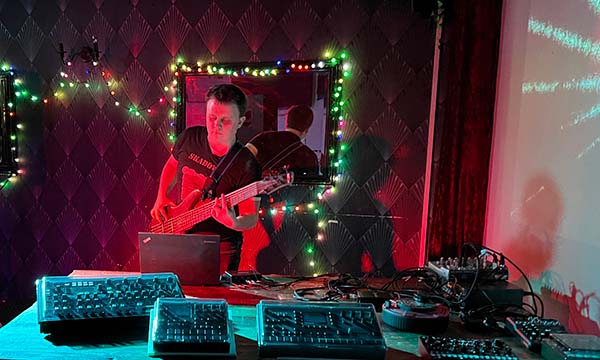 m-orchestra, The Blue Moon, Cambridge, 22 February – A debut for new track All Unplugged But Still Humming, I was very pleased with this performance and the reception and there is even photographic evidence of me smiling. 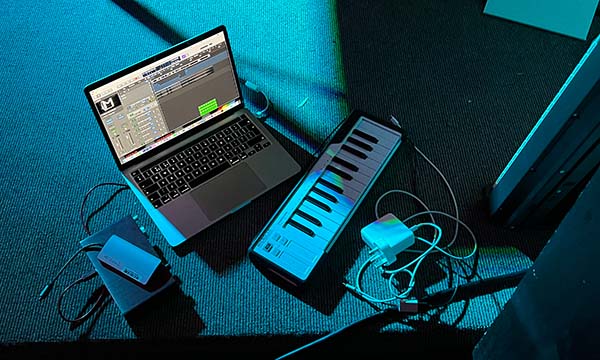 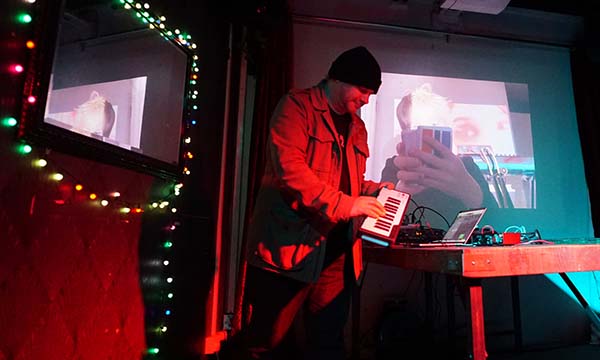 D-Lings and Spadehead, The Blue Moon, Cambridge, 22 February – I saw D-Lings earlier in the month at the same venue, but this was in partnership with Spadehead and they seemed to be having great fun, it looked like it had a lot of improvisation. 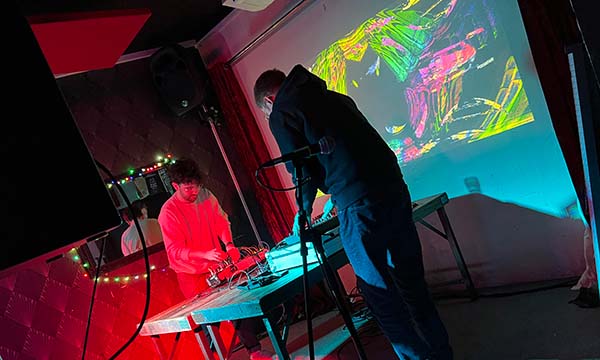 The Electra Woods, It’s Her Factory, Walthamstow Trades Hall, 24 February – The definite article, you might say. This was great, she plays quite sine-tonal slow electronica and sings mournfully over the top, sometimes with a voice adapter, sometimes over a chorus of reversed processed versions of herself. 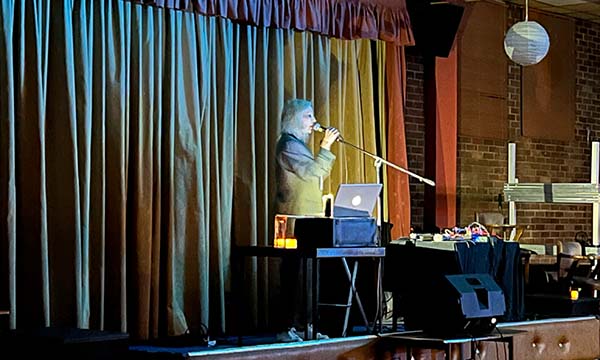 The Electra Woods at It’s Her Factory, Walthamstow Trades Hall

Cleaver Boi & The Hungry Ghost, It’s Her Factory, Walthamstow Trades Hall, 24 February – I’m entirely unsure how to review this. It was three women dressed up like extras from something like the cult scenes in The Masque of Mandragora, and first they did a ritual-type thing with a cymbal and shaker and bells and then they breathed, screeched, giggled into microphones fed through loads of effect pedals and there wasn’t really a tune as such. Decidedly the only thing I’ve seen like this in February, that’s for sure. 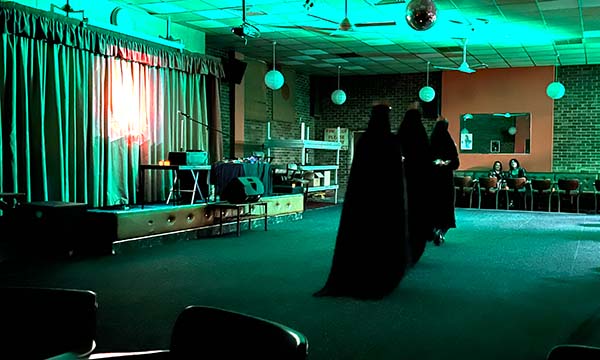 Bit Cloudy, Walthamstow Trades Hall, London, 25 February – I was supposed to be seeing him in April in a support slot with Dohnavùr, so was pleased to catch him here, dreamy spaced-out electronica.

by Martin Belam, March 2, 2022
I do live blogging, news stories and quizzes at the Guardian, and help cover Eurovision and Doctor Who for them too. As a journalist and designer I’ve spent over twenty years building digital products for the likes of Sony, Guardian, BBC, Natural History Museum and Reach. You can contact me at martin.belam@theguardian.com. Sign up to get my blog posts sent to you via email.
← A one-line review of every #TimsTwitterListeningParty I joined December 2021–February 2022
Friday Reading S13E08 →