AJ Hellenbach, The Rumsey Wells, Norwich, 4 August – Specialisising in mash-ups we got a great take on Jeff Wayne’s War of the Worlds if it existed in the Knight Rider multiverse, and my first Running Up That Hill techno mix of the post-Stranger Things hot Kate Bush summer. 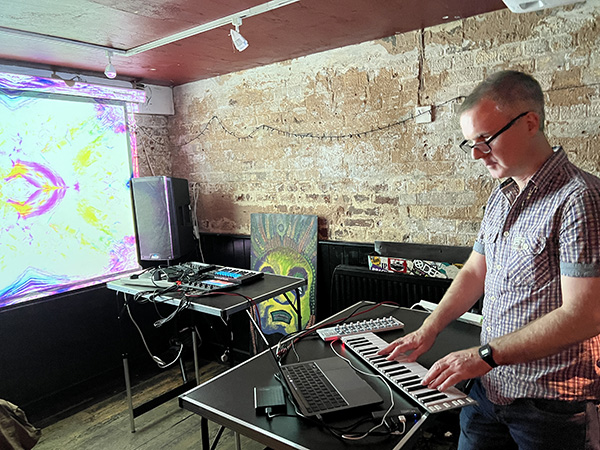 HardWired, The Rumsey Wells, Norwich, 4 August – Barry did a lovely job organising the evening and delivered twenty minutes of melodic and pad-driven sounds. 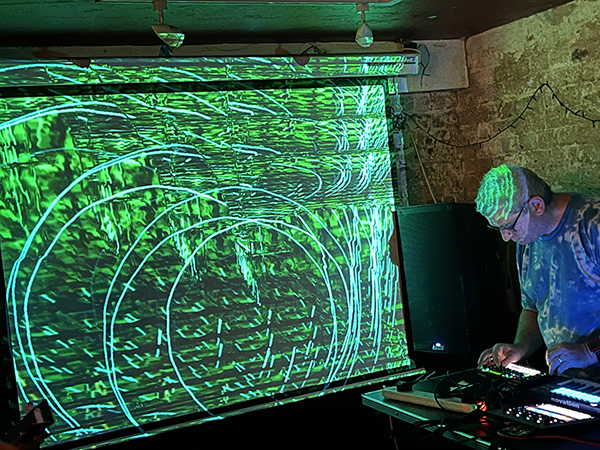 HardWired at The Rumsey Wells

Robin Vincent, The Rumsey Wells, Norwich, 4 August – Robin had this homemade modular lash-up which I assumed was going to produce twenty minutes of off-kilter drones and glitches but actually was surprisingly upbeat and banging. 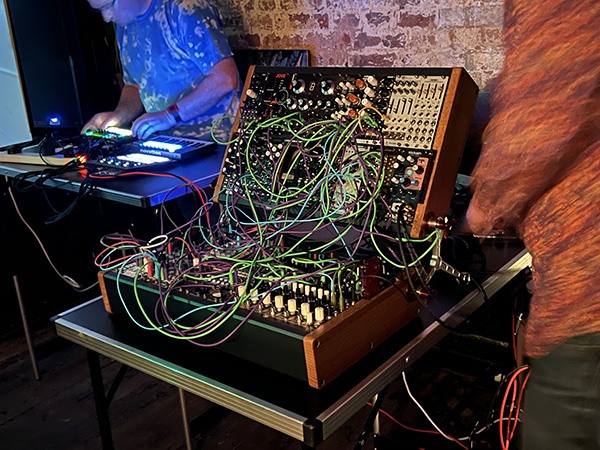 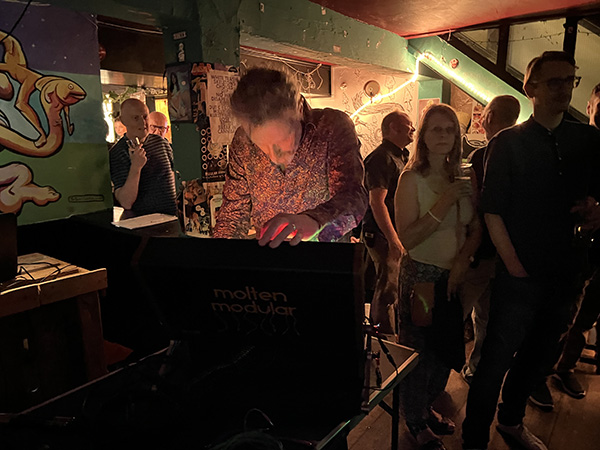 m-orchestra, The Rumsey Wells, Norwich, 4 August – I was very happy with my set on the night – there is a video clip of it knocking around on Facebook.

Abominable, The Rumsey Wells, Norwich, 4 August – Abominable is a local legend on the scene and stalwart of the virtual EMOMs and delivered a tight set along with a strangely distrubing doll. [See picture] 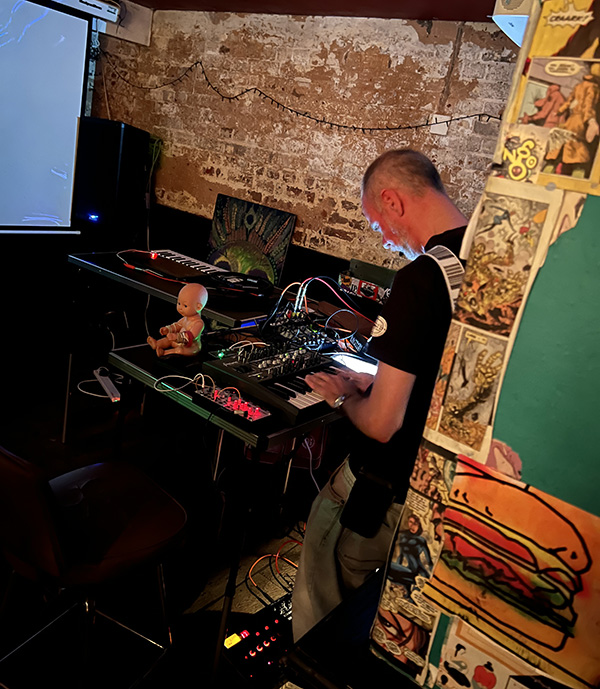 Abominable at The Rumsey Wells, Norwich

Androgyne, The Rumsey Wells, Norwich, 4 August – This was a reprise of AJ Hellenbach but with the addition of two vocalists, highlight being a mash-up of Blue Monday with Olivia Newton-John’s Physical alongside what seem to be some self-penned stuff.

Squarepusher, Field Day, Victoria Park, Hackney, 20 August – Enjoyable 8-bit day-glo visuals but I’ve always filed this under “clever” rather than “it moves me” and nothing changed that from seeing it live. 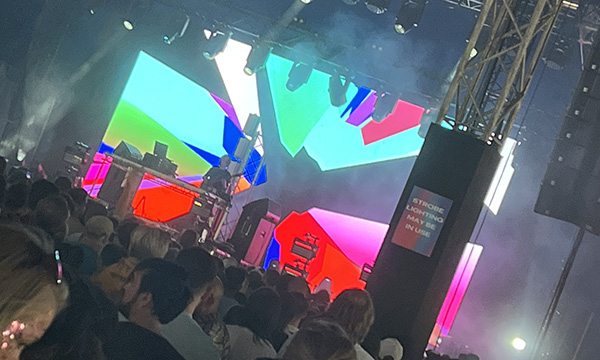 Daniel Avery, Field Day, Victoria Park, Hackney, 20 August – I saw about fifteen minutes of Daniel at last year’s Wide Awake Festival after a weird incident involving security and me being accused of stealing my own bag, which wasn’t a great mindset to watch music, so this was much better. Very enjoyable acid-tinged techno. Yes please.

Kraftwerk, Field Day, Victoria Park, Hackney, 20 August – Still the most fun you can have wearing 3-D glasses. It is the tenth time I’ve seen them in just over three decades, and I’ll never tire of it. Due to festival staging limitations they didn’t have the actual robots with them though and it was a bit of a truncated set, booooooo! If you like any kind of electronic music, it is a must-see show, and I assume at some point they will put it in a museum as a permanent installation. I was right down the front. 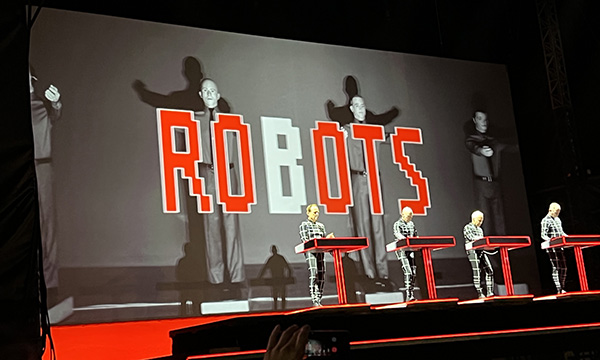 Anna Calvi, All Points East, Victoria Park, Hackney, 28 August – Didn’t know her particularly except for the name, and thought she had something of the David Bowies about her in her stage presence and vocal styling and was quite enjoying it and then she did a long unaccompanied guitar virtuoso solo thing that wasn’t my bag at all. 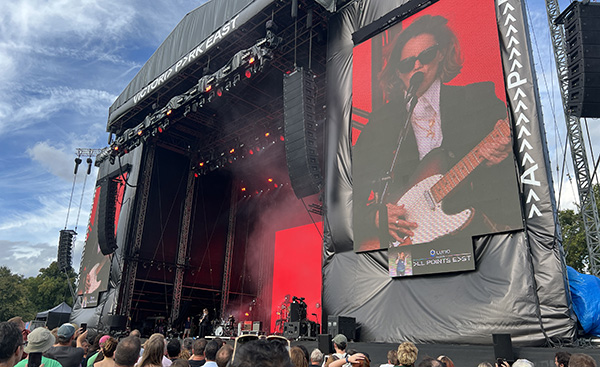 Anna Calvi at All Points East

Aldous Harding, All Points East, Victoria Park, Hackney, 28 August – I was very into the Party and Designer albums and then everything I heard off the new LP left me totally cold so I approached this with some trepidation and wondering how her sound would translate to an outside setting and just like when I’d seen her live before she was absolutely mesmerising. So I vowed to listen to the new LP again afterwards, and still didn’t like it. Funny old world. 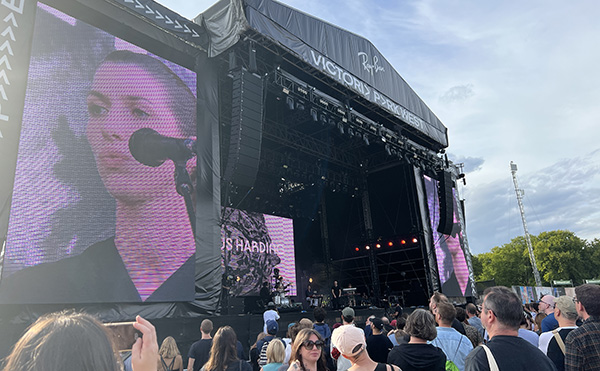 Aldous Harding at All Points East

The Smile, All Points East, Victoria Park, Hackney, 28 August – Odd one this as usually bands do off-shoots because Jagger wants to make a disco album and Richards doesn’t, or Andy Taylor wants to make an album where Nick doesn’t keep turning the guitars down and Simon is insisting on doing his “poetry” over it. But this feels like the main creative axis of Radiohead writing a load of new material and then deciding … not to be Radiohead. I thought they would have extra players to fill out the sound but it was just the three of them being multi-instrumentalists, sometimes swapping around within the same song, and sometimes playing different things at the same time (Jonny at one point was playing piano and a stand-up harp). They were obviously enjoying it, it was brilliant, they had a new song, maybe they will carry on being this band, and I guess I would carry on going to see them. 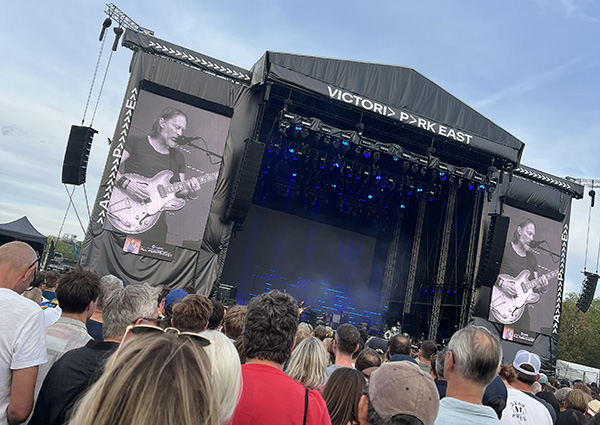 The Smile at All Points East

Nick Cave, All Points East, Victoria Park, Hackney, 28 August – Hadn’t seen him for fifteen years, and had forgotten how great a showman he is. Had to leave early because I am old and tired and I had sobbed too much about his records soundtracking my break-ups, and his son’s death, and the general blissful melancholy joy of the misery of living in a world that promises you salvation and is mostly just grim. 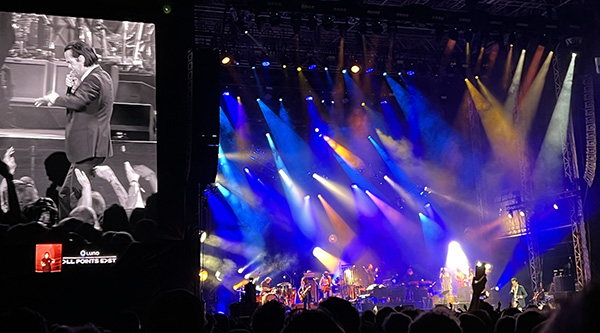 Nick Cave at All Points East

Praise “Him” ’til you’ve gotten what you’re praising “Him” for, then praise “Him” a little bit more …

by Martin Belam, September 2, 2022
I do live blogging, news stories and quizzes at the Guardian, and help cover Eurovision and Doctor Who for them too. As a journalist and designer I’ve spent over twenty years building digital products for the likes of Sony, Guardian, BBC, Natural History Museum and Reach. You can contact me at martin.belam@theguardian.com. Sign up to get my blog posts sent to you via email.
← A one-line review of every gig I’ve been to in July 2022
Thoughts on … finally seeing Tom Bailey playing the whole Into The Gap album live →