[This is the fifth in an occasional series where I ramble at length and without much focus about an old episode of Doctor Who what I have just watched on my tellybox. Lucky, lucky you. Previously: The Invasion, Dragonfire, The Web of Fear and Respond to All Calls]

I made a conscious decision about three decades ago to try and not find out much about the missing Doctor Who stories on the grounds that it would be great if they turned up and I could watch them as new. And then they started animating the missing stories so that I could also watch them as new too even if they hadn’t turned up. It has occasionally worked and now the Evil of the Daleks is one of those occasions.

So, I knew that somehow they have to get to Victorian times, and I knew that Victoria Waterfield was going to join the TARDIS crew as an orphan at the end so that suggested a rum do for any other Waterfields we met along the way, and I remember there being something about a “human factor”, and I’d seen a previous DVD extra of surviving behind-the-scenes footage of the effects shots for a massive intra-Dalek battle at the end of this story, but apart from that, like Power of the Daleks – which I reviewed for the Guardian – this was like watching A BRAND NEW PATRICK TROUGHTON ADVENTURE IN TIME AND SPACE WITH THE DALEKS. \o/ 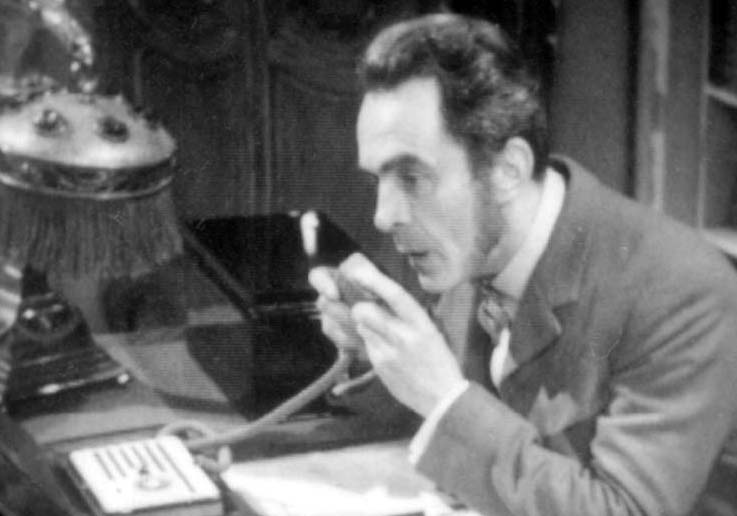 This post will contain spoilers of this story from *checks notes* 1967. But I’d been avoiding them for thirty years so it is only fair to say.

I’ve mentioned before that obviously these animations are a labour of love and of course fans who are going to buy them want every second of the original recreated, but you do sometimes wish they could use a bit more judicious editing creativity and speed them up when they are dragging.

I’m almost certain in a modern TV production the whole of episode one could have been done as a two minute cold open sequence that just consisted of Waterfield asking his henchmen if they had done all he had asked, with brief flashbacks to the Doctor and Jamie chasing the TARDIS on the van, holding the matchsticks with “Tricolore Café/Club/Bar” on them etc, and ending with the Dalek reveal. CRASH ZOOM OPENING TITLES ON WITH THE SHOW.

Having said that ZOMG WOW the last couple of episodes of this are absolutely brilliant, and especially once we are on Skaro the animation absolutely shines. The original studio designs of sharp isometric lines all over the shop were meant to give the Dalek city much more space than the way it had appeared in earlier serials. 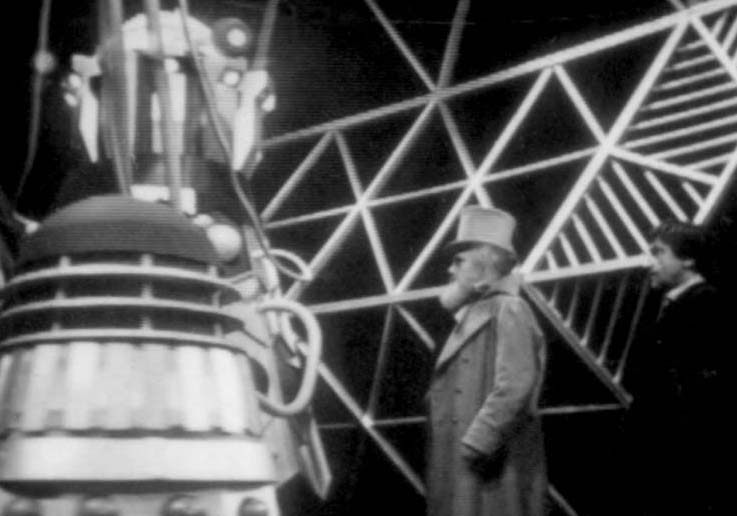 Maxtable and the Doctor in the Dalek’s isometric grid city

But that of course just means it is so effective as an animation, and you don’t have the problem of Daleks trying to emulate human movement which can show up limitations. I definitely recommend you get this as it is easily the best Dalek cartoon there has ever been. 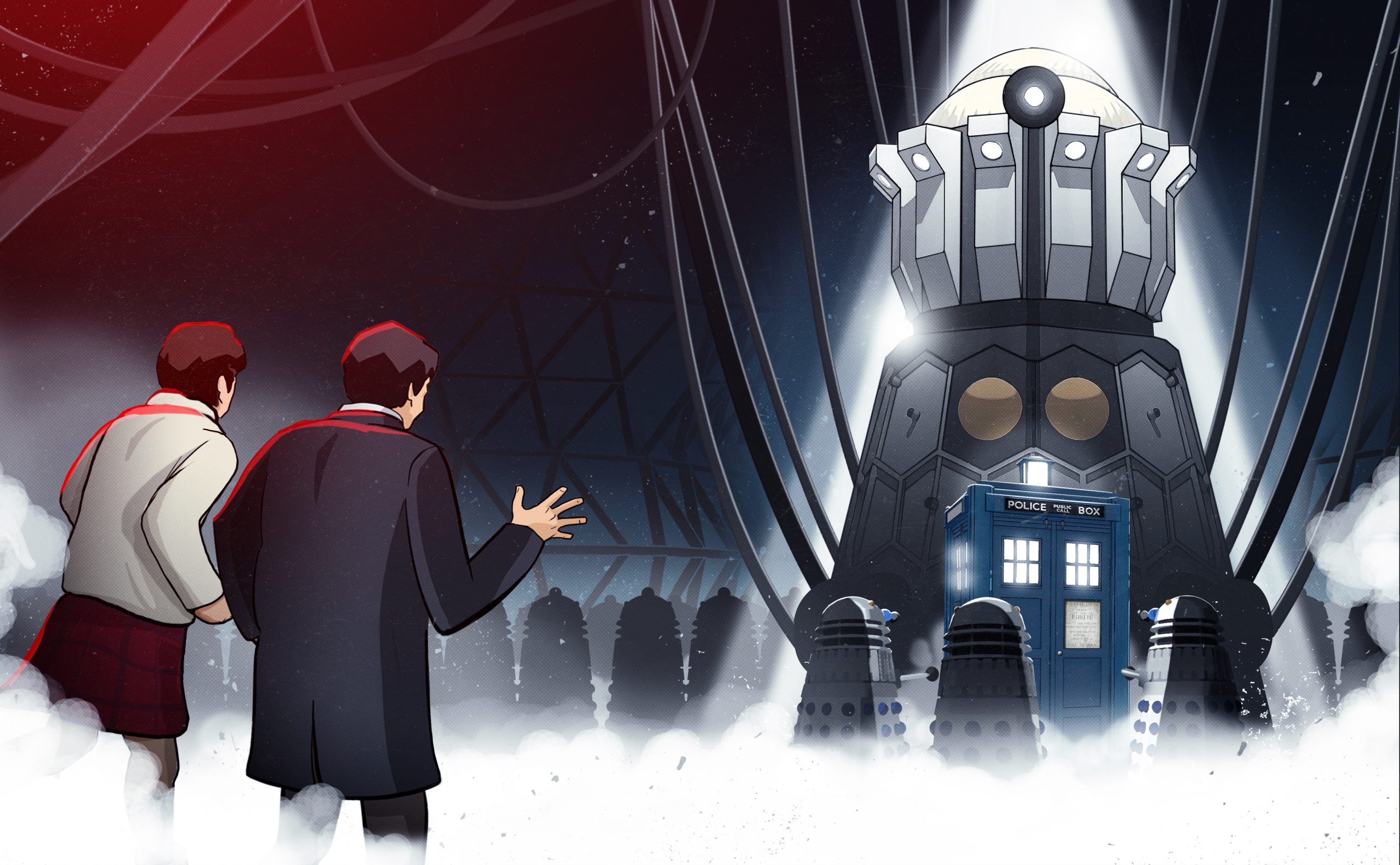 The animated lair of the Daleks.

AVERT YOUR EYES NOW, JOYLESS NOT MY DOCTOR TYPES WHO THINK “THE TIMELESS CHILD” STORYLINE IS AN UNFORGIVABLE RETCON AND BETRAYAL ETC ETC. It is interesting that when the Doctor offers himself up as the test subject, the Daleks reject him not because he is a Time Lord, but because he has travelled so much in space and time that he has become “more than human”. 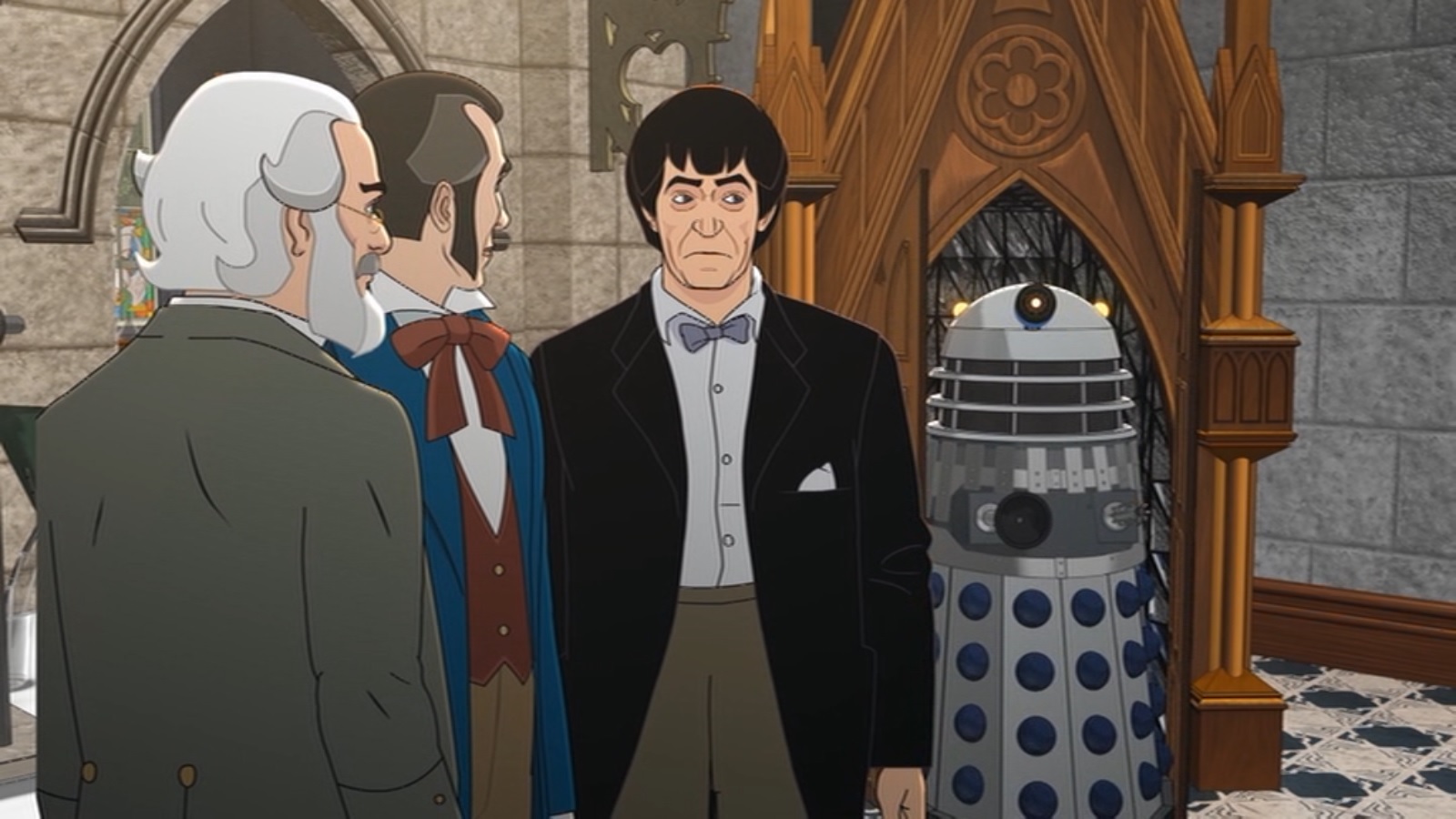 The Doctor in the laboratory.

It is possible, as a working in-universe explanation, that at this point the Daleks are unaware of the existence of the Time Lords and the Second Doctor doesn’t demur on this point to keep it that way. In William Hartnell story The Chase, for example, the Daleks refer to the TARDIS at one point as “the Earth time machine”.

Troughton does later say – in yet another slap in the face to Sarah Jane “Sure leave me in Aberdeen, I understand I am not allowed on Gallifrey” Smith – that he might take Victoria to his own planet, because he doesn’t come from Earth, but again if you look at what is scripted Troughton does not categorically say that he is not a human. Perhaps he knew he was half-human on his mother’s side. Anyway, basically the Timeless Child is much less of a contradiction of all this than suddenly adding the Time Lords was in the War Games, that’s all I’m saying.

I read Sathnam Sanghera’s Empireland earlier this year which has allowed me to profoundly sharpen my perspective on how colonialism and empire shaped a lot of British thinking and popular culture without people realising it, and I think the Evil of the Daleks is a classic example of that. Kemel, played by Sonny Caldinez, is the only character in the story who isn’t white, and he is a mute strongman. This trope also pretty much happens in Tomb of the Cybermen and Terror of the Autons. 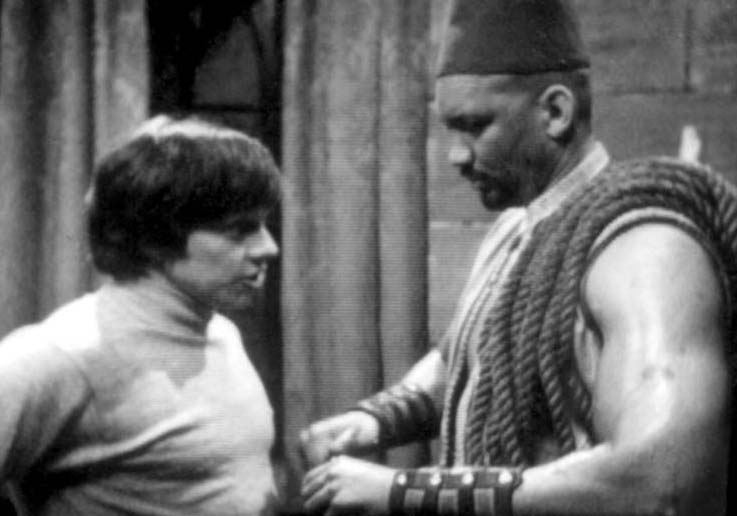 Jamie and Kemel become friends after nearly killing each other.

What I think is interesting now, having read Empireland, is how the Daleks construct their test for “the human factor” along racial colonial lines. They are interested ONLY in recording how the white character – Jamie – is going to outwit and defeat Kemel. They don’t even entertain the possibility that they have anything to learn about “the human factor” from recording Kemel’s actions or that Kemel will be successful. And ultimately Kemel’s character goes on to be another trope – the “noble savage”.

Of course, it is a 1960s bit of fiction featuring Victorian characters, so you would expect it to be a product of its time, but my point here really is how the trope of the strong silent obedient non-British chracter is written into the story in such a way as that’s what the Daleks think too.

I do enjoy the fact that this is Deborah Watling’s first story as Victoria Waterfield, and she spends almost the entire adventure as a prisoner or crying or screaming or being manhandled by ruffians and then at the end of it Watling says “Yes please, Mr Producers, I’d like to do exactly that for my next six stories too, where do I sign?” 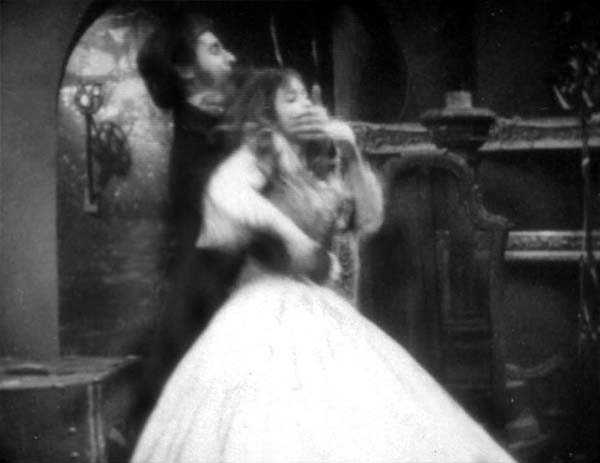 Deborah Watling getting abducted and taken hostage on-screen as Victoria Waterfield for the first of 1,057 occasions in the seven Doctor Who stories she appeared in.

“Do not feed the flying pests!” is a great Dalek line when Victoria is giving her food to the birds at her window, when it is inferred that she is either on hunger strike, or at least has become so depressed in captivity that she is refusing her food. It’s about the only agency her character shows in the whole story.

Episode two survives and when I watched it, it soon became clear that even though I believe it had previously been released on VHS as part of an orphaned Dalek Years set which I had, and is also on the Lost in Time DVD set which I’ve got, I’d definitely, definitely, never seen it. It really WAS brand new Patrick Troughton to me. 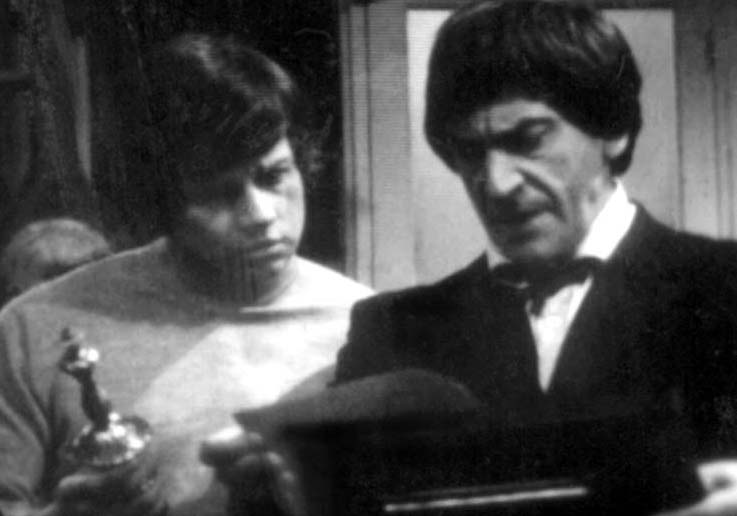 Jamie and the Doctor in the curious antique shop.

Sometimes I think I haven’t seen things, but like with that weird middle episode from Enemy of the World that used to be the only surviving one, as soon as the stuff with the miserabalist cook started up I was like “Oh, I have seen this episode before years ago.”

I didn’t spot any notable easter eggs in the animation for this story, except maybe that the coat of arms in the house belonged to the Whittaker family? I can’t see that in any of the telesnaps, and it isn’t a surname of anybody in the story.

There’s posters on the wall in the background of one sequence, which look to be based quite closely on the posters that were there on the set – although I suspect the animated addition of an advert for a single by The Who is an in-joke on the show’s name? 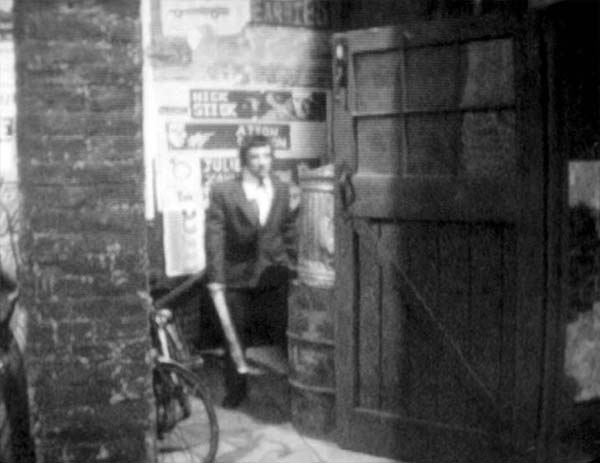 This alleyway appears in episode one

The Dalek plan in this story, even by their standards, bless them, is really quite rubbish. 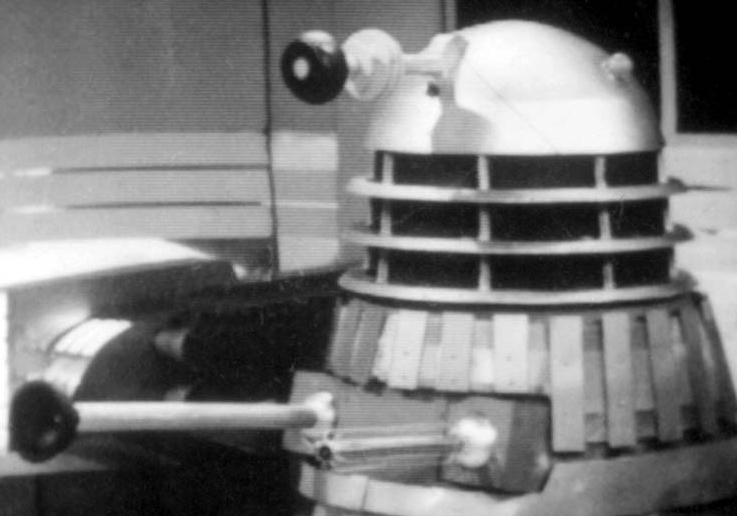 A Dalek thinking about a cunning plan. 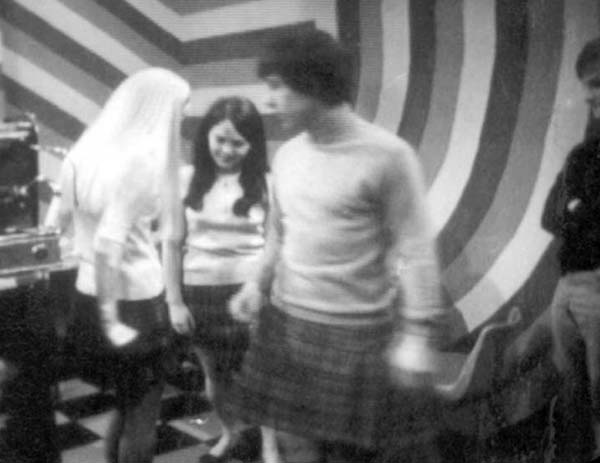 Jamie in the swinging sixties

Apart from being lost, there’s also a rights issue with the surviving audio of this story because the Beatles Paperback Writer was actually included as the background music in the swinging sixties café bar scene, but has had to be digitally erased from the soundtrack.

Just for extra nerd points here, there was a screening in advance of the release at the BFI in London, and I would have desperately loved to have seen it on a big screen – BUT – I figured having held out for all of my adult life from finding out what the story was, it would have been weird to then suddenly watch it in one seven episode block while desperately trying to avoid over-hearing spoilers at the bar and in the toilet breaks!

Anyway, that’s my thoughts on Evil of the Daleks. I guess I’ll shortly be posting my thoughts on the Galaxy Four animation. And previously on this blog you could read my thoughts about The Invasion, Dragonfire, The Web of Fear and Respond to All Calls. I also write the episode recaps for the new series for the Guardian now, and you can see what I thought of The Halloween Apocalypse and War of the Sontarans over there.

by Martin Belam, November 9, 2021
I do social and explaining stuff at the Guardian. As a journalist and designer I’ve spent nearly twenty years building digital products for the likes of the Guardian, BBC, Daily Mirror and Sony. I also make electronic music about the paranormal under the name m-orchestra. I’m @MartinBelam on Twitter, and martin.belam@theguardian.com on email. Sign up to get my blog posts sent to you via email.
← Friday Reading S12E05
Friday Reading S12E06 →