[This is part of an occasional series where I ramble without much focus about an old episode of Doctor Who what I have just watched on my tellybox or a new one I listened to on my pocket computer device.]

I’ve been following the Doctor Who: Redacted podcast on BBC Sounds with interest. Not quite enough to listen to each episode the second it drops – I think I am now two weeks behind – but enough to go “Oh no spoilers” and skip pass the promos for it on the BBC’s social media channels and make a mental note that I must catch up. 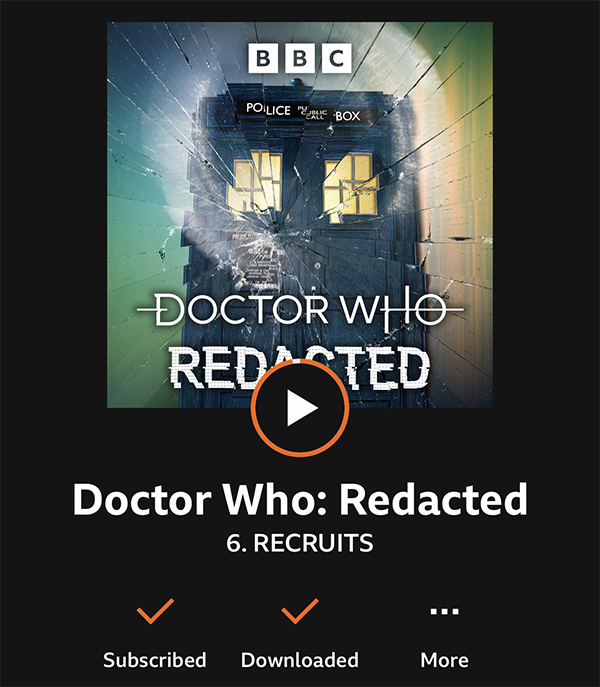 There are two things that I think are interesting about it:

It isn’t aimed at me and that is perfectly fine: One of the huge issues I think with fandom in general at the moment is the idea that absolutely everything in a franchise needs to be aimed at the die-hard fan. This isn’t aimed at me. It’s very queer, it’s very YA novel, it’s full of pop culture references I just about get. It’s something different to the TV series but set in the same universe.

People under the official social media accounts freaking out because they don’t recognise any of the three main characters and it’s all women and one of them is trans etc need to chill the fuck out, bloody weirdos.

It is interesting to hear a Doctor Who audio design that isn’t done by Big Finish: We are so used to the brilliant work that Big Finish do, and have been doing for 1,057 decades, but it is kind of fresh to hear a different sound design on a Doctor Who story.

I’m not quite sure how I’d classify the difference, it has more contemporary music stings, less harking back soundwise to anything we’ve seen on TV, but it’s also quite dry. Big Finish have made a big play of control rooms having hums and bleeps in the background, re-using the old Radiophonic Workshop backgrounds for different planets etc, but earthbound and mostly alien-free, Doctor Who: Redacted has had more of a close-mic natural feel to it.

Not saying one approach is better than the other, it was just something I found quite interesting to realise.

Ummmmmmmm, that’s it. They are usually longer than this :-)

by Martin Belam, June 9, 2022
I do social and explaining stuff at the Guardian. As a journalist and designer I’ve spent nearly twenty years building digital products for the likes of the Guardian, BBC, Daily Mirror and Sony. I also make electronic music about the paranormal under the name m-orchestra. I’m @MartinBelam on Twitter, and martin.belam@theguardian.com on email. Sign up to get my blog posts sent to you via email.
← Some thoughts about Andrew Fletcher and Depeche Mode
Friday Reading S13E22 →